Keanu Reeves Is Building Custom Bikes, And They Look Awesome

Keanu Reeves has been a lot of things during the course of his decades-long career: Professional football player in “The … Continued 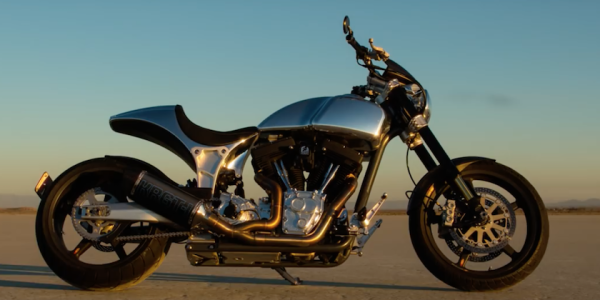 Keanu Reeves has been a lot of things during the course of his decades-long career: Professional football player in “The Replacements,” undercover surfer cop in “Point Break,” time-traveling teenage doofus in “Bill and Ted’s Excellent Adventure,” little league coach with a gambling problem in “Hardball,” and much, much more. But there’s one role he’s reserved for real life: Gearhead.

Over the past decade, Reeves love for motorcycles and the open road has evolved into an obsession, as well as something of a career move. Just ask Reeves’ friend Gard Hollinger, a renowned motorcycle designer known for his relentless perfectionism. Together, the unlikely pair foundedArch Motorcycles, a Hawthorne, California-based bike company that will build you a custom motorcycle — called the KRGT-1 — for $78,000 a pop (after a $15,000 deposit, that is).

As far as we can tell, the KRGT-1 is worth every penny. Powered by 2,032cc V-twin engines and 121 horsepower, these beautiful beasts cruise easily at 100 miles per hour and are equipped with a 200 mile fuel radius. And, despite their nearly 550-pound frames, they’re far from clunky. Every bike is custom built with over 200 handcrafted parts and meticulously assembled by Hollinger and his team to maximize efficiency and comfort while maintaining a sleek exterior.

“It’s a bike that’s really confident feeling going straight,” Reeves said in arecent interview with Bloomberg. “Our bike has a lot of torque—115 pounds—so whenever you get on the throttle, you really feel the pull and push of the motorcycle. It can turn and handle.”

When you take a closer look, it’s no wonder Reeves is so committed to these bikes — they’re modeled after a custom motorcycle Hollinger built for him back in 2007. Their goal was simple: to construct a bold, beautiful bike that can fly. Although Hollinger was confident Reeves would like the final product, he didn’t expect the Hollywood star to love it so much that he’d want to start his own motorcycle company. But that’s exactly what happened.

“I told him, ‘OK, the reason that we should do this is because the machine is amazing, and we’re going to die’ ,” Reeves told Bloomberg. “Let’s make something.”

The deal is simple. Hollinger personally designs the bikes based on iterations of Reeves’ original KRGT-1 and the actor tests them out to make sure they’re road-ready. This means Reeves gets to give every bike a whirl around the California backroads before they leave the shop for good. Not a bad gig.

However, getting your hands on a KRGT-1 isn’t easy. Arch won’t specify the number of motorcycles they’ve sold over the last few years, but Hollinger expects to make around 30 custom bikes this year — pretty impressive since it took three years to finish Reeves’ original prototype and get the final model to production.

It now takes about 90 days for Arch to design and construct your very own KRGT-1, which includes custom paint, metal finishes and engraving. There’s no question it’s worth the wait when you consider Hollinger fits the handlebars, pedals, seat angle, and suspension to match each rider’s unique body type and riding style.

Where does Reeves’ need for speed come from? My personal guess is his role as a misfit teenage drag racer in “Parenthood” had something to do with it. Regardless, he and Hollinger are shaking things up at Arch and have no intention of slowing down — like that bus from “Speed.” Get it?