The Marine Corps Commandant, Gen. Robert Neller, wants a sci-fi-inspired holodeck so he can war where no one has warred … Continued 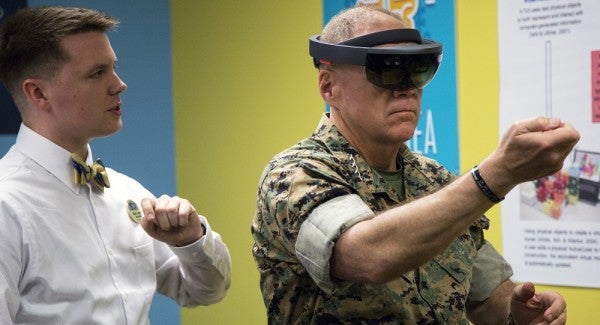 The Marine Corps Commandant, Gen. Robert Neller, wants a sci-fi-inspired holodeck so he can war where no one has warred before, reports Marine Corps Times.

“In a perfect world, it would be like Jean-Luc Picard in Star Trek,” Neller said. “I’d walk into the holodeck and I’d go, ’Computer, Battle of Waterloo, 1812, Prussian army, I am in command, simulation — go.’”

In his comments at the annual Modern Marine Expo at Quantico, Virginia, last week, Neller said he wants to take simulated training — which is currently used to help get individuals up to speed on weapons and vehicles — further than the service has gone yet.

“What I’m looking for is a simulation where a battalion or squadron commander or a regimental or a group commander or a division, wing or MEF [Marine Expeditionary Force] or a corps commander can go in and not have to put thousands of people on the battlespace and in the air and actually get them to do a repetition,” Neller said. “That is going to take some time.”

Related: Infantry Marines Can Now Train For Combat Without Ever Leaving The Barracks »

The service is still trying to determine just how feasible it would be to create a virtual wargaming facility at Quantico, Marine Corps Times reports, but it does plan to increase the frequency of simulated wargames it runs, raising the annual number from 11 to 20 over the next several years.

Militaries the world over have always looked to science fiction for ideas. The Army’s Research Laboratory recently drew some inspiration from James Cameron’s Aliens with plans for a robotic third shooting arm for stability, and both U.S. and British arms developers are working on space-age pieces of headgear. Let’s not forget all the drones, hoverbikes, and terminators. This isn’t even the first time the Marine Corps has tried to rip off Star Trek, with the service teasing the possibility of battlefield-ready tricorders — ahem, “innovative scanners” — last May.

That said, being able to recreate past fights, or simulate future ones on a grand scale could be pretty useful to battlefield commanders. Simulators for ground troops are fast becoming par for the course, and with good reason. As Task & Purpose’s Sarah Sicard reported in August, virtual training allows troops to get familiar with real-life scenarios, so they can make the most of costly large-scale live-fire training exercises, essentially pre-training for real-life exercises.

Extending that opportunity to a battalion, regimental, or division commander, seems like a natural progression. Besides, who doesn’t want to step up to a console and say: Computer, engage.