How Did Taliban Fighters Get Their Hands On US Special Operations Gear?

Taliban fighters are packing new American-made heat — at least, according to their propaganda videos. A recently released 70-minute video... 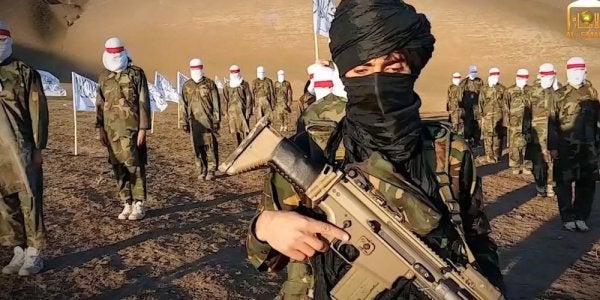 This isn’t the first time the FN SCAR has been observed in the hands of Taliban forces. Footage released by the Taliban in 2015 appears to show militants operating a captured Humvee and FN SCAR-H heavy rifle variants during a May assault on an Afghan National Army base in Afghanistan’s Kunduz province The group subsequently released photos of militants wielding the firearms, allegedly captured from ANA personnel.

An Afghan Taliban fighter holding what appears to be an FN SCAR rifle circa August 2015.Photo via THE FUCKING TALIBAN

That Taliban forces are rocking U.S.-made guns and equipment should come as no surprise. A non-declassified 2016 Department of Defense audit revealed that poor record-keeping and regulations had allowed nearly half of the 1.5 million firearms provided to Iraqi and Afghan security forces since 2002 to go missing, including nearly 978,000 M4 and M16s. An earlier 2014 report from the Special Inspector General for Afghanistan Reconstruction found that some 43% of weapons provided to the Afghan National Security Forces likely ended up in the hands of ISIS or the Taliban. (The FN SCAR is not explicitly listed in the report).

But the presence of the FN SCAR in the Taliban training video is something of a mystery, given that the only military personnel to utilize the rifle are U.S. Special Operations Command. SOCOM forces have fielded variants of the SCAR since 2009, five years after the command selected and tested the Belgian-made weapon for the Special Operations Forces Combat Assault Rifle Program. The 75th Ranger Regiment became the first large unit to deploy with the SCAR, arriving in Afghanistan with some 600 of the high-powered rifles.

So how, then, did this SCAR move from the hands of highly trained U.S. commandos to jihadi militants? “It would be more likely that the weapons were captured during an assault on a checkpoint, rather than raiding an armory or a base,” Operation Resolute Support spokesman Capt. William Salvin told Military Times. “However, we can't confirm where the weapons came from observed in the video.”

A U.S. Navy SEAL with the SCAR-H STD (Mk 17)Photo via DoD/Wikimedia Commons

Though the relationship between ISIS and the Taliban has been fraught in recent years, the two groups reportedly in August 2016 forged what the Wall Street Journal characterized as “an alliance of convenience” to wage war against U.S. military personnel and Afghan security forces amid the jihadi resurgence that followed the official end of NATO-led combat mission in 2014. That relationship could account for the flow of captured SOCOM equipment from ISIS forces to Taliban militants over the last year.