The Army seems to go through ground mobility vehicles about as fast as it goes through different uniforms. In the... 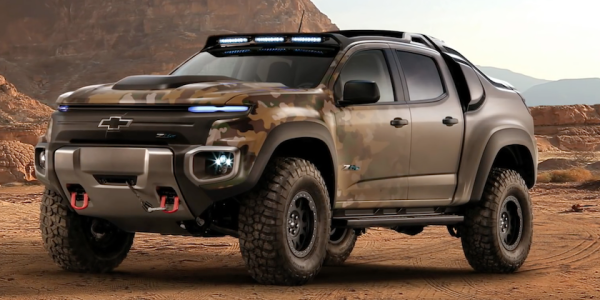 The Army seems to go through ground mobility vehicles about as fast as it goes through different uniforms. In the last fifteen years, the Humvee, Stryker, and MRAP, which are responsible for safely transporting our troops in combat zones, have all been fielded throughout the force and seen heavy use in combat theatres. Now, the Army is considering a more maneuverable option that boasts groundbreaking fuel technology and bears little resemblance to its heavy-handed predecessors: a Chevy Colorado ZH2 pickup truck.

The Army will officially begin testing the Chevy Colorado ZH2, which is being developed by GM and the U.S. Army Tank Automotive Research, Development, and Engineering Center (TARDEC), in May, according toIHS Janes. Few details have been released to the public, but we know the truck sits at more than six feet tall and seven feet wide on a stretched mid-size pickup chassis. If fielded, it would be the first combat vehicle powered by a hydrogen fuel cell. This means that the vehicle would be significantly quieter and also carry a lower heat signature, which is important as the battlefield becomes more technologically-advanced.

The ZH2 also integrates an Exportable Power Take Off (EPTO) unit — basically, a generator. This will allow soldiers to bring power to areas where it is not readily available, like remote combat outposts (COPs), or allow a reconnaissance element to stay in their observation post (OP) longer while keeping their communications and surveillance equipment operational. This could lend a game-changing capability to military units, whether they are in a city that had its power knocked out from airstrikes, or patrolling on the steep back roads of the K-G Pass in Afghanistan.

It should be noted that, because of its compact design, the ZH2 would not be a total replacement for the MRAP or Stryker, both of which are capable of carrying squad-sized elements. Judging by the concept photos, the ZH2 appears to be capable of carrying four soldiers in full kit, with one additional soldier as a top gunner. The first thing that comes to mind for such a configuration is that it would be a perfect fit for the type of mounted reconnaissance conducted by U.S. Army’s cavalry scouts. But is it really necessary? That depends on whom you ask.

Staff Sgt. Sean Harrington, a former cavalry scout, weighed in on the vehicle concept in a recent interview with Task & Purpose. “I think scouts have too many vehicle platforms as it is,” he said. “Humvees, Strykers, the BFV, and MRAP are all used in reconnaissance units throughout the Army, so where would this new vehicle fit in?” Harrington, a veteran of four deployments to Iraq, elaborated further, saying, “I think we have plenty of equipment that will do the job and we should probably stick with what we have.”

The existing platforms are far from perfect though. The MRAP is prone to rolling over, and Strykers don’t provide the agility that a pickup truck does. Because of those issues, not everyone in the field is ready to dismiss the ZH2 just yet.

Related: The Army’s Humvee replacement marks the end of an era >>

“I like the fact that it is a smaller, more nimble platform,” said Staff Sgt. Doug Jones, another former cavalry scout. “Traditional roles for the Cav include reporting to help shape the commander’s initiative or intent. If the vehicle allows for a more silent and low heat signature approach to screening, it’s got a lot going for it.” The two-time combat veteran did, however, have two major concerns: Will the truck require specialized mechanics? And more importantly, how would the hydrogen fuel cell react in an IED explosion? We won’t know the answers to those questions until the Army completes testing of the ZH2, which begins in May.

Regardless of what the tests show during the evaluation, the end users – the soldiers on the ground – are ultimately the ones who will make the difference in combat. And they will want to know two things: Does this new piece of equipment help me accomplish my mission more effectively than the current equipment, and will this equipment increase my combat survivability? Only time will tell, but as the famous General George S. Patton once said, “Wars may be fought with weapons, but they are won by men.” General Motors and the Army’s top brass will do well to remember that as they evaluate the Chevy Colorado ZH2 in the coming months.