A Vet’s Advice On Dehydration And How to Avoid It 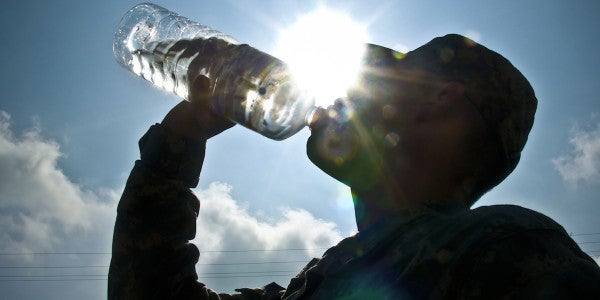 As the mercury rises — and we are in the thick of it — it can be hard to keep hydration at an optimal level to ensure quality exercise, avoid fatigue, and prolong endurance. Soldiers, sailors, athletes, spouses and kids; no one is immune to dehydration.

Dehydration is a general term used to mean loss of water. There are several kinds of dehydration, but for my purpose here, I want to talk about the most common kind, which occurs when water intake isn’t enough to replace free water lost. Your body can lose water through normal physiologic processes like going to the bathroom, sweating, and simple exhalation, or abnormal processes like throwing up, diarrhea, or blood loss.

Anyone who’s been to the sandbox knows what it’s like to drag ass; every endurance athlete has battled a poor performance; every booze hound has faced an awful morning because of it. I’ve been all of the above: sandbox dweller, athlete, and booze hound, and all to the extreme. Dehydration ain’t pretty. But I know how to fight and even prevent it.

In 2008, I raced Ironman Arizona and it was a toughie. In the words of Ironman columnist Lee Gruenfeld, “Temperatures in the mid-90s and enervating winds on the outbound leg of the three-loop bike course conspired to plant this season's opening event firmly into the record books as having the third highest dropout rate in Ironman history. Nearly 18% of the field failed to make it to the finish line.”

As I rode past both elite and amateur athletes under emergency medical care on side of the road, I decided to double my gatorade intake. During the run, I chowed on bananas for potassium and drank water for hydration, broth for salt, and cola for sugar.

Whatever I did was just enough because I was on the edge of collapse. I’ve never written about that race, but let’s just say, I finished, barely, covered in my own throw up. I’d properly hydrated before the race, but I hadn’t taken in enough electrolytes and micronutrients to allow me to finish strong. Lesson learned.

Anyone’s body can begin to fail due to dehydration. Milder symptoms include thirst, headache, fatigue, and irritability. As a dehydration situation becomes more dire, failure of the mind follows. Then we start looking at severe symptoms: delirium, dangerous spikes in heart and respiration rates, shock, and fainting.

Registered dietician Nutritionist Sara Burrill, a Navy veteran and one of my two favorite sisters, explains, “If a healthy, well-hydrated person loses 15% of bodily fluids, organs can begin to fail. A person of average health will see similar symptoms at 12% fluid loss.” As organs fail, you die. Don’t die.

Before you shrivel into oblivion, drop your kid, or pass out on the track, implement these ways to stay hydrated.

You can last for days without food, but water is absolutely essential to bodily function. Follow the “8×8” rule (eight eight-ounce glasses each day) as a baseline and increase as weather or conditions dictate. I suggest eight additional ounces of fluid for every 15 minutes of vigorous activity. I take in a gallon of water per day, at a minimum, but keep in mind that drinking too much water can lead to hyponatremia. I recently went through this when too much water in the body diluted the sodium content in my blood. So be smart and at least get your 8×8 down the hatch.

If you are banging out workouts like a boss, weigh yourself before and after, even if you’re sipping during the workout. For every pound you lose, drink an additional 16 ounces. Losing too much water during the course of a workout leads to muscle cramps, dizziness, and loads of other complications. Have hydration nearby with every workout. Run with a handheld bottle, sports belt, or your camelback. (Mine is camo and I think it’s pretty badass.)

Check out your urine. It should be a pale yellow. Anything too dark indicates dehydration, but keep in mind certain foods, like beets and supplements, can alter the color. If your pee is clear or borderline clear, you might be overly hydrated. This isn’t exact science, but can be helpful, especially when your kid is acting out of whack after a park play date.

Foods carry varying levels of water. According to the U.S. Department of Agriculture’s nutrient database, cucumbers top the water-logged fruit and veggie scale at 95% and have a decent nutrient content, watermelon is 93% water and full of trace minerals, and strawberries come in at 92% and a healthy dose of fiber and vitamin C. Bananas don’t have as much water, but are potassium rich, one of those trace minerals essential to bodily function. Celery and lettuce aren’t as nutrient rich, but pack serious hydration. I throw them and/or bananas into my mixer and make calorie and nutrient-rich smoothies as meal replacements when I’m on the go. Here’s an example recipe from my blog, and every month I have a superfood smoothie column you can check out in Iron Man magazine.

Sad as it may be, alcohol is dehydrating and should be avoided before any strenuous activity. It’s also taxing on the body to exercise or do hard work with a hangover. My college days of waking up with a buzz and running Boston’s Charles River are over. That’s what happens when you get old; you get a little smarter about these things, hopefully.

Plan ahead to avoid dehydration. Carry water with you throughout the day and drink it before you get thirsty. If you have a big workout or upcoming mission, up your intake and stay off the sauce. Use common sense. Your body will thank you with heightened performance, clarity of mind, and radiant skin.

Being dehydrated in the field can mean life or death. You owe it to you comrades and loved ones to be operating at an optimum level.