For This Marine Vet, Warrior Games Are About Pushing Through The Pain

The heavy metal disk soars through the air, and Sarah Rudder’s sea-green eyes follow it as it lands in the... 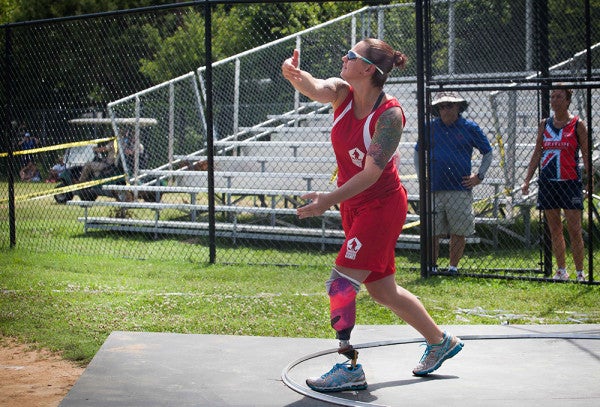 The heavy metal disk soars through the air, and Sarah Rudder’s sea-green eyes follow it as it lands in the sand of the baseball diamond during the 2015 Warrior Games, where Rudder is competing for the first time, in track, field, swimming and volleyball.

The distance is marked, and as she walks back toward the shade to escape the 90-degree heat and humidity, an athlete with the Air Force team gives her a friendly pat on the shoulder. Rudder — a Marine veteran from Hawthorne, California — is playing for her branch, but the easy camaraderie between contenders is one of the many things that makes this competition unique.

This year’s Warrior Games, at Marine Corps Base Quantico, Virginia, brought more than 250 military veterans and active-duty personnel together to compete in adaptive sports. Each athlete has not only trained and prepared extensively for their events, but has overcome physical injury as well.

“It feels awesome,” Rudder said, referring to the chance to compete that day. “It let me know that I can compete just like anyone else on the same disability as me and be able to level the playing field.”

Marine veteran Sarah Rudder, 32, poses for a photo after taking part in the discus competition during the 2015 Warrior Games, June 23.

As a administration specialist stationed at Headquarters Marine Corps, Rudder was in the process of being promoted to the rank of lance corporal in a building across the street from the Pentagon on Sept. 11, 2001.

She was among the Marines assigned to search and rescue after American Airlines Flight 77 was hijacked and crashed into the Pentagon. While helping with rescue operations, Rudder suffered a fracture up her left leg. Rudder endured numerous surgeries until her leg was amputated last year. Now, just a year later, she’s walking and competing.

Rudder was walking with crutches in the days leading up to the competition, after bruising the bone on her amputated leg. But when it came time to compete in her event, the pain didn’t stop her.

“I came out here and put my leg on and I’m just doing my best,” said Rudder, mirroring the sentiment of a common military adage: Dig deep, keep pushing.