When it comes to crushing the Marine Corps Physical Fitness Test, it’s all about the pull-ups. Sure, if you can... 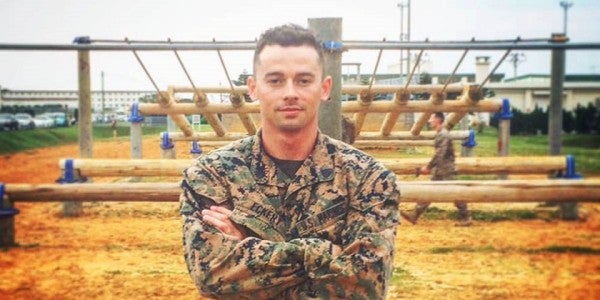 When it comes to crushing the Marine Corps Physical Fitness Test, it’s all about the pull-ups. Sure, if you can lope along like a gazelle and snag an 18-minute three-mile-run, you’re well on your way to a perfect score, but you still need to max out on pull-ups. With the Marine Corps’ new PFT changes, men between 21 and 35 will need 23 pull-ups for a perfect score, while women of the same age will need between nine or 10.

For those who aren’t built like jackrabbits and can’t count on a fast run time, knocking out as many reps on the bar as possible is going to be essential if you want a first-class PFT score. That’s why we reached out to Michael Eckert, the Guinness World Record holder for most pull-ups in one minute — the official count is 50 — and until recently, a sergeant in the Marines. Just before Eckert left the Corps in March, he broke his wrist while competing for American Ninja Warrior, but that hasn’t kept the 26-year-old athlete off the bar. After two surgeries, physical therapy, and a metal plate in his arm, he’s starting over again at 10 pull-ups and working his way back to the top.

“All the recommendations I’ve given everybody else for pull-ups, I’m going back and taking those steps myself,” Eckert told Task & Purpose.

Related: How To Crush Your 2-Mile Run Like An Olympian »

So, if you’re hovering around 10 or 13 pull-ups and want to start blasting out reps on the bar for that upcoming PFT, here’s what you should do to hit your max:

“The first thing I tell everyone is you’ve got to work from the fingertips, back,” Eckert explains. “Everyone tries to just slam out their back muscles — working out their lats — or working out their biceps, triceps. They try to slam all the big muscle groups first, but they neglect all the small muscle groups in your forearms and fingertips: your hand strength and grip strength. That’s all huge in pull-ups. Grip strength and pull-ups go hand-in-hand, 100%.”

“I do a super set between bicep curls and weighted dumbbell walks. Just take 70% of your max curl weight, and do about 20 reps of that,” Eckert says. “From there, without putting the weights down, go for a 50-foot walk, down and back. It’ll burn out your biceps and work its way down to the forearms, as well. It’s a good way to fatigue your arms as much as possible and does a lot of what the pull-ups will do.”

Fortunately, you don’t need fancy equipment to build up that forearm and finger strength: Just find a ledge. “I recommend doing ledge pull-ups, or at least hanging on flat ledge as much as they can,” Eckert says, adding that it’s best to do this after you’ve already worked out the larger muscle groups; that way they’re not overcompensating. “You really want to work fingertips, then hand strength, then forearms, biceps, rear deltoids, and back.”

“The secret weapon when it comes to pull-ups is ab straps,” Eckert says. “The reason being, While you’re hanging in those things and doing a core workout, it’s working the exact muscles you’re going to want to work when you’re doing pull-ups. It’s going to be working those inner lats and a little bit of your obliques.

“A lot of people don’t stress core when they’re doing pull-ups, but it has a huge role when you’re actually performing them. It’s going to stabilize your body so you’re not swinging. If you train three days a week on those things, you’ll be doing more pull-ups in no time.”

“For me, people could say it’s a mental thing, but I never cross my legs when training for doing pull-ups,” Eckert explains — noting that if he’s going for a world record, he may cross them to keep his body tight, because at that point it’s about doing “whatever it takes to get the amount you need.”

The reason not to do it while training is because keeping your legs straight keeps your body nice and loose. Plus, when you cross your feet, it raises your hips a little higher on one side than the other — and if you’re doing a ton of pull-ups, eventually your muscle strength might become imbalanced or uneven, with one side overcompensating. Keeping your legs straight will help keep your muscles more symmetrical.

Tack a mini-workout onto morning PT.

For civilians, building a solid physical fitness foundation can be a bit of struggle. Not so for Marines. Every day, five days a week — and on the weekend, if your platoon sergeant is a hardass — they’re hitting the ground running, stopping only to knock out back-to-back flutter kicks, push-ups, or burpees. But if you want to dominate the bar and hammer out 23 pull-ups like it’s nothing, you’ve got to make it part of your daily routine.

“Take 20 or 30 minutes out of your day to go do some fingertip and forearm strength training after morning PT,” Eckert says. “Maybe even just 15 minutes, just something that’ll add onto your workout that’ll give you that strength training you need for your pull-ups.”

But don’t overdo it.

So, if you’re sore, maybe take a day off, but try to do something every other day. “Break it down, so one day is finger-strength training,” Eckert says. “Another day might be back and biceps, and maybe the next day is going to be core; that way, it’s a cycle.”