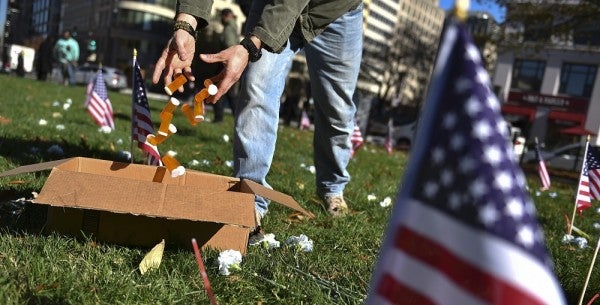 Two months after President Donald Trump declared the opioid epidemic a public health emergency, the Department of Veterans Affairs became the first hospital system in the country to publicly release the rates of its opioid prescriptions. On Jan. 11, the VA uploaded the opiate prescription rates of 144 of its medical centers and clinics in an effort to increase transparency over how and at what volume the department administers the addictive pain pills.

Notably, the data revealed that 99% of all VA medical centers and hospitals saw a decrease in opiate prescriptions between 2012 and 2017.

But it’s in Ohio, one of the states hardest hit by the drug epidemic, where the VA has the lowest rate of opioid prescriptions: 3% for the Louis Stokes Cleveland VA Medical Center.

“We started a culture, if you want to it call that, of evidence-based tests and practices of opioids for over a decade,” Dr. Ali Mchaourab, the chief of medicine at the Cleveland medical center, told Task & Purpose. “We did that because we knew all along that these medications are not the answer.”

In 2012, the VA began taking steps to reduce opioid addiction among veteran patients by adopting initiatives that decreased the number of prescriptions and medications dispensed — reducing overall opioid prescriptions by 41% over the past five years. Those steps involve non-drug treatment options for chronic pain, such as acupuncture, spinal manipulation therapy, chiropractic care, and yoga; non-opioid treatment options, in the form of anti-inflammatory, antidepressant, and anticonvulsant medications; and the careful monitoring of opiate prescriptions. To put it another way, it’s not about just cutting prescriptions but offering alternative means to cope with chronic pain.

In addition to the VA-wide mandate, Mchaourab says that the drop in prescriptions at the Cleveland facility is due to a mix of available resources and educating care providers on how best to prescribe opioids.

“The number is low, not because we just focus on the numbers,” Mchaourab said. “It’s because our providers, from primary care to the most specialized, have so many tools and so many things available to them, including complementary alternative medicine, advanced technology, surgeries — anything and everything that’s available in science, is available at the Cleveland VA. And that subsequently led to opioid utilization coming down.”

Beyond its 13-strong pain management team — which also benefits from a robust support staff of nurses and techs — one of the biggest advantages patients and providers at the Cleveland clinic have is time.

“Embracing this philosophy requires a lot of time on the provider side, and as you know, anywhere you go is a commodity,” Mchaourab told Task & Purpose. “Nobody can offer the time. … normally a patient is seen by a psychologist for 45 minutes and 45 minutes with a physician, because we want to take our time to understand the patient. We have a team of people to provide for the patient’s need, rather than seeing the patient quickly and providing a solution with a pill.”

The Cleveland medical center’s pain management program also uses teleconferencing to connect physicians with one another to stay on top of medical best practices and breakthroughs through weekly 90-minute training sessions. In a September 2017 editorial published in the online medical journal STAT News, Mchaourab notes that because opioid prescription rates vary widely across medical centers, and sometimes, even by “as much as threefold among providers practicing in the same hospital,” having a set of universally adhered to guidelines is crucial to curtailing the over-prescription of opiates.

“There are so many things that can be done other than being on a pill — but if that pill is needed, a low dose is needed, then we make sure that other things are being added as well so that his function and quality of life can be improved,” Mchaourab said. “And this is where safety and monitoring measures come into the picture.”

In 2016, illicit and prescription opioids were responsible for more than 42,000 fatal overdoses across the country. According to the Centers of Disease Control and Prevention, those numbers were five times higher in 2016 compared to 1999. Among veterans — many of whom were prescribed the highly addictive medication to treat chronic pain brought on by injuries incurred in military service — the numbers are more stark: They are twice as likely as civilians to die from accidental overdoses from the painkillers, Reuters reports.

But limiting opiate prescriptions across the VA is a tall order for a healthcare administration with more than 9 million patients — half of which suffer from chronic pain. Add to it that roughly 63% of all vets receiving chronic pain treatment also have a mental-health diagnosis, which can complicate a patient's treatment.

”There’s no way you can curb this problem by cutting patients off of medication,” Mchaourab said. “We don’t want them to feel judged because they’re on opioids. We’re successful because we want to provide them an alternative.”

If you are veteran being treated by the VA for chronic pain through prescription or alternative pain management and want to share your experience for future reporting, email me at James@taskandpurpose.com.