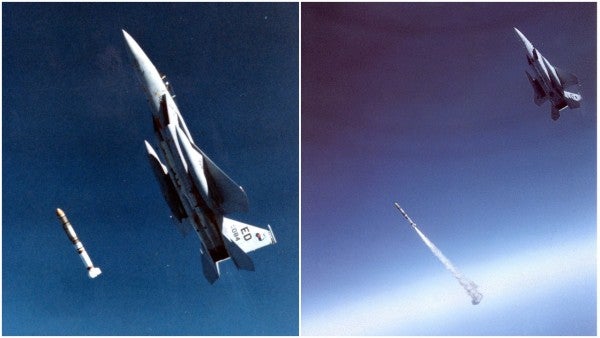 On September 13, 1985, an Air Force pilot pushed his F-15A into a steep climb at near-supersonic speeds as he prepared to launch into history. The pilot had prepared many months for what he was about to do: fire a heat-seeking missile towards a satellite the size of a 1969 Volkswagen as it hurtled through orbit at five miles a second. Basically, he was about to hit a bullet with another bullet, which would require absolutely perfect timing. But the pilot was ready for it.

“After we left the tanker, I started getting very confident we were going to make our timing,” said Maj. Gen. Wilbert “Doug” Pearson Jr. (ret.), who was then a major. “Everything was looking just perfect as we flew out to the launch point.”

The G-forces piled on as Pearson climbed 7 miles over the Pacific Ocean at nearly Mach 1. He was about 200 miles off the coast of southern California, but his target, an aging weather satellite, was still over Hawaii, more than 2,000 miles west. That was just fine for Pearson, whose aircraft carried the ASM-135, a missile purpose-built to hit that faraway mark.

At 38,100 feet, Pearson launched the missile, which blew through two rocket stages as it left the atmosphere. It then released a miniature homing vehicle that locked onto the satellite’s infrared image and rammed it at 15,000 miles per hour 345 miles above the Earth.

Pearson was too far away to see the hit or the 285 pieces of debris that scattered into orbit. Mission control back at Vandenberg Air Force Base also couldn’t tell him, since they were not using a secure channel and the event was considered classified. But the major had worked out a code with his friend Scott in the control room.

But when the time came, Pearson didn’t need the code to figure out what happened.

“When Scott keyed the microphone, he couldn't get a word out because all the screaming and yelling at the control room totally overrode him,” Pearson said. “I had a pretty good idea we'd hit it at that point.”

How did Pearson become the first pilot in history to shoot down an orbiting satellite, and why has nobody done it since? The decorated aviator talked about it with Task & Purpose earlier this summer:

Why was it necessary to shoot down a satellite from an aircraft?

The real reason we were trying to do this was at the time the Soviet Union had developed a robust capability of putting up very small satellites that could keep up with where our military forces were, primarily our ships at sea.

At the time, we had the ability to show up a couple of hundred miles off somebody’s shore and it could be pretty intimidating. But with overhead photography, they could keep up with where our carriers were. So we couldn't surprise anybody to the same extent.

Our program was designed to do that with an airplane because you don't know exactly where the target’s going to appear. A ship can't move very fast, and a ground-based system can't move very fast or at all. If a target comes in your area it pretty much has to come right over your base or your ship. But an airplane can move fairly fast and has a range of plus or minus 500 miles from its operating base. So that's why an airplane was looked at.

It was the real racehorse of the fighter community. And it was big enough and powerful enough that it could carry a fairly large missile on the centerline. So it was the perfect choice. And it had good navigation capabilities, very reliable, and it could operate from many bases along the East or West coast.

What did you have to do as a pilot?

You know, we launch big rockets from Cape Canaveral or Vandenberg or other places. They're very known, precise locations on the face of the Earth. You can do all the math so that all the angles and accelerations are perfect.

Related: This is the Space Force's first offensive weapon

The other most significant variable was time because the intercept was calculated very precisely. So the pressure for the pilot was to be at that point on those conditions at exactly that time. We developed algorithms to do that which ended up in later airplanes, such as the F15E and others, for conducting very precise attack timing or resupplies or other things. It was a good example of how one development program helps another.

Was that nerve-wracking? Did you have a lot of butterflies in your stomach to try to hit those markers?

I wouldn't call it butterflies but it was certainly a lot of pressure. But in the test business, preparation, training, and discipline all come together so that when you go to execute something that you've worked on so hard for so long, the confidence is there. There weren't a lot of questions of whether or not it was going to work, the question was just making everything come together so it would work. And it did. But yes, there was a lot of pressure and high expectations.

I often say everything that could go right did go right on that day. And this wasn't a shoot-from-the-hip kind of a thing. We had worked our tails off and a lot of really smart people around the world had invested a lot of effort to make this come together. There were probably a thousand people around the world that made it successful. So it's hard to talk about just the day without all the things that went into it.

Why was the missile program discontinued?

I don't know exactly what happened, but we demonstrated we could do it. And we made it look relatively easy. It wasn't, but it looked that way. The Soviets had been trying to do exactly the same thing so they knew how hard it was. There was some incentive on their part to negotiate some things, and I think the President used that to his advantage. I think there were some fairly high-level political negotiations that said, “you don't do that, we won't do this.”

I think the other big factor is that this was one way, a physical way, to defeat satellites in orbit. At the same time, other technologies were in development to defeat them in other ways, maybe electronically. The system we had was pretty expensive in terms of rockets, airplanes, bases, and all that. So I think it was a multi-factor decision and a year later we were told to stand down, no more tests.

Would the U.S. ever need a hit-to-kill anti-satellite missile again? Or do you think that's not going to be used anymore?

I think it'd be a very special case where you would want to do that. They’re relatively awkward, and it takes a lot of infrastructure. The big deal is it creates a lot of debris, and debris doesn't just hurt the bad guys. It hurts the good guys.

Space is a big place, but we all like to operate in the same regions. It's kind of like going down the interstate: you can drive across the desert if you really wanted to, but it's a lot more comfortable to go down the interstate. In space, there are some interstates, if you will, for satellites. You don't want a lot of debris there or, you know, you have nails on the interstate.

And I think with cyberattacks if they can attack your computer in your office, why can't they attack a computer in orbit? There may be alternatives today that exist that are far more elegant and maybe just as effective, and maybe not as permanent. You have to ask yourself, do you really want to sink the ship, or do you just not want the ship near your base? So no simple answers, and I'm not trying to avoid it. It's just a complicated answer.

When I Google “Doug Pearson” or “satellite kill” it looks like an article comes up about this every year or more. Why do you think people find the story so fascinating?

Well, I have to admit, I ask myself that from time to time. It’s very interesting and fascinating, maybe because it's kind of the new frontier. And now we have a separate Space Force, much like what happened in 1947 for the Air Force. I think that brings us back to some of the early military-like operations in space and certainly, ours was the first highly publicized, if you will, military operation in a weapons-related way.

And I think people often find things blowing up interesting and fascinating. There are a lot of video games that blow up things and we actually went and blew something up.

Does it ever make you sad that the program didn’t continue, like you may be the last of your kind?

I hadn’t thought about that so much. I was thinking more about the capability, and I want to make sure that we, the United States of America, have the ability to defend ourselves.

I got into the flight test business because I was addicted to aviation from a very early age. My father served in World War II as a flight engineer on B-24s, and when I was in grade school, I was fascinated with the test program at Edwards Air Force Base. Every day I'd come home, I’d get the Shreveport Times and I'd read about what happened out at Edwards.

At the time, the X-15 program was the big deal: going higher, faster, and learning about the edge of space. I used to read about these great pilots that were flying the program: Pete Knight, Joe Engle, Bill Dana, [Neil] Armstrong, and those guys. They were these 10-foot, giant, godlike people to a 12-year-old. Never in my wildest dreams did I ever think I would meet one of them.

As it turns out, as life went on, several of them became very good friends: Pete Knight in particular. Pete set the record in the X-15, I think it was Mach 6.7, just over 4,000 miles an hour, and that record holds today. He's the only pilot to have gone that fast in an airplane. They’ve done it in space shuttles and things, but he used to kibitz about that, like “why haven't we ever gone beyond that?”

I think about that from time to time. The reason we never did it in his case was we learned what we needed to learn in that program. We know what happens at those kinds of velocities. We know airflow kind of becomes like plasma and all that sort of stuff. So we don't need a pilot to go do that again right now.

Maybe someday. So in my case, we don't need a pilot to go shoot down a satellite right now.