FACT: The United States Has ‘Nuked’ Itself 1,032 Times

The first test of a thermonuclear, or fusion, bomb took place on November 1952 at Enewetak Island. Nicknamed Ivy Mike,... 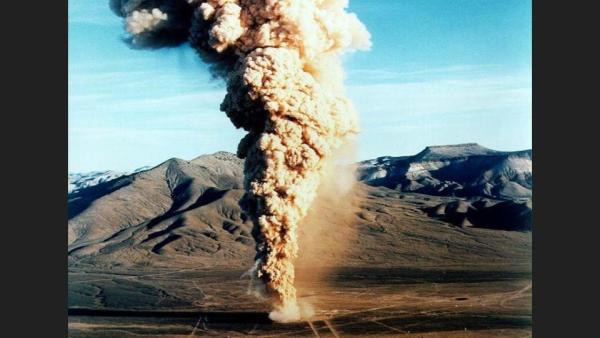 The first test of a thermonuclear, or fusion, bomb took place on November 1952 at Enewetak Island. Nicknamed Ivy Mike, the huge eighty-two-ton device was more of a building than a usable nuclear device. The device registered a yield of 10.4 megatons, or the equivalent of 10,400,000 tons of TNT. (Hiroshima, by contrast, was roughly eighteen thousand tons of TNT.) Ivy Mike was the biggest test by far, creating a fireball 1.8 miles wide and a mushroom cloud that rose to an altitude of 135,000 feet.

This view of downtown Las Vegas shows a mushroom cloud in the background. Scenes such as this were typical during the 1950s.

Nuclear weapons have a mysterious quality. Their power is measured in plainly visible blast pressure and thermal energy common to many weapons, but also invisible yet equally destructive radiation and electromagnetic pulse. Between 1945 and 1992, the United States conducted 1,032 nuclear tests seeking to get the measure of these enigmatic weapons. Many of these tests would be today be considered unnecessary, overly dangerous and just plain bizarre. These tests, undertaken on the atomic frontier, gathered much information about these weapons—enough to cease actual use testing—yet scarred the land and left many Americans with long-term health problems.

The majority of U.S. nuclear tests occurred in the middle of the Western desert, at the Nevada Test Site. The NTS hosted 699 nuclear tests, utilizing both above-ground and later underground nuclear devices. The average yield for these tests was 8.6 kilotons. Atmospheric tests could be seen from nearby Las Vegas, sixty-five miles southeast of the Nevada Test site, and even became a tourist draw until the Limited Test Ban Treaty banned them in 1963. Today the craters and pockmarks from underground tests are still visible in satellite map imagery.

The bulk of the remaining nuclear tests took place in Pacific, at the islands of Bikini, Enewetak, Johnson Island and Christmas Island. The second nuclear test, after 1945’s Trinity Test, took place at Bikini Atoll. The Pacific tests were notable not only for their stunning visuals, the most compelling imagery of nuclear weapons since Hiroshima, but also the forced relocation of native islanders. Others that were near tests were exposed to dangerous levels of radioactive fallout and forced to fleet. In 1954, the crew of the Japanese fishing boat Daigo Fukuryu Maru accidentally sailed through fallout from the nearby fifteen-megaton Castle Bravo test. Contaminated with nuclear fallout, one crew member died, and the rest were sickened by radiation.

The first test of a thermonuclear, or fusion, bomb took place on November 1952 at Enewetak Island. Nicknamed Ivy Mike, the huge eighty-two-ton device was more of a building than a usable nuclear device. The device registered a yield of 10.4 megatons, or the equivalent of 10,400,000 tons of TNT. (Hiroshima, by contrast, was roughly eighteen thousand tons of TNT.) Ivy Mike was the biggest test by far, creating a fireball 1.8 miles wide and a mushroom cloud that rose to an altitude of 135,000 feet.

One of the strangest atmospheric tests occurred in 1962 at the NTS, with the testing of the Davy Crockett battlefield nuclear weapon. Davy Crockett was a cartoonish-looking recoilless rifle that lobbed a nuclear warhead with an explosive yield of just ten to twenty tons of TNT. The test, code-named Little Feller I, took place on July 17, 1962, with attorney general and presidential adviser Robert. F. Kennedy in attendance. Although hard to believe, Davy Crockett was issued at the battalion level in both Germany and North Korea.

rater from the 1962 “Sedan” nuclear test as part of Operation Plowshare.

Also in 1962, as part of a series of high-altitude nuclear experiments, a Thor rocket carried a W49 thermonuclear warhead approximately 250 miles into the exoatmosphere. The test, known as Starfish Prime, had an explosive yield of 1.4 megatons, or 1,400,000 tons of TNT, and resulted in a large amount of electromagnetic pulse being released over the Eastern Pacific Ocean. The test, conducted off Johnston Island, sent a man-made electrical surge as far Hawaii, more than eight hundred miles away. The surge knocked out three hundred streetlights and a telephone exchange, and caused burglar alarms to go off and garage doors to open by themselves.

Nuclear tests weren’t just restricted to the Pacific Ocean and Nevada. In October 1964, as part of Operation Whetstone, the U.S. government detonated a 5.3-kiloton device just twenty-eight miles southwest of Hattiesburg, Mississippi. The test, nicknamed Salmon, was an experiment designed to determine if nuclear tests could be detected by seismometer. This was followed up in 1966 with the Sterling test, which had a yield of 380 tons.

In 1967, as part of a misguided attempt to use nuclear weapons for peaceful purposes, the United States detonated a nuclear device near Farmington, New Mexico. Project Gasbuggy was an early attempt at nuclear “fracking,” detonating a twenty-nine-kiloton nuke 4,227 feet underground just to see if the explosion would fracture surrounding rock and expose natural-gas reserves. The experiment was unsuccessful. Two similar tests, Rulison and Rio Blanco, took place in nearby Colorado. Although Rulison was a success in that it uncovered usable gas reserves, the gas was contaminated with radiation, leaving it unsuitable for practical commercial use.

Operation Buster-Jangle – Dog test — with troops participating in exercise Desert Rock I. It was the first U.S. nuclear field exercise conducted on land; troops shown are a mere 6 miles from the blast. At the Category:Nevada Test Site, Nov. 1, 1951.

A handful of nuclear tests were conducted in Alaska, or more specifically the Aleutian island of Amchitka. The first test, in October 1965, was designed to test nuclear detection techniques and had a yield of eighty kilotons. A second test occurred four years later, and had a yield of one megaton, or one thousand kilotons. The third and largest test, Cannikin, was a test of the Spartan antiballistic-missile warhead and had a yield of less than five megatons.

During the early years of nuclear testing it was anticipated that nuclear weapons would be used on the battlefield, and that the Army and Marine Corps had better get used to operating on a “nuclear battlefield.” During the 1952 Big Shot test, 1,700 ground troops took shelter in trenches just seven thousand yards from the thirty-three-kiloton explosion. After the test, the troops conducted a simulated assault that took them to within 160 meters of ground zero. This test and others like them led to increases in leukemia, prostate and nasal cancers among those that participated.

U.S. nuclear testing ceased in 1992. In 2002, the Centers for Disease Control estimated that virtually every American that has lived since 1951 has been exposed to nuclear fallout, and that the cumulative effects of all nuclear testing by all nations could ultimately be responsible for up to eleven thousand deaths in the United States alone. The United States did indeed learn much about how to construct safe and reliable nuclear weapons, and their effects on human life and the environment. In doing so, however, it paid a terrible and tragic price.