Some things never change, and in the Marine Corps, an institution where upholding tradition is the order of the day,... 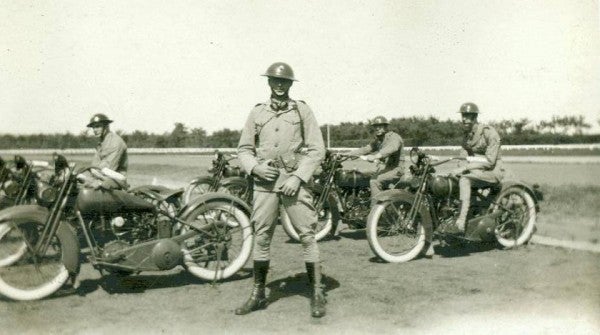 Some things never change, and in the Marine Corps, an institution where upholding tradition is the order of the day, this is doubly true. I’m not talking about eagles, globes, and anchors, immaculate uniforms, or having a high-and-tight, no, I mean the real traditions: the never-ending grunts versus pogs dispute, service rivalries, drunken shenanigans on leave or in the barracks. These staples of the Corps aren’t new, and they’ve provided ample material to enlisted Marines-turned-biting-satirists for nearly a century.

Long before Marine veteran Maximilian Uriarte captured the spirit of low-fade sporting, regulation-defying E-3s in the Marine Corps with his comic series, Terminal Lance, another enlisted Marine armed with pen and paper was hard at work immortalizing rank-and-file Marine Corps life in ink.

A collection of postcards and sketches from the Marine Corps Archives’ Walter F. Kromp collection capture the humor (and downright admirable levels of booze-fueled belligerence) of Marines stationed in Beijing, China, in the 1920s. Many of the illustrations, are still relevant today, like how shit always rolls downhill, regardless of rank.

It’s likely the artist, who signed the illustrations “Simpson,” served with the 4th Marine Regiment, dubbed the China Marines, a contingent of jarheads who won the lottery in terms of duty stations when they were stationed in Beijing between 1927 and 1941 to protect American citizens and interests there.

The postcards made their way to the Marine Corps “sometime prior to 1981” as part of a collection from a man named Walter F. Kromp, according to Chris Ellis, an archivist with the Marine Corps History Division. Beyond that, the details are pretty scant. It’s unclear if the postcards were ever published, but it seems likely that the artist was a Marine on embassy duty with a bit of extra cash.

“The Marines posted to China during this time period were primarily embassy guards, and they had a lot of free time,” Ellis told Task & Purpose in an email. “It is very common for us to get donation offers of highly decorative China Marine scrapbooks that are lavishly illustrated and bound in dragon-embossed leather covers.”

“These guys had money to spend, and there were many items made available to them for purchase,” he added.

While the source of these comics remains a mystery, some of the illustrations and their themes should be pretty recognizable to current and former enlisted Marines.

There’s the belief that dress blues make you a chick magnet:

There’s always endless speculation about where we’ll invade next:

Or if you’ll ever even deploy:

But no one forgets their first trip home after boot camp:

Whoever the mysterious illustrator was, we’re pretty sure he’d be pleased to know that his craft is being carried on by salty devil dogs almost 100 years later.