On July 27, 2016, a Korean War hero was posthumously awarded for battlefield bravery. The Marine honored by British and... 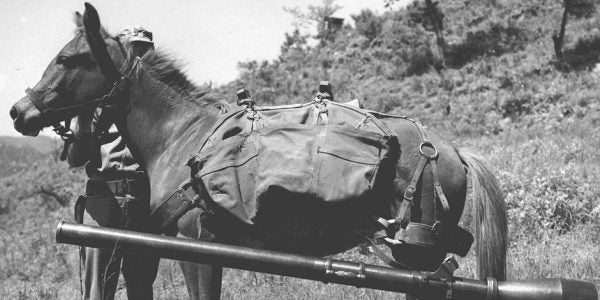 On July 27, 2016, a Korean War hero was posthumously awarded for battlefield bravery. The Marine honored by British and American military personnel in London was a horse named Sgt. Reckless.

Related: UNSUNG HEROES: The Military Dog Who Saved 4 Lives In An RPG Attack »

From 1952 to 1953, Reckless served alongside Marines during the Korean War as an anti-tank ammunition carrier with the 5th Marine Regiment. She was taught how to avoid barbed wire and to lay down when under fire. According to ABC News, over the course of a five-day battle, Reckless made 51 trips back and forth from an ammunition supply point and Marine firing positions. She carried 386 rounds of ammunition, which weighed more than 9,000 pounds, up steep mountains as enemy rounds impacted around her.

Not only did Reckless bring beleaguered Marines the supplies they needed to stay in the fight, she ferried the wounded to safety.

“She would carry wounded soldiers down the mountain to safety, unload them and get reloaded with ammunition to go back up to the guns. Although wounded twice, she didn't let it stop her or slow her down,” notes ABC. “There's no way to account for the number of lives she saved.”

An animal charity called the People’s Dispensary for Sick Animals posthumously honored Reckless with the Dickin Medal, the animal equivalent of the Victoria Cross. Reckless passed away in 1968 while at Camp Pendleton, California.