Want To Know How Mattis Got The Callsign ‘Chaos’? Here’s The Story 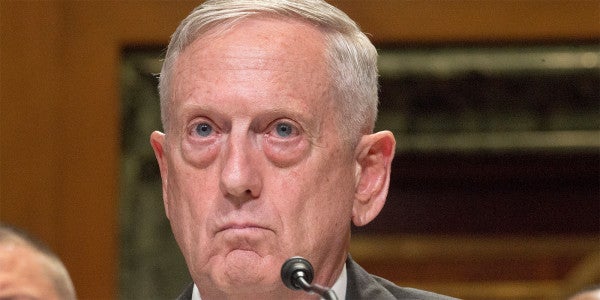 For years, it's been widely reported, often by the man himself, that retired Marine general and Secretary of Defense James Mattis has only one really acceptable nickname, the callsign that followed him through the service: chaos. But what about the affably blunt Pacific Northwest fly-fisherman and paternal, profane battlefield marshal suggests disorder and entropy? What possible explanation can a nickname like that have?

Reader, wonder no more. Marine Corps Times' Mackenzie Wolf reports that during Mattis' keynote speech at the Air Force Association's Air, Space and Cyber conference on Sept. 20, someone in the crowd asked about the “Mad Dog” moniker, which he brushed off as a media concoction. But in answering, Mattis decided to talk about the “Chaos” callsign.

“I must confess how I got that name,” Mattis started. Then he proceeded to tell a story about some very clever Marines who served under him:

When the call sign originated, the then-colonel was a regimental commander in Twentynine Palms where, according to Mattis, “there’s nothing to do but go blow up the desert.” As he was leaving his operations office, he noticed the word “Chaos” written on the operations officer’s whiteboard.

“I said, ‘What’s this about?’ I’m curious, you know. We all are. He says ‘oh you don’t need to know that,’” which only further piqued curiosity.

“Finally, he kinda said, ‘Well it means the colonel has an outstanding solution,’ and it was very much tongue in cheek, ladies and gentlemen. They didn’t consider all my solutions quite as outstanding as I enthusiastically promoted them,” said Mattis.

Marines: Never, never, never underestimate the cynical creativity of your S3. That's alright: Mattis looks like he was a good-natured, if stiff, fellow in those long-ago days.