On May 5, 1942, 29 men arrived at Recruit Depot San Diego for basic training in the Marine Corps. They would go on to develop and implement an unbreakable code that was used across the Pacific theater of World War II 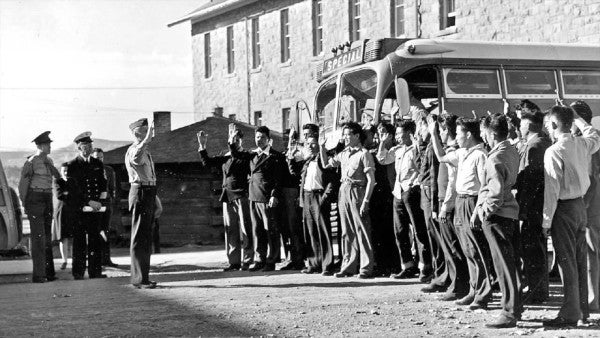 On May 5, 1942, 29 men arrived at Recruit Depot San Diego for basic training in the Marine Corps. They would go on to develop and implement an unbreakable code that was used across the Pacific theater of World War II — one which helped mask the movements of American forces from Guadalcanal, to Tarawa, Peleliu, and onward to Iwo Jima.

These men were the first of the Navajo Code Talkers.

However, according to a Facebook post by the Southern Navajo Nation News, it was on this day, 78 years ago that they swore the oath of enlistment.

“Early on the morning of May 4, 1942 the original twenty-nine Navajo Code Talkers boarded a bus at Fort Defiance and headed for Fort Wingate near Gallup, New Mexico,” reads the post. “After lunch in the dining hall at Fort Wingate, the Navajo recruits were sworn into the U.S. Marine Corps.”

The idea for the Navajo Code Talker program came from Philip Johnston, a World War I veteran and the son of a missionary who grew up on a Navajo reservation. According to the National Archives, Johnston convinced Marine Maj. Gen. Clayton B. Vogel that the Navajo language — due to it being largely unwritten — would be indecipherable to the Axis powers. Additionally, Johnston argued that the Navajo nation was large enough to supply enough recruits for the program, and isolated enough that it was unlikely that many people outside the tribe had learned the language.

Here's how Vogel articulated those concerns in a letter to the commandant of the Marine Corps:

Mr. Johnston stated that the Navajo is the only tribe in the United States that has not been infested with German students during the past twenty years. These Germans, studying the various tribal dialects under the guise of art students, anthropologists, etc., have undoubtedly attained a good working knowledge of all tribal dialects except Navajo.

However, that concern ended up being moot, as the Marine Corps largely saw service in the Pacific against the Empire of Japan.

In combat, the Code Talkers enabled Marines on the ground to safely transmit orders over radio and telephone lines without fear of the message being cracked — a fact which undoubtedly saved lives, with Maj. Howard Cooper, a signal officer commanding the Code Talkers, saying, “Were it not for the Navajos, the Marines would never have taken Iwo Jima.”

Of the roughly 400 code talkers who served during World War II, 13 were killed in action.