They Fought Against Commies In Korea. And They Say Trump Is Making The Right Move

President Trump’s announcement that he would meet with North Korean dictator Kim Jong Un stunned much of the nation. But … Continued 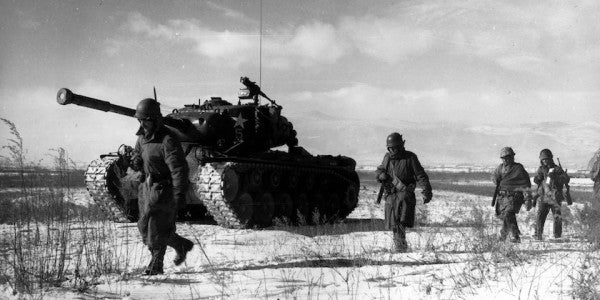 President Trump’s announcement that he would meet with North Korean dictator Kim Jong Un stunned much of the nation. But two Korean War veterans said it was high time for the two leaders to meet.

“It’s certainly better to be talking than shooting,” said retired Army Col. Henry Gole, 84, who served as an enlisted soldier with the 25th Infantry Divisionduring the three-year war that claimed the lives of nearly 37,000 U.S. troops. The war also put the United States and China in direct conflict and brought the world to the brink of nuclear war.

At different stages in the war, the North Koreans, United States and Chinese each appeared to be on the brink of victory, but the conflict eventually ended where it started, resulting in the first U.S. war to end in a stalemate.

Gole said he’s no expert on North Korea, but that Trump’s decision to meet with Kim seems like a good idea with a lot of details that need to be worked out.

“After 60-some-odd years, maybe we could resolve these issues, but it seems to me a very, very tricky proposition to satisfy both sides,” Gole said. “There are many countries contiguous to or in the general area of Korea that have interests and we have to make sure that whatever we do is coordinated with our friends as well as addressing the issues immediately at hand.”

Gole, who served in Special Forces after the Korean War, said he is unsure whether Kim can or will negotiate in good faith when he meets Trump. He also said his wartime experience does not give him any special insight into the latest news about North Korea.

After coming ashore at Inchon, where U.S. forces shifted the momentum of the war and began a drive to end the North Korean regime, Balleza and his brother fought for their lives at the Chosin Reservoir, where the Chinese attacked with 300,000 troops in a bid to annihilate all U.S. and allied forces on the peninsula.

Marines broke out of the Chinese encirclement and conducted a fighting retreat in subzero temperatures while wearing boots that came apart in cold weather. Eventually, the front lines stabilized and the conflict became a slogfest akin to World War I.

“Anything that will avert a war, as far as I’m concerned, is worthwhile,” he said. “I’ve been at my share of battles. I know what it’s like to be in hard combat and if we can avert that, I think it’s a wonderful thing.”

In 2001, Balleza visited South Korea and was proud at how the country had leapt from third-world status during the war to Asia’s economic miracle. North Korea has thousands of artillery pieces that threaten up to 25 million people in the greater Seoul area.

The prospect of Americans being killed in a war against North Korea also haunts Balleza. Although he did not fight in World War II, he often thinks of the U.S. soldiers who were killed before they could reach the beaches at Normandy and in the Pacific.

He said he feels lucky because the beaches had already been secured when he landed at both Inchon and Wonsan.

“I consider myself fortunate that I wasn’t greeted with a whole bunch of bullets coming at me – I had a bunch of them come at me later on,” Balleza said. “I always think about those many, many young men that never got out of the water, that were killed at the water’s edge.”