72 Years Ago, The US Army Blew Up A Giant Swastika In Nazi Germany

On April 22, 1945, a victorious U.S. Army destroyed one of the greatest symbols of Germany’s Nazi regime: a giant … Continued 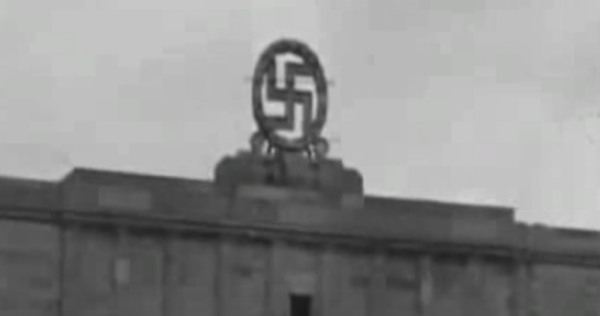 On April 22, 1945, a victorious U.S. Army destroyed one of the greatest symbols of Germany’s Nazi regime: a giant marble swastika that overlooked the Zeppelintribüne, Adolf Hitler’s most powerful pulpit, at the heart of the Nazi party rally grounds.

In 1934, Nazi architect Albert Speer constructed Zeppelinfeld stadium as part of the Nazi party rally grounds southeast of Nuremberg, Germany. Located east of the Great Road, it was built to resemble the Pergamon Altar in Ancient Greece. At the front of the stadium was the famous Zeppelintribüne grandstand, atop it sat that massive swastika.

Just three days prior, the Army’s Third Division marched onto the stadium’s field, where five men were given the Medal of Honor for actions of valor in World War II, and the American flag was draped over the swastika.

It’s hard to overstate the symbolic nature of the demolition. “There is no more hideous spot today than Nuremberg, shrine city of the Nazis,” the New York Times’ Richard H.J. Johnson wrote in a first-hand account of the city’s deliberate destruction by the Allies:

There was not a single building in the center of the town that had not suffered heavy damage either from United States artillery and bazooka shells or from Allied bombings before the final battle. All the ancient, historical monuments and buildings, as well as the later structures put up by the Nazis, are in complete ruins.

That swastika wasn’t the only piece of Nazi symbolism American troops destroyed — there’s even a whole supercut of German surrender, for some strange reason.