What he did that day had never been attempted before, and has never been repeated since. 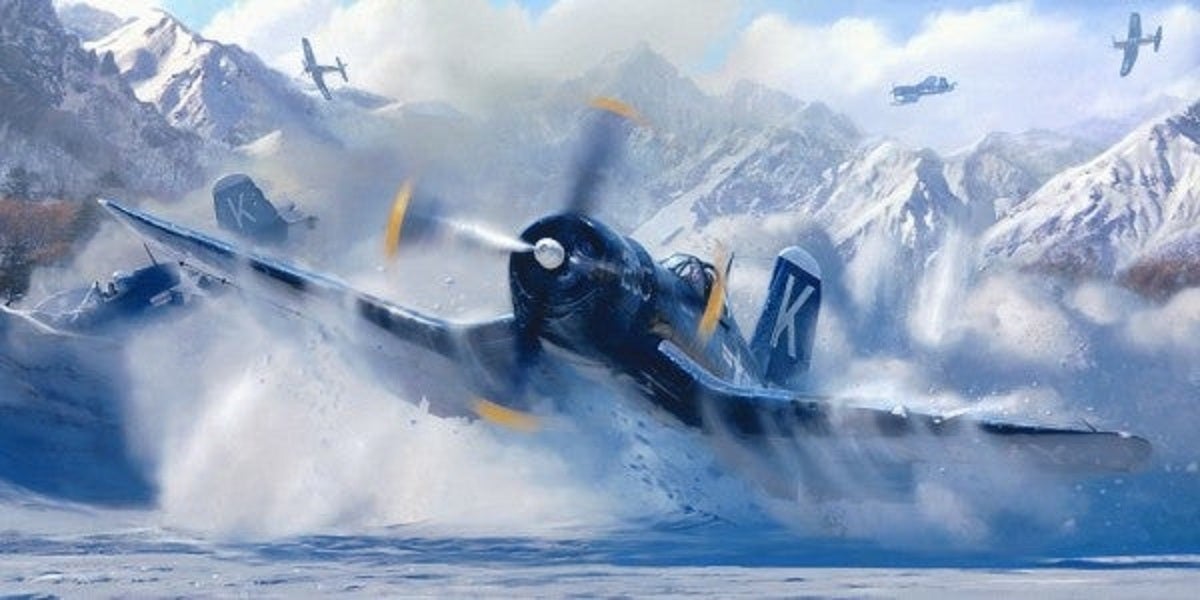 It might seem like an April Fool’s joke: The Navy commissioned its newest destroyer on April 1 and named it after a man who deliberately crash-landed a perfectly good aircraft behind enemy lines. But the man who lent his name to the USS Thomas Hudner had a damn good reason, perhaps the best of reasons.

Editor’s note: This article was originally published on April 11, 2017.

It was Dec. 4, 1950, during the Korean War, and Navy Lt. Thomas Hudner was flying an armed reconnaissance mission in his F4U Corsair over the Chosin Reservoir. The battle raging in the reservoir basin pitted nearly 100,000 Chinese troops against 15,000 United States Marines and soldiers. Cut off and surrounded, the Americans on the ground depended on the support of combat pilots like Hudner and his wingman, Ens. Jesse Brown.

Brown, a seasoned pilot and the Navy’s first African American aviator, was the son of a sharecropper who grew up in a Mississippi shack with no electricity or central heating. Hudner, who is white, was born into an affluent New England family. Their backgrounds were completely different, yet the two men forged a deep bond at a time when the military, and the nation, was deeply divided along racial lines. Theirs was an incredible friendship that would be brutally tested that day.

The pilots were scouting enemy positions when Brown took ground fire, which pierced an oil line.

From the cockpit of his Corsair, Hudner heard Brown calmly announce: “Losing power. My engine is seizing up.”

Too low to bail out, Brown had no choice but to crash-land his plane in a clearing on the side of a snow-covered mountain. The impact crumpled his plane, bending the fuselage 30 degrees. Amid the plumes of snow kicked up in the crash, smoke began rising from the crash site.

As Hudner circled above, he noticed the canopy of the scuttled aircraft was open, and there was Brown, waving to indicate he was still alive. But he didn’t leave the cockpit, even as fire and smoke rose from the aircraft.

What Hudner did not know then — even if he had, it’s unlikely he’d have done anything different — was that Brown was trapped inside the downed plane. When Brown crashed, the aircraft’s twisting and bending pinned his leg down in the cockpit. Miles behind enemy lines, with the nearest rescue helicopter 30 minutes away, Hudner made a decision: He wasn’t going to stay in the air while Brown was trapped on the ground.

“When I realized that Jesse’s airplane may burst into flame before it could get there, I made a decision to make a wheels up landing,” Hudner told the Congressional Medal of Honor Society in an interview, explaining that he was going to “crash close enough to [Brown’s] airplane to get there, pull him out of the cockpit, and wait for the helicopter to come.”

In the moments after Brown crashed, Hudner radioed the remaining Corsairs, saying simply: “I’m going in.” The other pilots didn’t know what he’d meant until he showed them.

Bringing his aircraft around, Hudner deliberately crash-landed on the side of the mountain. It was a daring and selfless decision, but also an incredible feat of airmanship, explains Adam Makos, author of 2015’s “Devotion,” a detailed account of Hudner and Brown’s lives, military service, and friendship. Both pilots’ survival after their crashes spoke highly of their training as carrier pilots, Makos says.

“What Tom did that day had never been attempted before, and has never been repeated since,” Makos told Task & Purpose. “In fact, before Tom made it back to his aircraft carrier, the captain had already wired a message to the fleet that ‘there has been no finer act of unselfish heroism in military history.’ It’s considered by many to be one of the bravest acts in the history of warfare.”

On at least three separate occasions during World War II, pilots landed behind enemy lines to rescue a downed wingman, Makos says. Once, in Romania, a P-38 pilot plucked up his wingman, and the two men had to share the cramped one-person cockpit on the flight to safety. In Germany, a P-51 pilot rescued his wingman in the same fashion, and in the Pacific, a SBD Dive Bomber pulled off the same feat.

But until that day in Korea, nobody had ever crash-landed on purpose, placing himself in an untenable position: on the side of a mountain, in deep snow and sub-zero temperatures, with the nearest ground forces miles away and preparing to withdraw in the opposite direction.

There were only three functioning helicopters at the nearest friendly base, and they had thousands of frostbitten Marines to evacuate.

“When Tom did that, the thought that a helicopter was really going to come and get him, it was more of a wish. Almost a delusion,” Makos says. “That’s not why he did it though. He saw Jesse Brown in need. He saw his friend about to burn to death in the most horrific way.”

As Hudner made his way to Brown’s aircraft and clambered atop the wreckage, his friend and wingman was slipping in and out of consciousness. Hudner could do little on his own — he lacked any tools to free Brown from the plane.

Miraculously, a helicopter was dispatched to aid the two aviators, and it arrived 30 minutes later. But time was running out. Fuel was leaking from the wreckage, and Brown’s health was deteriorating. Marine 1st Lt. Charles Ward made his way from the helicopter to the crash site, but try as they might, he and Hudner couldn’t get Brown free of the wreckage. The fire extinguisher stopped working in the extreme cold, and the axe bounced uselessly off the fuselage, hardly making a dent.

As the sun began to set and temperatures continued to plummet, Hudner was faced with a terrible decision. The helos were not equipped to fly at night. Hudner could either stay with Brown, or he could go back and try to return again in the morning.

“It would have been suicide to stay. Jesse had been wavering in and out of consciousness,” Hudner said in a Congressional Medal of Honor Society interview. “I made the decision to go with Charlie.”

By the time Hudner left, Brown had succumbed to his injuries and the cold. Before he lost consciousness, Brown made a simple request. He wanted Hudner to give a message to his wife: “Just tell Daisy how much I love her.”

After Hudner arrived back on the carrier, it was deemed too dangerous to recover Brown’s body, and on Dec. 7, 1950, seven planes were dispatched to drop napalm on the two downed aircraft.

“Jesse died a warrior’s death, in a funeral pyre,” Hudner said in the Medal of Honor Society interview.

On April 13, 1951, Hudner was presented the Medal of Honor for his actions that day. Hudner kept his promise to Brown — and along with his shipmates, he took up a collection for Jesse’s daughter, who was 2 at the time. The crew raised the equivalent of $24,000 today for her college fund, according to CNN.

Hudner retired from the Navy in 1973, but in 2013, he returned to that same mountain to search for Brown’s plane and attempt to recover his remains. And this year he attended the April commissioning of his namesake Burke-class destroyer. In time, Hudner — now 92 — hopes another vessel will be commissioned bearing Brown’s name, so the two can sail together, he told Navy Times.

More than half a century after President Harry S. Truman integrated the military in 1948, Hudner and Brown’s legacy is evident, explains Makos:

“These two men, Jesse was a pioneer, and Tom was a hero, but together they helped pave the way for the military we have today.”