What Happens When You Fire A 500 Magnum With No Hands?

It’s common knowledge that you should hold a pistol with two hands when firing. That being said, you can still... 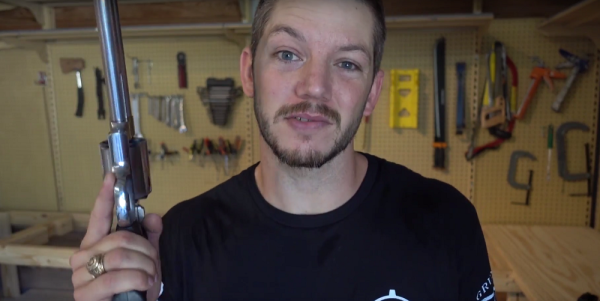 It’s common knowledge that you should hold a pistol with two hands when firing. That being said, you can still do it one-handed, and this has the benefit of making you look cooler, and we all know that being tacti-cool is at least as important as being safe, and accurate.

If fewer hands on your pistol makes you more high speed, then shooting a gun with no hands pretty much makes you Jason Bourne, especially if it’s a .500 Smith & Wesson magnum.

Related: What Does It Take To Actually Penetrate A Block Of Titanium? »

Smith & Wesson’s .500 magnum is one of the largest and most powerful handguns in the world, so you’ll rarely need to fire it more than once, though you probably couldn’t even if you wanted to.

In the video, Carriker builds a wooden frame to hold the gigantic hand cannon upright, but not in place, so the recoil can carry it backward. He attaches a length of cord to the trigger and hides behind a tree, which is smart, because that thing kicks, hard, especially when no one's holding on for dear life.

Don’t believe it? See for yourself.

In addition to running Demolition Ranch, where the host and his guests unload on everything from titanium blocks, to pool balls, Carriker is a veterinarian and also runs Vet Ranch, where he takes in injured animals and nurses them back to health.