5 Perfect Birthday Gifts For The Mad Dog Who Has Everything

Before he was “Mad Dog” and “Chaos,” before he commanded divisions in Baghdad and Fallujah, and before he assumed his … Continued 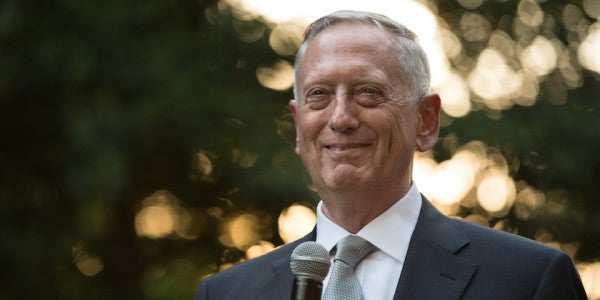 Before he was “Mad Dog” and “Chaos,” before he commanded divisions in Baghdad and Fallujah, and before he assumed his rightful place at the helm of the Pentagon, Secretary of Defense James Norman Mattis was just little Jim from Richland, Washington.

Born Sept. 8, 1950 to what a friend of his once called “hippie-dippie” parents, Mattis skipped the drum circles and marijuana cigarettes and, in 1972, joined the Marine Corps instead. And thank God he did.

Today, the retired four-star turns 67. This is probably news to him. Birthdays are for cake eaters and people with too much time on their hands. And what more can you give a guy who was just handed 3,500 additional troops for the war in Afghanistan?

But in case someone is planning a surprise birthday party for the SecDef, here are a five additional presents we think he’d appreciate.

1. 10,000 more troops. Should come with a card that says, “Dear Jim, these are yours to use whenever and however you want. Happy birthday! Love, Donny.”

2. A war bride. Mattis has fought a lot of war, but he has never known the sensual touch of a woman (that we know of). It’s finally time for the hard-charging general to get married and start churning out little mad dogs — if only for the sake of our country’s future.

3. A television. Mattis didn’t grow up with a TV and apparently he still doesn’t own one. But this won’t be a normal television, because instead of movies and shows it will just play Predator drone live video feeds. This way he’ll always feel at home.

4. A knife-hand sharpener. Of all his Mattisims, the general is probably best known for advising subordinates to “Be polite, be professional, but have a plan to kill everybody you meet.” This is a hard mantra to live by when all you have is your soft, aging hands. So we recommend a useful tool to keep those puppies razor-sharp and always ready.

5. A new nickname. Several months ago, Mattis begged reporters to just call him “Jim,” suggesting the days of Mad Dog and Chaos are over. But that’s OK, because those nicknames are sort of boring at this point anyway. It’s time for an upgrade. What’s the best new nom de guerre for one of the most legendary military men alive? We welcome your suggestions in the comments