"I'm genuinely impressed for once." ​ 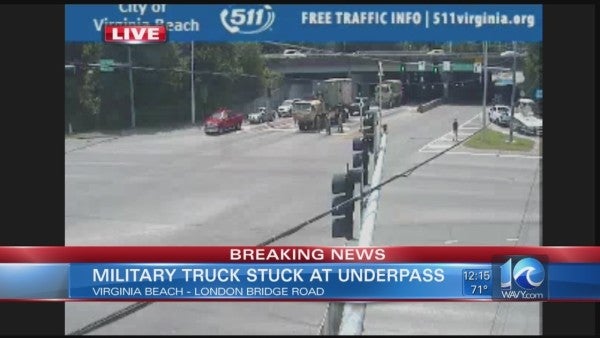 Apparently some people take the displayed height requirements on an overpass as merely a suggestion, which gets you a situation like the one down near Virginia Beach on Monday.

According to the City of Virginia Beach Police Department, an Army truck got stuck in an underpass after (we assume) he or she thought, “Eh, fuck it” upon seeing the height requirement of 13 feet, 8 inches. That, or the driver just had no idea how tall the truck actually was.

It was stuck for about six hours, the police department told Task & Purpose, blocked several lanes of traffic, and halted the convoy, according to NBC news affiliate WAVY.

It wasn't clear what Army unit would be adding “look out for highway overpasses, you idiots” to its next pre-convoy brief.

No one was injured — except for “the seriously injured pride of the driver, the A-driver, the vehicle commander, the convoy commander, the entire military, and every single one of our forefathers,” as Military Times' J.D. Simkins so poetically phrased it.

And understandably so, social media users had a freakin' ball with this.

“Where are all the PFCs?” One person asked. “They aren't pushing it yet?”

“When your the reason for this weeks safety brief,” another person commented on the U.S. Army WTF Moments post.

“Something tells me 'watch this shit' was uttered many times…possibly shortly after someone said 'no you won't.'”

“The 91B in me says calmly assess the situation, but the H8 in me says fucking send it.”

But this comment said it best: “I'm genuinely impressed for once.”

SEE ALSO: 9 of the worst-named military missions and war games in history

WATCH NEXT: The Army Tests LSD on US Service Members