What It’s Like To Be A Marine, According To An Action Figure

When someone asks you why you joined the military — do you ever just want to slap them in the... 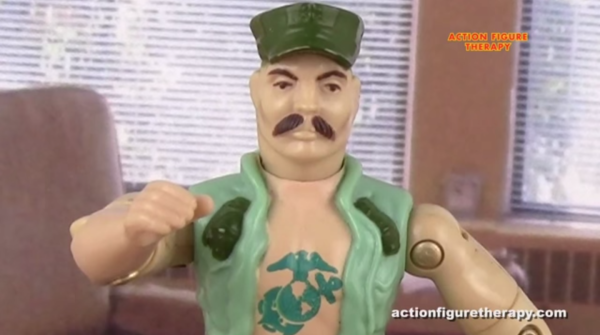 When someone asks you why you joined the military — do you ever just want to slap them in the face? If the answer is no, you’re reading the wrong article. This article lives in a ridiculously motivated fantasy world where the right answer sounds like this:

“Being a Marine is the greatest job in the world, what other occupation turns you into a living breathing 100-foot-tall Jolly Green Giant of death? Flying all over the world at a moment's notice to give scum bags, murderers and terrorists the business? Rain sleet or snow, I’m the mailman of judgement day!”

This and oh, so much more from a video made by the folks with Action Figure Therapy called “Why I Became A Marine.”

The video is vulgar and not at all safe for any respectable work environment and an absolute caricature of military service, delivered by an action figure with an Eagle, Globe, and Anchor tattoo on his chest, and the most out of regulations mustache we’ve ever seen on any Marine, real or figurine.

It’s absurd, except for where he says Marines brush their teeth with napalm and floss them with barbed wire. That part’s true.

If you’re in the mood for something you can only listen to at work with headphones on, then you might want to hear this action figure explain why he became a Marine.