See What Happens When A Poolee Asks A Marine Drill Instructor, ‘What’s Up?’

There is a right way and a wrong way to talk to a Marine Corps drill instructor. Then there’s the … Continued 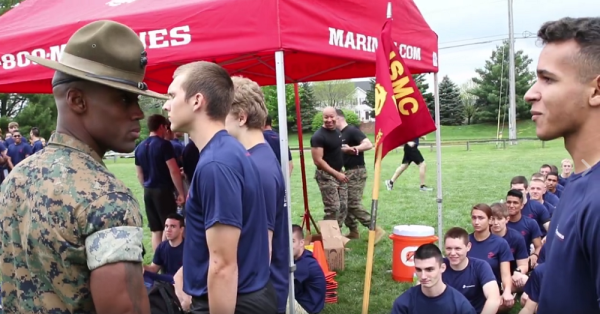 There is a right way and a wrong way to talk to a Marine Corps drill instructor. Then there’s the really wrong way. Like, “what the hell are you thinking,” kind of wrong.

A prospective Marine recruit found that out the hard way.

In the video, one of the poolees runs up to Sgt. Jason Jarmond, a drill instructor stationed at Marine Corps Recruiting Depot Parris Island, South Carolina, and immediately makes a mistake.

If you’ve served in the Corps, you know what’s going to happen next.

Jarmond stands stock still for a moment, then points into the distance and says one word: “Run.”

In the background you can see two Marines laughing to themselves as Jarmond chases the poolee across the field, screaming the entire way as other Marines laugh on the sidelines. It’s probably a good thing that the poolee made that mistake while he was still a civilian, and not a Marine recruit.

The video was shot and edited by Sgt. Anthony Kirby, a public affairs Marine assigned to the recruiting station in Frederick.