How To Survive The First 4 Weeks Of Marine Boot Camp

“Get off my bus right now!” This is how Marine Corps recruit training, or boot camp, begins. Some guy you’ve... 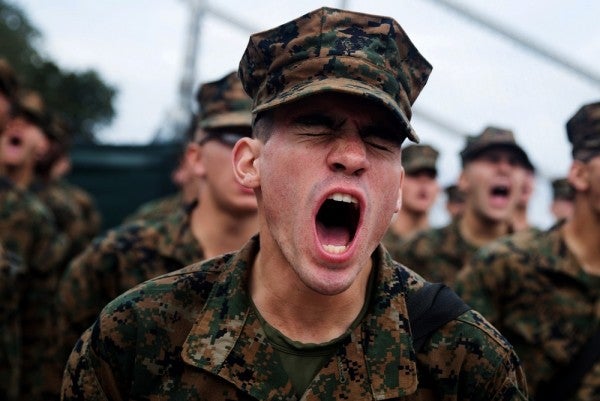 “Get off my bus right now!”

This is how Marine Corps recruit training, or boot camp, begins. Some guy you’ve never met, wearing a wide-brimmed hat, screams at you to get off the bus. You file out and stand on the yellow footprints, a right of passage for all future Marines, and a reminder that every one of the Corps’ heroes and legends stood where you’re standing.

The first 72 hours are called “receiving,” and they’re a mild introduction to what’s ahead. Those first three days consist of a flurry of knife-hands, screaming, rough buzzcuts, gear issue, and general in-processing and paperwork.

If you’re tired or having second thoughts by then, you’re in trouble. The real work hasn’t even started.

The 27-year-old Marine enlisted when he was 18, and six years later returned to Parris Island in July 2013 as a drill instructor assigned to the same company where he was a recruit.

“Six years ago, I was in their shoes on that same black line they’re now standing on,” says Phillips, who has now trained eight platoons of Marines. A platoon of recruits can range in size from 50 to 100, and is overseen by three to five drill instructors, depending on the platoon’s size.

Drill instructors serve a variety of roles. There’s the enforcer, often called a “kill hat;” an experienced drill instructor, called a “J-hat” or a “heavy,” who has the most interaction with recruits; and a senior drill instructor, who serves as a stern paternal figure. Phillips served in each of these roles throughout his seven-and-a-half cycles training recruits.

Recruit training lasts 12 weeks and is broken into three phases.

In first phase, civilians learn how to be Marine recruits, and later, Marines.

First phase begins during receiving, and afterward, recruits are assigned to their platoons and introduced to their drill instructors.

“First phase is that indoctrination,” says Phillips. “They’re not recruits yet, you’re teaching them how to be recruits. It’s a whole new lifestyle.”

Recruits relearn everything they thought they knew: how to dress, walk, talk, eat, and even how to shower and properly clean themselves. Throughout boot camp, recruits must refer to themselves in the third person. The words “I, you, and we,” are replaced by “this recruit,” “that recruit,” and “these recruits.”

“We have to teach them a new way to talk, a new way to eat, brush their teeth, shave their face, everybody comes from different backgrounds growing up” says Phillips, who explains that first phase “evens the playground for everyone, it strips them down and puts everyone on that even playing field.”

First phase also involves a lot of lectures, conducted by a drill instructor who lays out the Corps’ history from its founding in 1775 to now.

“The knowledge is such a key part,” says Phillips. “I’ve had kids tell me they didn’t expect there’d be so much classroom time. It’s not 'Call of Duty,' kids are like, ‘Man this is completely different from what I’ve expected. I haven't shot a weapon, I’ve just carried it around.’”

“Drill is used in first phase to get that discipline,” says Phillips. “Just standing at attention and not moving for 20 or 30 minutes, that’s hard for a lot of those 18 or 19-year-old kids that are used to just doing whatever they want to do. Drill is that unit cohesion, that teamwork, that sense that if I mess up, those guys on my left or right are going to suffer.”

If you come in with the wrong mindset, it will cost you.

“The thing that’s going to get you spotlighted during first phase is attitude,” says Phillips. “[Recruits] should know coming here that it’s never personal. The Marine Corps is a business. It’s a fighting force.”

If recruits do mess up, and they will, then they “suffer,” usually in the form of incentivized training or “IT,” which involves lots of push-ups, running in place, burpees in the sun, and planks.

“They watch the videos and hear the yelling and screaming and think ‘I won’t break,’ then they get here and it’s time to be a man.”

This phase of training culminates in two events: initial drill and swim qualification.

Initial drill involves a detailed inspection where recruits’ uniforms and weapons are checked, and they’re quizzed on what they’ve learned in those first few weeks.

The final hurdle in phase one is swim qualification, and if a recruit can’t pass that, then he or she has no chance of moving forward.

“Some kids have never been in the pool and I would tell them to be mentally prepared for that,” says Phillips.

In addition to being mentally prepared, prospective Marines who can’t swim might want to think about taking lessons before they sign on the dotted line.

“If you can’t swim, there is nothing they can do, you are not going to move on to that next phase,” says Phillips.

According to Phillips, no matter how tough the drill instructors are, everything they do is for a reason.

Consider the knife-hands that recruits are told to point and gesture with. There’s a reason for that. A knife-hand is when your fingers are outstretched and together, like a blade, your wrist is straight, with your thumb pressed down. That’s also the position your hand should be in when you salute.

It’s not a coincidence, says Phillips.

“They don’t even know the reason, but they’re going to reap the benefits of that reason.”

After phase one, recruits move on to the second phase of training where they are taught how to shoot, as they build off what they’ve learned in the first four weeks.