"It is something I'm very proud of, when I look across the room and I see people who look like me." 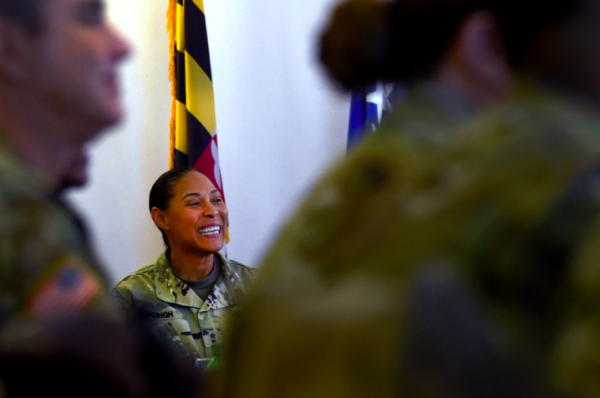 “The company commander at that time … he was the only one that knew,” Singh told reporters at a roundtable event on March 28th, about her experience after joining a new company years ago. “And because I went into a male environment, I didn't want anybody else to know. … If it wasn't for me having to wear a dress uniform, which I couldn't fit, they probably wouldn't have known until I was like seven or eight months because I just kept buying a bigger jacket. And just to tell you how it was during those days, they did not want me in the motor pool because I was pregnant. I went, 'Really?' … 'Well, you're pregnant.' 'Okay, well, I don't have leprosy.'”

Singh — who describes herself as a “collector of fine things” — is quick to point out that these women didn't get these positions by just being women. She said she realized about a year and a half ago that the trajectories of each of the women's careers, along with “moves and retirements, and…national-level assignments,” were aligning just right to allow for the all-female command team.

“It was really about timing and it's about having the leaders that have the right skill-set,” Singh said. “I don't think really in my whole career i've ever seen it that it's lined up this perfect, so somebody was looking out for me.

Birkhead echoed that, saying while part of it is about “stars aligning,” the rest of it about very deliberate decisions, and having support from “the person who has your voice in the room” when you're not there.

“It wasn't something that drove me every single day. 'Oh my God what do my male counterparts think of me?'” she said. “I grew up with a lot of males, and so the only thing that I kept thinking is 'Well, if they can run that fast, I can run faster. If they can shoot that way, I can shoot faster.'”

The goal shouldn't be to simply have an all-female team, Singh said, but to “have a competent leadership team that is diverse.” But being an all-female team can come with its advantages — as well as its challenges.

“For this particular team when someone is sick at home, to include my husband, we get the phone calls,” Singh said. “We're having to deal with the balancing of our meetings, and being at work, and then oh by the way we have to go home and take care of home. And I will tell you, I get a lot of young kids that ask me, 'Gen. Singh, do you cook?' You’redarn right I cook! … We just have to be real about it, that doesn't make us any less valuable because we have other things to do.”

As for Vogel, this isn't her first time being on an all-female team, but that if there's “anything gained by having this leadership team, it's people looking up and saying 'Huh, who knew?'”

“It is something I'm very proud of,” Vogel said.”When I look across the room and I see people who look like me.”