Hours after President Donald Trump laid out the government's new approach to the 16-year-old U.S. military campaign in Afghanistan on... 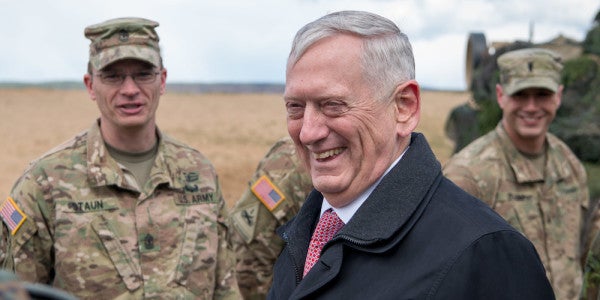 Hours after President Donald Trump laid out the government's new approach to the 16-year-old U.S. military campaign in Afghanistan on Aug. 21, Secretary of Defense James Mattis arrived in Baghdad to reassure Iraqi political leaders that yes, the fight against ISIS is going swimmingly.

“ISIS is on the run,” Mattis said following an Aug. 22 confab with Iraqi Prime Minister Haider al-Abadi, according to the Associated Press. “They have been shown to be unable to stand up to our team in combat … ISIS's days are certainly numbered, but it's not over yet and it's not going to be over anytime soon.”

But the next day, Mattis delivered a more casual pep-talk to the Americans service members stationed in Jordan who are actually fighting on the front lines of Operation Inherent Resolve in Iraq and Syria. His remarks, recorded by a service member and posted to Facebook by the mega-popular U.S. Army W.T.F! Moments page, are classic Chaos: Polite and respectful but guaranteed to get combat troops fired up and ready to go.

The secretary of defense opened with his usual dry humor: “My name's Mattis … I work at the Department of Defense, obviously.” But once he had the assembled troops' attention, Mattis dove into the serious stuff:

You get promoted after awhile and you're so remote that you get out touch with those of you that matter. But believe me, I know you're far from home, every one of ya, and I know you could all be going to college, you young people, or you could be back on the block …

The only way this great big experiment you and I call America is going to survive is we got tough hombres like you. Some of you are too young, Cpl. Walton, but on 9/11 we were up against an enemy that thought if he could hurt us he could scare us, but we don't fricken scare. That's the bottom line.

That “tough hombres” in particular line stands out, if only because it's the same term that Trump used to refer to the drug cartels wreaking havoc in Mexico during the earliest days of his administration. We'll chalk it up to coincidence.