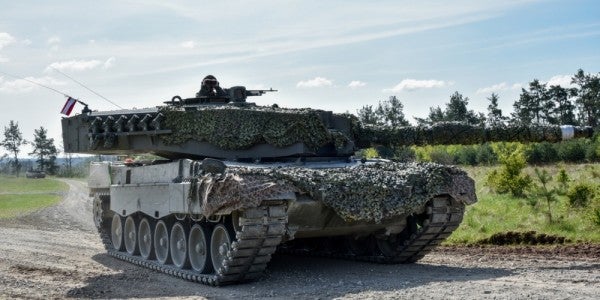 For all of its #KnowYourMil outreach to the public, the U.S. military desperately needs to take a refresher course on tanks and artillery.

In November, the Defense Department’s official Twitter account shared a picture of what they said was an M109 Paladin. Nope. It was a M1128 Stryker Mobile Gun System

Then, in March, the DoD tweeted a picture of “tanks” being offloaded a ship – except they really were Paladins this time.

And now, Army Chief of Staff Gen. James McConville recently tweeted a video love letter to the M1 Abrams tank along with the caption, “What type of Soldier operates an M1 Abrams Main Battle Tank?”

One problem: The tank at the very beginning of the video is not an M1 Abrams. It looks more like a Leopard variant used by the German army and other foreign militaries. (A 1986 German military video showed off the Leopard 2’s gun stabilization system by attaching a glass mug full of beer to the cannon and then driving the tank – none of the beer spilled.)

Because people enjoy being told when they make mistakes, Task & Purpose dutifully passed along the pertinent information to McConville’s spokesman.

The crisis was soon resolved.

“Thanks to feedback received from online followers, we removed a video highlighting the duties of an Armor Crewmember that mistakenly included a short clip of a Leopard Tank along with footage of M1 Abrams Tanks,” said Lt. Col. Curtis Kellogg. “Feedback like this improves the quality of our social media content.”

Rest assured, we at Task & Purpose are always ready to provide constructive feedback to our friends handling the Defense Department’s social media accounts.