Here's a collection of military stock photos that were so wonderfully terrible I actually paid money so we could use them in this story. 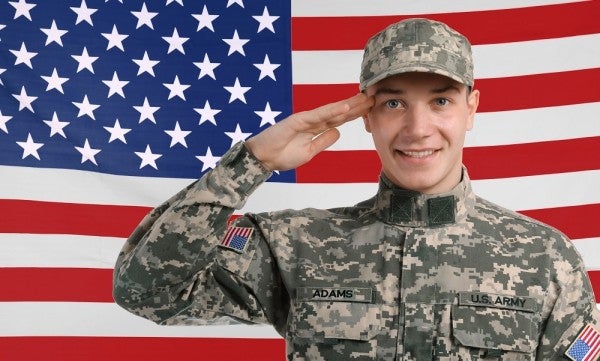 Let's take a moment to talk about military stock photos. As a veteran or service member, you've seen them in your news feed, on social media, or as unwelcome pop-up ads or interruptions to your regularly scheduled binge-watching. No, this won't be a holier than thou rant about how some model or company is disprect'n our troops by not getting uniforms right.

In fact, this will be the opposite.

I want to discuss how military stock photos are so outrageously bad, they're actually kind of great.

Yes, you read that correctly. I, a veteran, love terrible military stock photos, and here's why: They aren't just bad, they're consistently bad in the same delightfully regrettable ways.

It's almost as if the models have their own rules which they follow to the letter, except they're the exact opposite of military regs. Instead of tight fades and clean shaves, you're obligated to sport a shaggy 'do or a giant viking beard. Neat and orderly uniforms are replaced with loose-fitting duds and adorned with a hodgepodge of flags, badges, and whatever the hell else was lying around at the time.

Oh, and let's not forget the collars, but more on that in a moment.

So, here's a collection of military stock photos that were so wonderfully terrible I actually paid money so we could use them in this story.

I'm going to breeze past the dual American flags, the missing nametape, and the f'd up cover and go straight to the collar on this one. It's almost like there's a uniform of the day for terrible stock images and it involves having the blouse buttoned up or cinched as high as it'll go. I'm not joking: I genuinely think there's a conspiracy afoot to inundate the masses with photos of soldiers with their collar up. See what I mean?

And there's more, like this one, and this one, and shit, there's even a gallery of futuristic soldiers and they're all rocking the same collar. Oh, and on that note…

Even the fake Army gets better shit than the fake Marine Corps.

Even in future stock photo world the collars are still up. Shutterstock

It's worth noting that there were no photos of Marines using VR devices as part of some pseudo-futuristic training program. That's probably because even in the stock photo world they know that the faux Marine Corps wouldn't get the nice gear until years after the fake Army.

$40 says the guy on the right has a Spartan helmet tattoo. Shutterstock

Check out Delta Force Ranger SEAL Team ZZ Top over here. Clearly they're enjoying a well-deserved light beer (don't worry, it's domestic) after triumphing over both the forces of evil and grooming standards. You know how I know these guys operate? Beards. That's how I know, that and the mishmash of tactical swag that was probably pilfered from a military surplus store during a clearance sale.

That OEF Wifi is so good.

You know how I know this is a stock photo? Those tents are in way too good of shape to be real. Shutterstock

“You know what I miss about Afghanistan, that sweet sweet WiFi that I could use to live stream Skype calls with my family back home on my tablet that absolutely was not pulverized when my seabag was rolling around the belly of a C-130,” said no one ever.

There's a Pvt. Buster Bluth in every unit. Shutterstock

Pvt. Buster Bluth reporting as ordered! Not only is he going all out on star spangled patches, he's doing it while standing in front of the American flag. So much freedom! Which, now that I think about it is kind of a time-honored tradition in the military stock photo world. Here's what popped up for “similar images” on Shutterstock:

Thank you for your service military stock photo models. Screenshot of Shutterstock

The totally accidental, but 100% accurate stock photo of a recruiter.

“Yeah, you can totally change your mind if you don't like basic, absolutely. Just sign here…” Shutterstock

Join the Army, bruh, it's awesome. I just work out all day long. I get to go home whenever I want. And no, this cup's totally not full of whiskey and Creatine powder to drown my sorrows as I bulk up. Life is great! I'm definitely not losing my mind as I try to meet these outrageous quotas, and no, I certainly haven't “checked out.” What would give you that idea?

Okay, so you scored a 31 on the ASVAB… hmm, how about a contract for 92S, that's pretty much Special Forces. You'll be a war hero! So, how about we sign you up for a six year contract? You totally won't regret that decision, trust me. Just sign right here…

WATCH NEXT: In Praise Of The Stock Photo Hero