R. Lee Ermey will always be remembered for his ability to cut loose with a string of profanity that bordered on the poetic. 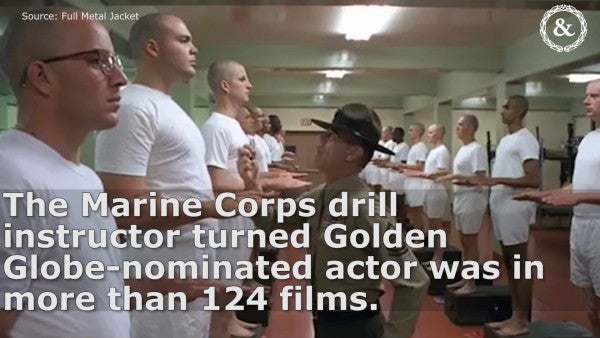 R. Lee Ermey was laid to rest at Arlington National Cemetery on Friday.

A Vietnam War veteran and former Marine drill instructor, Ermey leveraged his military experience to pursue a career as an actor and technical adviser, who racked up more than 60 film and television credits, while still making time to support active duty service members deployed overseas.

Though his onscreen roles included a few “kid friendly” performances like his green army man, Sarge, in Toy Story, it was Ermey's knack for cutting loose with a string of profanity that bordered on poetic that so perfectly captured the image of the hard-as-nails Marine Corps drill instructor. He had a unique ability to be both hilarious and intimidating, and it's one that will be sorely missed and remembered.

Perhaps one of the most iconic boot camp scenes of all time, nearly every sound, syllable and word that came out of his mouth during the first half of Full Metal Jacket is a gem, which is pretty high praise, not just of Ermey's performance, but because he also wrote about half of his lines, notes Rolling Stone magazine. Here's just a snippet of Gunnery Sgt. Hartman's welcome aboard brief:

“If you ladies leave my island, if you survive recruit training, you will be a weapon. You will be a minister of death praying for war. But until that that day, you are pukes. You are the lowest form of life on Earth. You are not even human fucking beings. You are nothing but unorganized grab-ass-tic pieces of amphibian shit!”

Also from Full Metal Jacket, if you've stepped on the yellow footprints, you'll likely recall at least one drill instructor doing their best to mimic the legendary actor's colorful ass chewings, though none will ever be quite as good as this one:

“You little scumbag! I got your name! I got your ass! You will not laugh! You will not cry! You will learn by the numbers! I will teach you! Now get up! Get on your feet! You had best unfuck yourself, or I will unscrew your head and shit down your neck!”

In a 2010 advertisement for Geico, Ermey plays a therapist who gives some sage advice to his client.

“You know what makes me sad? You do! Maybe we should chug on over to namby-pamby land, where maybe we can find some self confidence for you, ya jackwagon!” Ermey says in the ad spot, before flinging a box of tissues at his client. Unorthodox, sure. Funny as hell? Also, yes.

Though Ermey's run as Geico's drill-sergeant-therapist was short-lived, allegedly owing to him being let go from the job after his public criticism of the Obama administration, it's possible that he may may have missed his calling in life.

During a History Channel special in 2001, Ermey discussed his time training Marine Corps recruits during the height of the Vietnam War. In the interview he shed light on a fundamental truth about Marine Corps recruit training: Your drill instructors are pretty much rage-filled stand-up comics.

“I'm a firm believer that the greatest instructors in the Marine Corps today and of yesteryear have always been just damn near stand-up comedians,” he said in the segment.

And there's a lot of truth to this, just think about all the times you were told to do something totally bizarre, like hop across the squad bay saying “ribbit ribbit” because you decided to play around with the green cammie paint and the DI thought you looked like a frog. No? Okay, me either…

Another observation Ermey made during that History Channel interview is that no matter what, drill instructors will find a way to motivate a nasty recruit to complete whatever task they've set before him or her.

“I could have a private who can do nine pull-ups and damn it, when I'm through talking to him, he can do 12. Why? Because I've intimidated this private so severely that I've convinced him that he can do 12 or he's going to die. That's why.”