The United States Navy is recalling some its most seasoned leaders in time for the Holiday season to train up its green pilots, and no, we're not talking about Maverick. 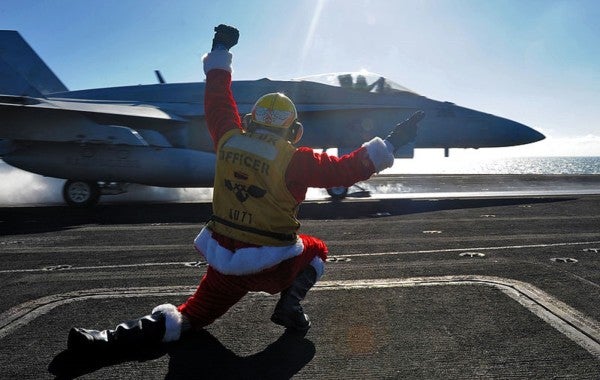 The United States Navy is recalling some its most seasoned leaders in time for the holiday season to train up its green pilots, and no, we're not talking about Peter 'Maverick' Mitchell.

On Tuesday, the official Facebook page for the Nimitz-class carrier USS George Washington shared a holiday gag post reporting that the service “issued orders today to Adm. S. Claus, recalling him to active duty, with a report date of Dec. 24, 2019.”

Claus is listed as a reservist — go figure, since he's off work 11 months out of the year — with 1,742 years of service, and is a naval aviator who specializes in logistics and the “vertical delivery of high-value items.”

He is also flight deck qualified, and is apparently a public affairs officer, which makes me think his “naughty or nice list” is really just an awards press kit and a copy of this month's police blotter.

As was Ensign Rudolph, who appears to have failed his carrier qualification training three times.

Though the individual services, and the Department of Defense, at large, have taken heat for social media faux pas in the past, (some quite recently), we're going to chock this one up as an unmitigated win.