How The Military Decides Who’s Built For Its Toughest Units

Editor’s Note: This is the first installment of a Task & Purpose exclusive that delivers a behind-the-scenes look at how... 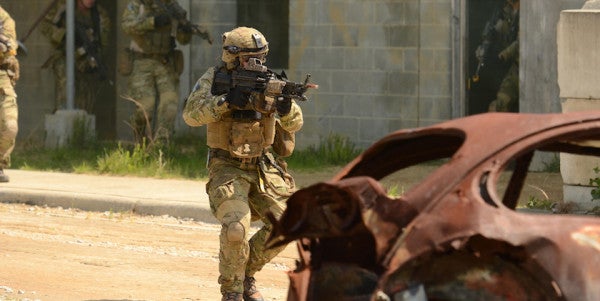 Editor’s Note: This is the first installment of a Task & Purpose exclusive that delivers a behind-the-scenes look at how elite military units assess and select their members. This first article focuses on why special operations forces need to run selections.

The assessment and selection of special operators is arguably the most mythical training available in the United States military. Rumors fly around the barracks about how hard it is or what percentage will actually graduate. There is always that guy whose uncle was a DeltaNinjaSeal in Desert Storm who told him that, “the final test is a two-way live fire where the only standard is … survival!” And of course, there is never a shortage of people who believe that.

Ridiculous tall tales aside, anyone who attempts these harrowing courses will gain the respect of his or her peers. Those who actually make it become member to special units who are revered in both books and movies, known for seemingly super-human deeds in pursuit of our nation’s most dangerous missions. But for the majority of service members, simply being trained in their job specialty is all that is required of them to be assigned to a normal unit. So why do these elite units have an additional selection process?

The heralded legions that count themselves member to the U.S. Special Operations Command consider people to be their most important asset. No rifle or night-vision device can make up for the intelligence, physical conditioning, and intestinal fortitude that a carefully assessed and well-selected operator brings to the table. Finding the right person is of paramount importance, as these same men and women will go on to execute the sharp end of American foreign policy in small teams with little supervision in the most dangerous and austere environments on Earth.

However, each special operations unit has different responsibilities, and, therefore, must select the right person for their particular mission. What makes a good Ranger doesn’t necessarily make a good Special Forces NCO; and what makes a bad SEAL might actually make for a good Raider in the Marine Corps. It’s for this reason that the cadre for these selection courses are always veterans of the unit they select for. Only they know exactly what kind of mentality and skills are needed.

Because of each unit needing a different type of person, each selection must be structured differently in order to highlight the strengths and weaknesses that matter to the unit. For example, Special Forces Assessment and Selection, or SFAS, is attended by both enlisted and officer ranks and is three weeks long, focusing on individual land navigation and long team movements with little to no sleep. The Navy’s Basic Underwater Demolition/SEAL, commonly referred to as BUD/S, while still attended by both officers and enlisted, is 24 weeks long and places more importance on physical standards that steadily increase with an emphasis on being comfortable in the water. Rangers on the other hand, have senior NCOs and officers attend a different selection than the lower enlisted. Both selections focus on different attributes in their candidates, but they all must meet the same Ranger standards.

Of course, there are commonalities across the board for all selections, such as needing a high level of physical fitness. Because special operations are often physically demanding, a selection course must take this into account. Candidates are routinely subjected to hours of physical exercise with the goal of weeding out the physically and mentally weak while simultaneously showing just how far the body can go under extreme duress. Selections are a feat of endurance; if you don’t show up prepared you will be found out in short order.

What many misunderstand during their preparation is that it’s not all about the published minimum physical standards. You need to meet (and exceed) tests like being able to swim two miles in open ocean in under 70 minutes or run five miles in under 40 minutes, but the real test is in the daily “smoke” sessions. These can last for hours, even through an entire night. They include standard fare like push-ups, flutter kicks, and lunges. But, they also will usually include lesser-known forms of punishment like doing jumping jacks while staying in a squat position, otherwise known as “the little man in the woods.” With the cadre’s verbal encouragement for candidates to quit on top of all of that, it’s enough to make all but the most motivated drop out.

A Sailor participating in First Phase Basic Underwater Demolition/SEAL (BUD/S) training recovers during a lunch break. The previous week this Sailor successfully completed “Hell Week,” a five and half day portion of First Phase training where students are only allowed a total of four hours of sleep.U.S. Navy photo by Petty Officer 2nd Class Abe McNatt

Regardless of the selection course, every candidate wants to make the cut, and every instructor wants to find the right person for the job. For most candidates, those two goals are at odds with each other. Elite units would not be very elite if they took every person who tried out. The vast majority who throw their hat in the ring will never see graduation day.

As the former Green Beret Barry Sadler once sang, “Silver wings upon their chest, these are men, America's best. One hundred men will test today, but only three win the Green Beret.”