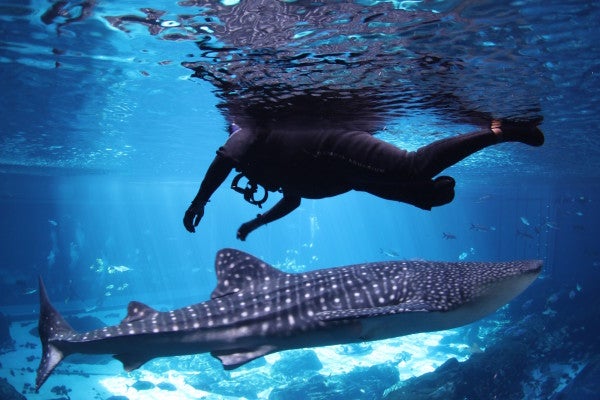 As part of the aquarium’s veteran immersion program, more than 1,300 wounded and injured service members, veterans, and their families have swam alongside a host of sea life, ranging from manta rays to the facility’s four whale sharks.

The program, which is free for veterans, brings in certified handicapped diving instructors and recreation therapists to teach participants how to scuba dive as part of a therapy regimen. All of the patients who enter into the aquarium’s immersion program have come through other health care resources, the aquarium’s assistant manager of donor relations, Sarah Lavine, told Task & Purpose in an interview.

The aquarium offers an immersion program to the public, but in 2008 it opened the program to wounded veterans for the first time and grew in size and scale from there with eight participants diving at a time during two-hour sessions in the water.

“It was a natural outgrowth of our immersion program for the public,” said Susan Oglesby, who first came to aquarium in 2006 as a volunteer cleaning the facility’s 185 tons of acrylic windows, and is now the program’s lead instructor and diver. “We invited injured military to come. The disabilities ranged from very obvious ones: missing limbs, spinal cord injuries, to those that are not so obvious, like brain injuries, , and emotional scarring.”

For Oglesby, who is a certified therapeutic recreational specialist, the program is about more than just the enjoyment participants get while in the water, it’s about creating new positive memories they can turn to in times of need.

“From a therapeutic aspect, we try to position our program in support of the goals of existing rehab and reintegration programs,” Oglesby said. “We’re not setting the goals for any of them, we’re just offering the opportunity to experience it and make of it what you will.”

The most rewarding part of the program for Oglesby is seeing the change that occurs once the participants get in the water.

“They’re like ‘Wow. Wow.’ The aspect is totally different,” said Oglesby, who spoke with Task & Purpose while her team was working with a group of wounded soldiers from Fort Benning, Georgia.

“When you take them outside of their comfort zone and drop them into the water, they’re not thinking, ‘Is that thing over there an IED?’ You don’t think about that, because there’s a whale shark the size of a small school bus swimming underneath you,” added Oglesby. “There’s not room for any of that other stuff you were thinking about before. It’s just bigger than life.”

Watch a video of the Georgia Aquarium’s veteran immersion program below.