You know you’ve got a pretty sweet gig when the morning’s training brief starts out with: “Today, what we’re out... 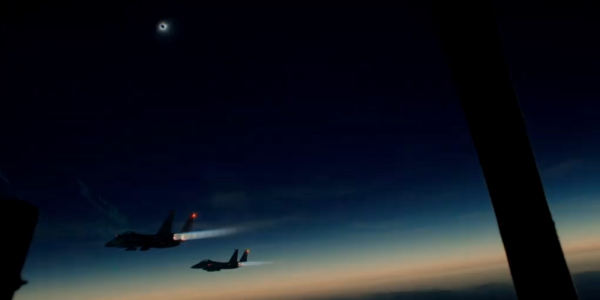 You know you’ve got a pretty sweet gig when the morning’s training brief starts out with: “Today, what we’re out there to do, is intercept the eclipse.” In a recent National Geographic video, pilots with the 366th Fighter Wing at Idaho’s Mountain Home Air Force Base did exactly that.

Three F-15s spent three minutes in the moon’s shadow during a solar eclipse.

To help explain why this counts as training and not just a kickass waste of a work day, actor Will Smith was brought in to break down the video; “luckily, my dad was in the Air Force, so I can do that,” he quips in the viral clip.

“These guys are going to try something they’ve never done before,” Smith says in the clip:

Something that shows how hard it is to go from one planet to another. Everything in our galaxy is moving. During an eclipse, when the moon slides across the sun, its shadow speeds across the earth at 1,700 hundred miles per hour. But it’s easy to forget that we’re moving, too. Our planet spins at 1,000 miles per hour. To stay in the moon’s shadow, the planes have to fly faster than earth spins.

So that’s what they do. Once the sun is fully eclipsed by the moon, the pilots cue their afterburners and race to stay in its shadow for a full three minutes, which one of the pilots likens to “the ultimate intercept. Chasing the fastest object that we could chase. If we can do this, we can intercept anything.”