A day after moving into military housing, a family found a roach on their child’s feeding tube. Then it got worse 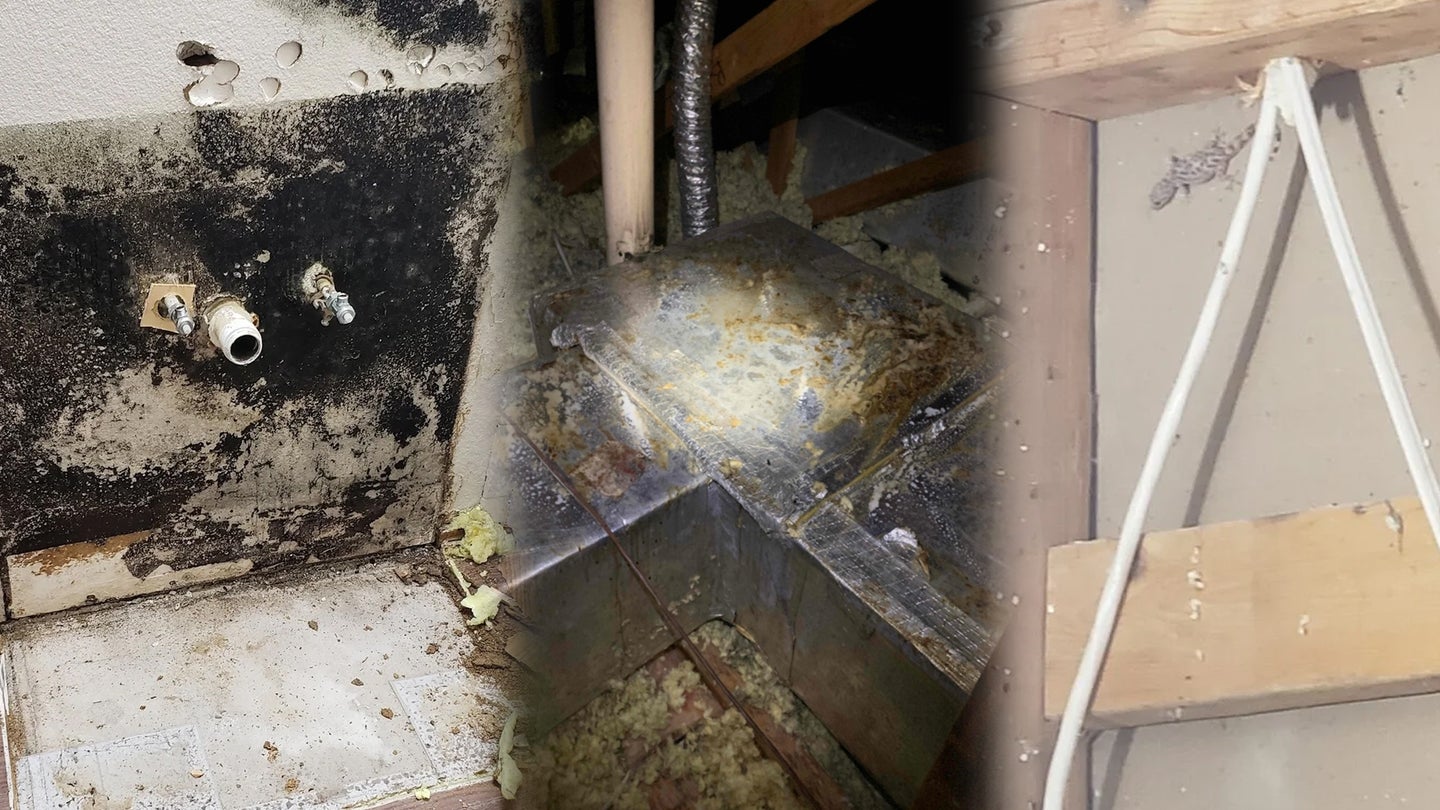 Air Force Staff Sgt. Jonn Roellchen and his wife Roxanne were in their new home for less than 24 hours when they saw the roaches.

It was June 2019, and they’d just moved into their home on Lackland Air Force Base in San Antonio, Texas. Just hours before, they’d done a walk-through inspection and pointed out what looked like water damage, which the housing office said they’d address the next day.

But that night they saw two different kinds of roaches in the house, and the following day, Roxanne saw a roach on their four-year-old son’s feeding tube.

The Roellchens recently joined nine other military families living on bases in Texas including the Fort Bliss Army post and the Lackland and Sheppard Air Force bases in a lawsuit against their privatized housing provider, Balfour Beatty Communities, and its associated companies. The lawsuit alleges one instance after another of “squalid conditions,” plumbing issues, insect and rodent infestations that went ignored, asbestos, mold, and a housing provider that turned a blind eye to their complaints.

The lawsuit says the families “had to rely” on the housing providers to fix the problems they were raising, and after each repair they “reasonably believed” their problems had been addressed. But ultimately, they found “that the landlord companies’ so-called ‘repairs’ were nothing but band-aid measures.”

A Balfour Beatty Communities spokesperson said on Friday that providing “safe and habitable housing for our residents is our top priority,” and that they are “are aware of the complaint, which we believe is entirely without merit, and intend to defend ourselves vigorously.”

“We take reports of mold, pests and other potential hazards very seriously, and we urge our residents to notify us immediately if they have an issue so we can resolve the problem as quickly as possible … We are committed to the continuous improvement of our military housing, and are laser-focused on ensuring we provide the highest quality living experience,” the spokesperson said.

Balfour Beatty — which runs a military portfolio of thousands of homes across 55 Army, Navy, and Air Force installations — is one of several privatized housing providers that have been criticized by Congress for failing military families and leaving them in unacceptable housing conditions. The company was put on notice last year after rampant issues were identified at Tinker Air Force Base in Oklahoma that were not fixed in a timely manner.

John Henderson, the Assistant Secretary of the Air Force for Installations, Environment and Energy at the time, wrote to Balfour Beatty saying the issues they found at Tinker “raise concerns with serious life, health, and safety issues” and joined “a growing list of serious construction, maintenance, repair, management, and oversight performance failures across BBC’s portfolio of Air Force housing projects.”

Staff Sgt. Roellchen and his family are well aware of that.

A Reuters report on privatized housing first highlighted the Roellchen’s story two years ago, but they have continued to have difficulties with Balfour Beatty.

The nightmare with their first home in 2019 was short-lived; Staff Sgt. Roellchen said a contractor came out to address what they saw as water damage in the bathroom and found extensive black mold, roaches, and small gecko lizards in the wall.

They were quickly moved out of that home — though their belongings remained for over a month — and “were forced to bounce around between temporary housing … and hotel rooms,” according to the lawsuit, before they were moved into a much smaller house than what their family of seven needed. The Roellchens were moved into a five-bedroom home in 2020 and are still there today.

Although they’d hoped for a fresh start, this home had many of the same issues as the first one.

“Since we’ve been in this five-bedroom house, we’ve identified four different species of roaches,” Staff Sgt. Roellchen told Task & Purposeon Friday, adding that they also found unsealed vents that allowed rodents inside the house and mold, which the housing office painted over.

The other issues explained in the new lawsuit against Balfour Beatty were no better. One family at Fort Bliss said they experienced toxic mold, gas leaks, and “excessive sand invasion from faulty window and door seals.” Another family said they began suffering from health issues within months of moving into their home at Sheppard Air Force Base, developing asthma and migraines. James Banner, the father of the family, had such intense migraine he was eventually discharged from the military, the lawsuit says.

Another family at Fort Bliss said their home had toxic mold, insect infestations, water leaks and burst pipes throughout the home.

“The most recent burst pipe was a hot water pipe that ruptured in the concrete foundation in the children’s bedroom in the middle of the night,” the lawsuit says. “And woke the children by burning them with [scalding] hot water.”

News of the lawsuit comes after two privatized housing employees pleaded guilty to major fraud against the U.S. Air Force — one of which worked at Lackland, the same installation where the Rochellens live. The Department of Justice said in a press release that the two employees “conspired to manipulate and falsify” maintenance reports, which are used to determine financial bonuses for the companies overseeing privatized housing at the installations.

Roellchen, who is preparing to move his family to Nellis Air Force Base next month, said those same practices are still being used at Lackland.

“They’re still doing the same things today that they’ve got people in jail for. The issues with the work orders that they were under federal investigation for, it’s still happening,” he explained. “Nothing has changed.”

Part of why things aren’t actually changing, he said, is because the companies are telling lawmakers and Defense Department officials what they want to hear. He sees it often during town halls with base leadership, when company representatives apologize again and again for what service members are dealing with, but don’t actually take action.

And Roellchen is tired of being apologized to.

“You can sit here and tell me that you’re sorry all you want,” he said. “I don’t want sorry, I want you to do the job.”

Update: This story was updated after publication to include comment from Balfour Beatty Communities.