Evicted Days Before Christmas, This Iraqi Translator Was Saved By Those He Served Alongside

When he arrived in Colorado Springs, Colorado, on Dec. 7, with his wife, and five young children, Thomas, an Iraqi … Continued 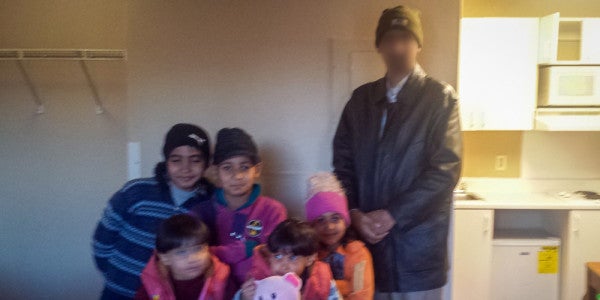 When he arrived in Colorado Springs, Colorado, on Dec. 7, with his wife, and five young children, Thomas, an Iraqi translator who served with American troops from 2003–2006, envisioned new beginnings in their new home.

Two weeks later, he was evicted from his apartment and his family was on the street.

It was a winter night when suddenly Thomas had no place to stay, little money, and was fast losing hope. Christmas was just days away.

After arriving in the states through a Special Immigrant Visa, Thomas received a one-time stipend of $900 per member of his household provided through the State Department, explained Matt Zeller, the founder of No One Left Behind an advocacy group for translators who served with American troops in Iraq and Afghanistan. The funds are dispersed through nonprofit groups, like the organization that set Thomas up with an apartment in Colorado Springs.

But there was a problem. Without a social security card and no gainful employment at the time, he had to depend on the nonprofit in charge of the funding to set up his housing, and it was out of his budget.

The apartment cost $1,030 and a family of seven raised his living expenses to roughly $1,800 a month— far more than he could afford. When prompted to sign a lease, Thomas told Task & Purpose that he refused, opting instead to find a cheaper apartment, which is what led to him being forcibly evicted.

“Because I was not familiar with the system, I did nothing,” he said. After they were evicted, Thomas stayed with a local friend, also an immigrant from Iraq.

Thomas reached out to those he served with in Iraq, and a herculean effort led by No One Left Behind and a collection of service members, veterans, and their families, came together in the following days.

When Mark Steppe, an Army veteran who served with Thomas in Iraq from 2005 to 2006, heard the news, he told Task & Purpose that he was “heartbroken at the way he was treated when he first got here. It broke my heart. He sacrificed everything to make it over here to give his family a chance. He was almost ready to go back to Iraq, he had nothing here. It was just horrible.”

“Quite frankly, we promised them better,” Zeller said, equating the service of translators in Iraq and Afghanistan to that of veterans, adding that they never get to leave the battlefield. In Thomas’ case, he served on the front lines everyday for three years as a translator embedded with American troops in Iraq. Zeller is an Army veteran who credits his unit’s translator, Janis Shinwari, with saving his life during a firefight in Afghanistan in 2008.

When Steppe told his wife, Amy McCambridge, a Marine veteran, that Thomas was in trouble and needed help, they lept into action.

“For me to see my husband, feel the way he felt, through the short week when Thomas got here and to see his reaction when he realized that Thomas was in trouble, and that his family was in trouble, really touched me,” McCambridge explained.

On Dec. 23, she was able to get a hold of Mica Varga who works with No One Left Behind and was in Denver at the time. The next day Varga met Thomas at a cramped hotel room where the family of seven was staying, sharing two beds and two pillows between them.

“It breaks our heart that this is the reality that faces interpreters when they arrive,” said Varga, who worked at the Refugee Resettlement Agency for five years before joining No One Left Behind.

“There’s no resettlement program for these guys,” said Zeller, adding that he doesn’t feel enough has been done to help Iraqi and Afghan translators once they arrive in the United States This is where No One Left Behind comes in, which helped secure more than 300 homes for 1,355 people, including translators and their families in nine cities in the last year alone.

Since they didn’t have an office in Colorado Springs, Varga convinced Thomas and his family to move to Denver, where they had a local chapter that could offer more immediate support. By Christmas Day, they were in a new hotel, this time with a kitchen, and two bedrooms, and by Dec. 30, they found a new apartment with rent and deposit paid for by No One Left Behind.

“That made our hearts so full, especially on Christmas morning, the best feeling ever was to know that they were ok, because he sacrificed for our country,” said McCambridge, who served as a radio operator from 1998–2002.

“They come over here with nothing, just hoping for a piece of the American dream,” said Steppe.

Now, one month to the day after he arrived in America, Thomas has a home, a driver’s license, and has a lead on a job in Denver.

“I wish this was my first day in America, but I’ve forgotten all the bad, because the future is better,” said Thomas.