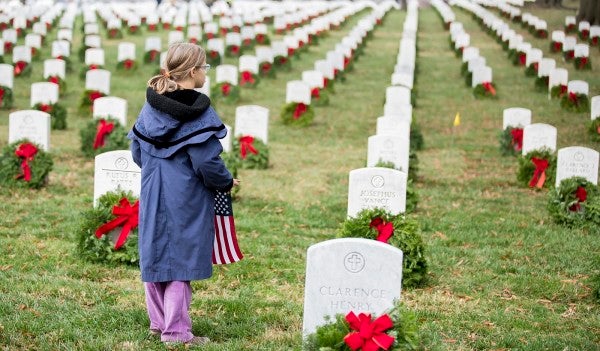 Gold Star family members might finally see an end to the so-called “Widows Tax” thanks to the National Defense Authorization Act of 2020.

On Monday, Congress released the finalized version of the NDAA, which must be passed by the House and Senate before going to the White House. If President Donald Trump signs the defense bill into law, it would put an end to a benefits offset that has barred some Gold Star families from receiving two different sets of survivors benefits that they're entitled to.

“TAPS is incredibly excited to see an issue that's been going on for decades finally resolved,” Ashlynne Haycock, the deputy director of policy and legislation for Tragedy Assistance Program for Survivors, told Task & Purpose. “We're excited to see Congress finally pass this bill. Excited for the impact it's going to have on the survivor's community”

“I've been working on this for 18 years, and it's never been this close,” added Haycock, who is a Gold Star family member, herself.

Beyond the Service Members Group Life Insurance policy, which provides a one-time lump-sum payment for those who elect to sign up, there are two different types of survivor benefits available to military spouses and children.

As Task & Purpose previously reported, there's the Survivor Benefits Plan (SBP), a Department of Defense insurance annuity that varies in amount depending on the service member's rank, and is based on 55% of projected retired pay with 30 years of service.

Then there's the Department of Veterans Affairs Dependency and Indemnity Compensation (DIC), which provides roughly $1,300 per month to a surviving spouse, regardless of the service members' grade or length of service, and is not taxed, nor is it transferable.

Due to a federal rule against “double dipping,” the VA benefit and the military one are offset, meaning that survivors who are entitled to both see a $1 reduction in their SBP benefit for every $1 they get from the DIC. This offset is commonly referred to as the “Widows Tax.”

To get around this, survivors have for years placed their SBP benefits in their children's names. But under the Widows Tax measure in the NDAA, the offset will be phased out over a three year period as follows:

Beginning Jan. 1, 2021 surviving spouses who qualify for both benefits will receive one-third of SBP, in addition to getting the full DIC benefit; by Jan. 1, 2022, that will increase to two-thirds for the military allotment; and come Jan. 1, 2023, surviving spouses will get both benefits in full. At the end of the three year period, it will no longer be possible for a survivor to elect to put the Survivors Benefit Plan in their child's name.

The measure is expected to cost roughly $5.7 billion over the next decade.

“Words cannot begin to express the gravity of this news for the tens of thousands of Gold Star families who have been hurt by this policy for four decades,” Sen. Doug Jones (D-Ala.) said in a statement. “Today, we can finally see the light at the end of the tunnel and I am more hopeful than ever that we can finally end this injustice and show our military families how much their sacrifices truly mean to our country.”

“This provision we secured in the NDAA is a major victory for surviving military and retiree spouses to whom we are deeply indebted,” said Sen. Susan Collins (R-Maine) in a statement. “Its repeal is a step toward fulfilling our obligation to military families who have sacrificed so much for our country.”

Despite the pending repeal of the Widows Tax, there are still immediate concerns for Gold Star families.

For those survivors who placed their Survivors Benefit Plan in their child's name, many of were hit with higher taxes last year due to a change to the tax code.

The increase was due to a change with the “Kiddie Tax” under the Tax Cuts and Jobs Act, which President Donald Trump signed into law in December 2017. The result was that survivors benefits were treated as if they were a trust or an estate.

As Task & Purpose previously reported, many Gold Star family members saw their taxes increase two or three times what they had been years prior.

Because the Widows Tax repeal will occur incrementally over a three year period, Gold Star families are likely to face higher taxes until the offset is wholly ended in 2023.

“The three-year phase in for the child option puts additional urgency on Congress to end the Kiddie Tax, too,” Haycock told Task & Purpose. “We hope Congress will do the right thing and fix that unintended consequence this year.”