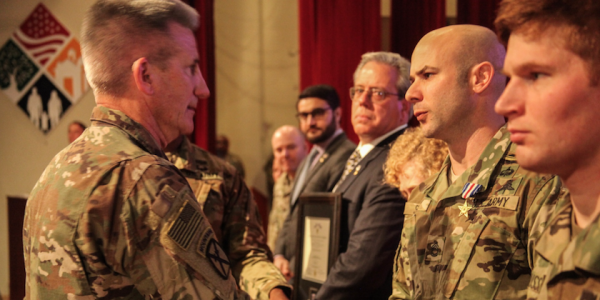 On Feb. 1, U.S. Army Green Beret Sgt. 1st Class Brian Seidl was presented the Silver Star, becoming the third member of his 59-man team to to be awarded the medal for actions during the Battle of Boz Qandahari, which began on the night of Nov. 2, 2016, and cost the lives of two of Seidl’s teammates.

The battle was fought in a village surrounded by steep cliffs in Kunduz Province, Afghanistan. One team member later described the heavily fortified village as “something like a castle.” The team and its Afghan army counterparts arrived in the village after an hour trek through waist-high mud and were clearing compounds when they came under attack.

“We heard a distinctive thud,” Seidl recalled in an Army press release. “That’s when the first grenade detonated.”

The blast, which injured several Afghan soldiers and two Americans, one mortally, was followed by a barrage of enemy fire from all directions. Seidl and his team leader, Capt. Andrew Byers, sprinted toward the casualties and pulled two of them out of the kill zone. Meanwhile, a Green Beret went down elsewhere in the village with five gunshot wounds to his legs, hip, hand, and wrist.

Green Berets of S 10th Special Forces Group (Airborne), and their Afghan partner force, transport wounded soldiers through a hot landing zone to a waiting medical evacuation helicopter while a determined enemy force continues to attack during the Battle of Boz Qandahari, Afghanistan on Nov. 3, 2016.US Army photo

The team’s final objective was a compound blocked by what Seidl described as a “huge metal gate.” As casualties mounted, Seidl and Byers first attempted to breach the gate with grenades. When that didn’t work, Byers tried kicking the gate open, at which point he was mortally wounded.

The Green Berets and their Afghan allies managed to enter another compound, but with one-third of the team either killed or wounded, they were forced to hunker down and hold their ground until a quick reaction force arrived. Small arms fire and grenades continued to rain in from everywhere.

“For two hours we fought in that compound,” Seidl said. [We] fought for our lives.”

The fighting continued even as the team exfiltrated the objective across approximately 800 meters of open territory and a medevac helicopter landed to retrieve the wounded. Byers died from his wounds during the flight out and was posthumously awarded the Silver Star.

Due to the intensity of the enemy fire, the second medevac helicopter was unable to land and the operators were forced to push forward another 300 meters to another landing zone. Seidl and another teammate found a donkey and loaded it with Sgt. 1st Class Ryan Gloyer, the soldier who had been mortally wounded by the initial grenade blast.

Soldiers of Special Forces of 10th Special Forces Group (Airborne) memorialize two of their fallen brothers during a memorial held at Kunduz Airfield in Afghanistan on Nov. 7, 2016. Maj. Andrew Byers, the commander, and Sgt. 1st Class Ryan Gloyer, an intelligence sergeant, were killed in action during the Battle of Boz Qandahari, Afghanistan, on Nov. 2-3, 2016.

“I know we’ve taken losses in the past,” Seidl told the Army. “But I don’t know that we’ve ever taken a loss like this in quite some times, where a team is hit this hard.”

The mission concluded the following morning, on Nov. 3, after every member of the team had been evacuated. According to the release, 27 Taliban insurgents and three Taliban commanders were killed in the battle. In addition to the three Silver Stars, two Bronze Stars with Valor, four Army Commendation Medals with Valor, and six Purple Hearts were also earned during the fight.

“For his efforts taking charge of a severely injured and depleted force, leading them out of a kill zone and establishing a defensive posture that repelled every subsequent attack, for making the tough call on multiple danger-close air strikes near his own position in an effort to eliminate an overwhelming enemy force, and for leading every man under his charge out of a hostile city after inflicting catastrophic damage on multiple Taliban enemies, Seidl was recognized and awarded with the Silver Star Medal,” reads the press release.