For This Hero Dog, ‘Going To The Farm’ Is A Good Thing

Retirement should mean an end to everyday worries, work, and hardship, and for one military hero named Ferra, that’s certainly... 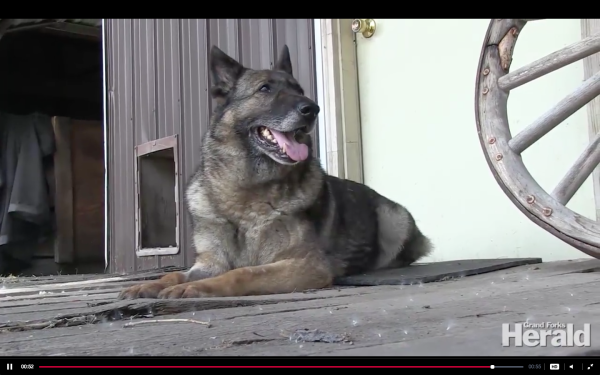 Retirement should mean an end to everyday worries, work, and hardship, and for one military hero named Ferra, that’s certainly the case.

Ferra, a 10-year-old Air Force military working dog, retired from service at Grand Forks Air Force Base, North Dakota, on June 14, reports the Grand Forks Herald. The German Shepherd served in Iraq, Afghanistan, and on a detail attached to the Secret Service during her career.

Ferra was given a 12-ounce rib-eye steak as a retirement gift during a ceremony at the Grand Forks Air Force Base before leaving for good with her new owner, Chad Sherod.

Related: 10 photos that prove the military wouldn’t be the same without its working dogs »

“It's just a big celebration of her retirement, and they're going to hand her over to me and give her a civilian life, just send her off, so to speak,” Sherod said of the retirement ceremony.

About a year ago, Sherod’s previous dog Fendy, also a former military working dog, died of a stroke, so when he heard Ferra was up for adoption, he decided to throw his name in the pile.

Ferra left one military family only to be welcomed by another.

Sherod’s parents both served in the Marine Corps, and live on a nearby farm in Emerado, North Dakota, that Ferra and Sherod visit daily. Ferra began staying with Sharod a week before retiring in order to acclimate to the new environment, which means getting used to farm animals like Tater Tot, one of the horses on the farm.

“She's never locked up in a kennel,” Sherod said. “She's always free to do what she wants. It's a very sweet life.”