A group of vets are raising money to pay for a medal the Iraqi government awarded them, but never delivered

The campaign aims to raise funds to make a small order of awards, all in the hope of convincing the Pentagon to let service members and vets pay to make a medal they already rated in the first place, but didn't get, because the country that awarded it to them hasn't delivered it. 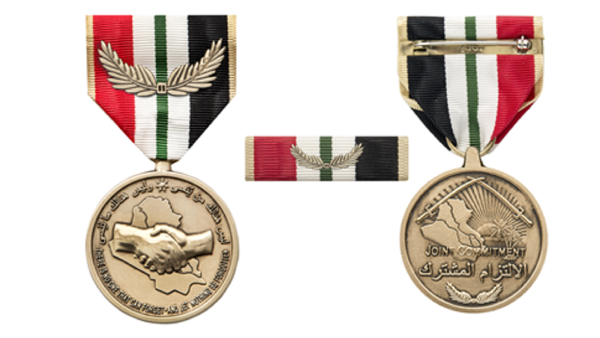 In June 2011 Iraq's defense minister announced that U.S. troops who had deployed to the country would receive the Iraq Commitment Medal in recognition of their service. Eight years later, millions of qualified veterans have yet to receive it.

The reason: The Iraqi government has so far failed to provide the medals to the Department of Defense for approval and distribution.

A small group of veterans hopes to change that.

On Aug. 11, Ed Mahoney, an Iraq war veteran who served in Fallujah and Al Assad, Iraq, between 2008 and 2009, launched a Kickstarter campaign aimed at raising funds to make a small order of awards, with the hope the Pentagon will consider approving the award if service members and vets are willing to pay to have it made.

Though the medal remains unapproved for wear by the Pentagon, if it were ever given the go ahead, the requirements are that: “one must have served for 30 consecutive days or for 60 non-consecutive days within the borders of Iraq, within its territorial waters, or within its airspace during the period of March 19, 2003 to December 31, 2011,” according to the Kickstarter page.

Additionally, “pilots and aircrew members who flew missions within Iraqi airspace will be credited for one day for each day of air operations,” and troops who engaged in combat, or were wounded or injured in the line of duty “to a degree which required medical evacuation from Iraq qualify without regard to the number of days of service,” it continues.

Mahoney, who's still in the Marines and serves as a communications officer, first became aware of the medal a few years ago and decided to look into it.

“What I discovered was DoD had it for action but they weren't going to do anything unless Iraq supplied the initial batch, so I was like, okay, cool whatever,” he told Task & Purpose. “I didn't think too much of it, but then I started doing some digging around, found a bunch of websites, and saw people talking about it.”

“Out of curiosity, I made a few calls to vendors, and they pretty much told me the same story, that Iraq never provided the money for the initial batch,” Mahoney continued.

“The Iraqis actually had it a bit different, they had the stripes going horizontal, vice vertical, and that's not in accordance with DoD or mil/spec standards,” he said, referring to a sample of the original design, featured below:

So he made a slight modification to the medal so it would be within U.S. military uniform standards, which is what's shown on the Kickstarter page:

For Mahoney, this is less a great injustice to be corrected, and more of a pet project: The Government of Iraq awarded military veterans a medal, but never followed through on delivery, so why not see if he could drum up the funds to pay for it through crowd-sourcing?

To be successful, the campaign needs to raise $62,500 before it expires on Oct. 11, in order to pay for 2,500 medals — created by vendors approved by the Department of Defense and the Institute of Heraldry, Mahoney told Task & Purpose.

At least, to start. Roughly 1.2 million veterans of the Iraq War qualify for the award, according to a Department of Defense statement provided to Task & Purpose.

It's a tall order, but Mahoney remains optimistic.

“Either we gin up the interest, in which case we'll solve two things: It'll raise awareness, even if the thing doesn't succeed, and if it succeeds, great,” he said. “So the money that we're trying to raise would pay for whoever backs it, and it'd pay for the machines to be tooled … and it'll allow for 10,000 medals a week to be produced.”

The next step would be to “go back to DoD and say, 'look, we know you wanted Iraq to supply the medals. It ain't ever happening, how many would you be willing to accept to authorize the award?'” Mahoney said. “And kind of play it back and forth like that.”

However, even if the campaign does raise the necessary funds for that initial batch, it'll be a tough sell for the Pentagon, largely because that's not how the Department of Defense handles or approves awards.

“Traditionally when a foreign government authorizes a medal, that government provides the medal to eligible members as the medal is a foreign decoration, not a Department of Defense decoration,” Jessica Maxwell, a Pentagon spokeswoman, told Task & Purpose. “At this time, the Department of Defense has not received any [Government of Iraq Commitment Medals] from the Government of Iraq to approve or distribute.”

“The Department will establish plans and procedures for approving and distributing the medals to the estimated 1.2 million qualifying members upon receipt of the GICMs from the Government of Iraq,” she continued.

As for the Kickstarter campaign, Maxwell went on to add that “Mr. Mahoney's funding effort is wholly independent of the Department of Defense. It should be noted that the suspension ribbon of the medal being promoted by Mr. Mahoney is quite different than the one approved by the Government of Iraq.”

But Mahoney isn't the only veteran to have expressed interest in seeing the medal awarded to those who served in Iraq.

“But as time went by and nothing further appeared to be happening with it,” Caldecott said he decided to create the Facebook group in 2014, and has continued pushing for the award since.

“The main problem at this juncture appears to be that of authorization. The U.S. DOD won't authorize it until the Iraqis supply it,” Caldecott told Task & Purpose via email. “The Iraqis can't supply it so we're currently at an impasse.”

“Interestingly I believe that U.S. troops have to buy their own medals anyway, so it is hoped that should production begin that this will hopefully address the problem, and authorization will be forthcoming.”