Three Marines detained a passenger during an international flight from Japan to Texas on Monday — and they did it in the most 'grunt' way imaginable. 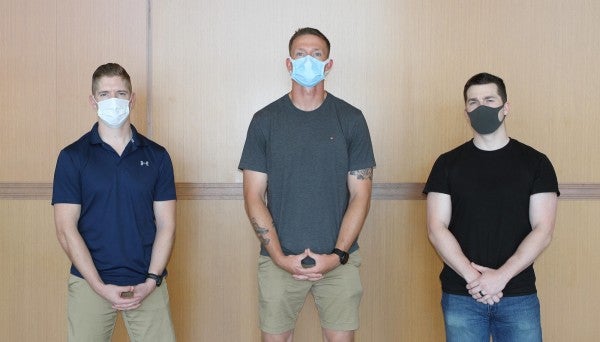 Three Marines detained a passenger during an international flight from Japan to Texas on Monday — and they did it in the most 'grunt' way imaginable: By stacking up outside of the lavatory where the man had barricaded himself, yanking him out, and throwing him to the ground before restraining him with zip ties.

According to a Marine Corps press release, Capt. Daniel Kult, Sgt. John Dietrick, and Pfc. Alexander Meinhardt — all with the Camp Lejeune, North Carolina-based 1st Battalion, 6th Marine Regiment — were returning to the states after a Unit Deployment Program in Okinawa, when a passenger locked himself in the restroom and began making “threatening comments.”

“While watching a movie during my flight from Japan to Texas, I started to hear screaming coming from the restroom on board,” Dietrick, an infantry assault section leader from Mechanicsville, Virginia said in the statement. “When I took off my headphones, I heard a man sounding very distraught and screaming from the bathroom.”

The three Marines then stacked up outside the restroom and prepared to breach. And look, that's not me editorializing or tossing in a little military jargon to jazz this up, the official Marine Corps statement literally described it this way:

“The Marines stacked up outside the lavatory and prepared to subdue the passenger while a flight attendant unlocked the door. The Marines seized the passenger and restrained him with flex ties… The Marines secured the unruly passenger to a seat and continued to provide security for the remainder of the flight.”

As for the Marines' response, Kult, an infantry officer from Coon Rapids, Iowa had this to say:

“We are well trained and it paid off today,” he said, before adding that “we just assessed the situation and acted. Working with the flight crew, we got the door open and from there worked together to subdue him. We didn’t take time to talk it over. We just got ready and did what we needed to help.”

The flight was diverted to the Los Angeles International Airport, where the passenger was transported to a nearby hospital for a mental health evaluation. The incident is being investigated by the U.S. Attorney’s Office for the Central District of California and the Federal Bureau of Investigation.

Of the Marines, Lt. Col. Chris Niedziocha, the battalion commander for 1/6, said he “wasn't surprised.”

“I happen to know all three of them, two of them well, and they are all what I would call ‘men of action,’” Niedziocha said. “I’m continually amazed by and grateful for the people we have in this battalion.”

While there's no video footage, here's how we imagine the incident played out: