We salute Ricochet, the badass therapy dog that surfs with wounded veterans 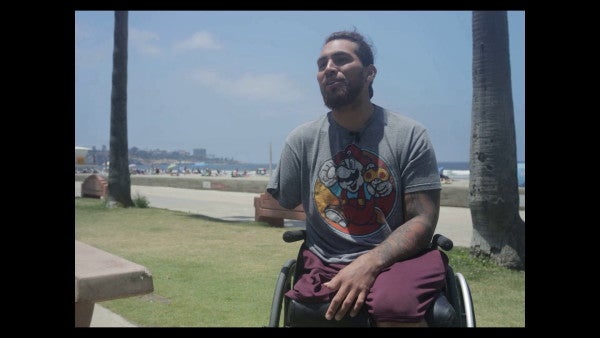 Or, if you want to use her social media handle: Surf Dog Ricochet.

In addition to being a champion surf dog — and how have I gone my whole life not realizing that's a thing — the 11-year-old Golden Retriever is a certified therapy dog who assists individuals with physical, cognitive, or emotional disabilities, as part of the nonprofit Puppy Prodigies, in San Diego. And recently, Ricochet has taken to working with wounded veterans, both as a support dog, and as, well, a bit of a surfing coach.

Jose Martinez and Ricochet out on the water.(SurfDogRicochet)

This summer, Ricochet and Judy Fridono, her guardian and the organization's executive director, met up with Jose Martinez, who served three years in the Army until an improvised explosive device strike in March 2012 left him in a coma for 10 days, and cost him both his legs and his right arm.

“It was difficult, after my accident I was very angry,” Martinez said in a video interview on Surf Dog Ricochet's YouTube page. “I felt like at every single thing I was doing I was a failure. I went to war and I failed at that as well.”

In 2009 Ricochet hopped on the surfboard of a 14-year-old adaptive surfer, becoming the world's first canine-assisted surf therapy and adaptive surfing dog. Since then, she has worked with hundreds of kids with special needs, people with disabilities, and wounded veterans.

“So when I first got the chance to surf it was a whole different world. It changed my perspective and I kept going, said Martinez, who surfs competitively and hopes to make it to the Olympic's and represent the U.S. in Adaptive Surfing one day. “I want people to know and understand that anything is possible. I'm a triple amputee — I was told that I'd never walk again in my life; I walk, plus I surf, plus I swim, plus I do archery, you know? Just keep trying.”