A Toyota truck with a massive Gatling gun that fires 6,000 rounds a minute has surfaced in Yemen

Yes, that will scratch up the bed 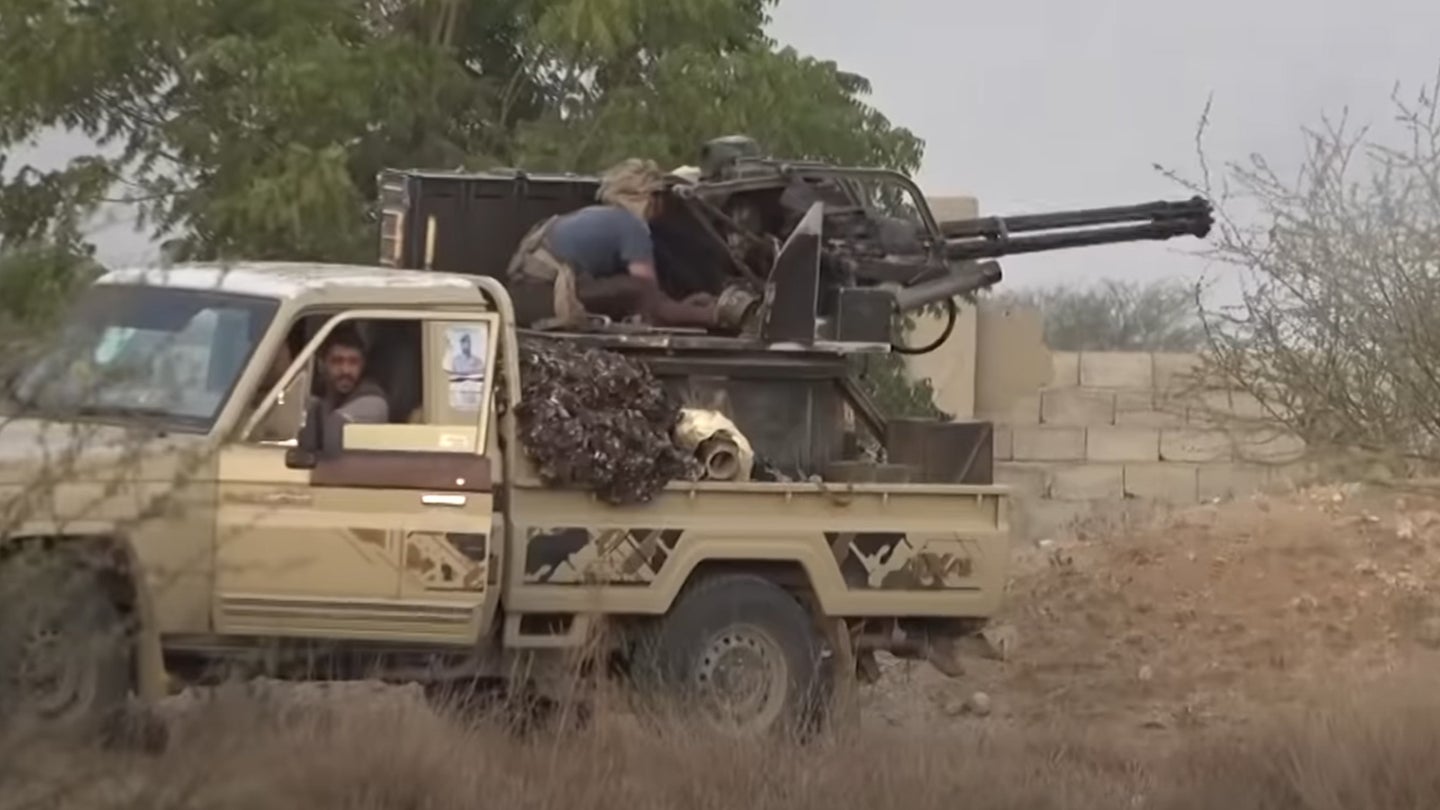 By now a well-known aspect of irregular warfare, technicals are what you get if you take a 90mm cannon, an anti-aircraft gun, or some other large weapon system not intended to be mounted on a vehicle and slap it onto a Humvee or pickup truck.

One recent example shows what happens when a Toyota truck is merged with a monster Vulcan, a six-barrel Gatling-style cannon. That’s a lot of firepower on one very beat-up-looking truck.

The image appears to be a screenshot from a video taken in Yemen, and the technical in question is likely operated by Houthi rebels, who have been fighting Saudi Arabian forces for almost a decade.

It’s not the first time such a thing has happened —  there have been reports of Vulcan cannons being mounted on vehicles before. Whether they come from old military stock or have been captured is unknown, but the Vulcan itself has proliferated widely.

First conceived of all the way back in 1946, the Vulcan fires 20mm rounds at a rate of 6,000 per minute, although it is doubtful that people are carrying around 6,000 rounds of ammunition at any given time. It’s not quite the GAU-8 Avenger 30mm Gatling gun mounted on the A-10, but it can still go “Brrrt.” It’s been mounted on air defense systems and in AC-130 gunships. And, in this case, in the back of a pickup truck.

The concept of a light, durable truck modified to carry heavy weaponry goes back decades. During World War II, the British Army’s Long Range Desert Group used whatever vehicles were available to maneuver across the deserts of North Africa. The term “technical” reportedly appeared years later, during the early 1990s in Somalia, when local warlords were charged for their security services — and their irregularly equipped trucks — as “technical assistance.”

Most of the time, constructing a “technical” is as simple as bolting down the weapon to the bed of the truck. When it comes to choosing a vehicle, though, the choice of a Toyota may be a wise one.

“Trucks like the Toyota are extremely resilient. Even if the weight of the weapon exceeds the truck’s official payload rating, they’re widely considered to be tougher than what the manufacturer claims. Let’s just say anyone with a homebuilt technical isn’t factoring in road safety.,” says editor Caleb Jacobs, one of our colleagues over at The Drive.

The Toyota brand, specifically, is known for its durability. The show Top Gear spent an entire episode trying to destroy a Hilux and failed, and Toyota has tried to crack down on reselling its Land Cruisers due to their popularity in many conflict zones. In other words, there’s a reason that Toyota has itself become synonymous with “technicals.”

And, perhaps, there is a reason you can find so many Vulcans mounted on them. It packs a punch and there are clearly more than enough out there to use.

Correction: This article has been corrected to note that the Vulcan is a Gatling gun, not a chain gun as it originally stated.