In the early morning of April 2, 70-year-old Philip Brooks was eating his breakfast at a Waffle House in Fayetteville,... 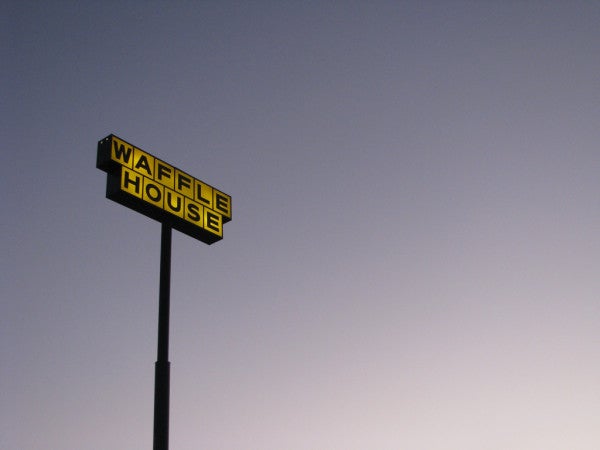 In the early morning of April 2, 70-year-old Philip Brooks was eating his breakfast at a Waffle House in Fayetteville, North Carolina, when a man came in with a gun.

Unfortunately for the gun-wielding man, Brooks had seen his share of rifles.

Brooks was in his regular seat near the register, when the man, brandishing what looked like an AK-47, began demanding money from the cash register, reports WRAL. Customers ran for safety and one woman fled to the restroom with her kids, where she called the police.

“My first three years, I was in the infantry,” Brooks told WRAL. “I did two tours in Vietnam, so I got to see a lot of AK-47s.”

Related: Marine vet who took down armed robber says he followed his instincts »

As Brooks got a better look at the weapon, he realized the rifle was made almost entirely of wood. It also had no trigger, trigger guard, or receiver group.

“All the working parts were missing, so I just told the girls, ‘Don’t give him anything. That’s a fake gun,'” Brooks told WRAL.

Pointing the fake weapon at Brooks, the robber allegedly said, “Well, I'm for real,” presumably in an effort to intimidate Brooks.

“I showed him how real I was,” Brooks said with a chuckle. “I hit him in the nose with my cane.”

As the two circled, cane and phony rifle in hand, they parried blows for a few moments until other customers jumped in and chased the robber off. He is still at large.

Watch Brooks’ interview with WRAL below.