Army Vet Turned Pundit: US Should ‘Normalize’ Kim Jong Un, ‘A Guy Who Has To Murder His People All Day Long’

Let’s all just agree to one thing right now: Whatever our vision of the United States of America is, however … Continued 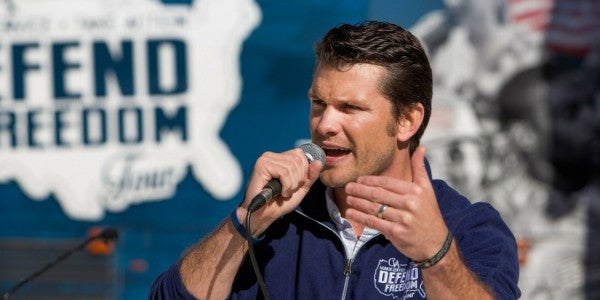 Let’s all just agree to one thing right now: Whatever our vision of the United States of America is, however we feel about its future and its role in the world, it should not look anything like Pete Hegseth.

Let’s not be like the former Bear Stearns banker, Army veteran of Iraq, Fox News personality, and one-time rumored candidate for VA secretary, who on Wednesday appeared on Fox & Friends to pitch for President Donald Trump’s planned North Korea summit, and in a short sound bite went against every principle that makes the United States special — and against his own purported conservative values.

“Why do you think he agreed to this meeting, Kim Jong-Un?” a co-host asked Hegseth this morning. Hegseth replied thusly — emphasis added:

I think he — he wants a picture with the American president… the sanctions are having massive effect there, there’s no doubt. The Chinese have put the screws to ’em on that — the Chinese are still playing a double-game, absolutely — and then I think there’s probably a point at which the guy who wants to meet with Dennis Rodman and loves NBA basketball and loves western pop culture probably doesn't love being the guy that has to murder his people all day long. Probably wants normalization. And let’s give it to him, if it makes the world safer.

Watch the clip for yourself:

Fox host and Trump adviser Pet Hegseth on Kim Jong Un: "The guy who wants to meet with Dennis Rodman and loves NBA basketball and loves western pop culture, probably doesn't love being the guy that has to murder his people all day long. Probably wants normalization." pic.twitter.com/YQAcY1BXh7

I’m at a weird place in writing this, because Hegseth’s statement is so self-evidently twisted and bizarre to me that I’m suspicious of anyone who says they don’t see it. To be clear: There is a substantial danger to the president of the United States meeting face-to-face with a North Korean dictator who ordered his uncle executed by anti-aircraft guns and flamethrowers. It could very easily legitimize the North Korean dictator’s status — his standing and ability to “murder his people all day long” — with only the slightest tangible hope of forging a broader peace.

It’s possible — remotely possible — that a U.S. administration could, with serious effort and discipline, navigate a cautious summit path that avoids an overt endorsement of the totalitarian regime Kim controls by birthright, where 130,000 people are routinely tortured in prison camps “as terrible, or even worse, than those I saw and experienced in my youth in these Nazi camps and in my long professional career in the human rights field,” as one human rights investigator put it last fall.

But what you can’t do — what’s absolutely unconscionable, to the people of the Korean peninsula and the 37,000 Americans who gave their lives in war there — is make a public case like Hegseth’s that Kim has “to murder his people all day long,” but he deserves membership in the community of world leaders anyway, for “peace” and “NBA basketball” and whatever. What you don’t do is make a natural fixture out of a monster.

Does that sound Pollyannaish? Well, then, I beg you not to read anything about dictators that Pete Hegseth wrote before Donald Trump was president. Whatever you do, don’t read Pete Hegseth’s gushing words of solidarity with the long-suffering Iraqi people against Saddam Hussein. “[E]liminating Saddam and liberating Iraq could be the 'Normandy Invasion' or 'fall of the Berlin Wall' of our generation,” he wrote at Princeton when he was still an ROTC cadet. “The Iraqi people are eager to be rid of Saddam, and there is equally encouraging evidence that republican principles could thrive there.”

For sure, you shouldn’t read his lofty dispatches for the National Review when he was in uniform in Iraq, or his reflections when the war turned 10. “Saddam Hussein was an undeniably dangerous dictator, with a history of belligerent behavior and a record of supporting jihadists in the region,” he wrote. “While critics of the war have long preferred to gloss over Saddam’s record as if pre-invasion Iraq had been tranquil and misunderstood, surely no one wishes Saddam were still in power.”

You should definitely avoid Hegseth’s broadside against the previous presidential administration for kowtowing to dictators like Bashar Al-Assad. “[T]he Obama administration’s equivocation and vacillation go far beyond Syria,” he wrote. “In Libya, Egypt, Iran, Afghanistan, and elsewhere, the president’s naïve and schizophrenic worldview — based on an apparent belief that the United States ought to withdraw from the world and negotiate unconditional, unilateral, and mythical peace — has sent signals of weakness.”

Don’t read Hegseth’s Benghazi-inspired rant against “this [Obama] administration’s ‘Stand Down’ foreign policy” — under which “Rather than aggressively confront enemies (with the notable exception of bin Laden), we appease them.”

And whatever you do, don’t check out his feelings about American presidents meeting with brutal dictators on Twitter:

But that was another president. Things are different now, right?

For decades now, we have heard conservatives blast liberals for coddling some of the world’s worst miscreant leaders and violent threats, for not standing up to evil when it violates human liberty. It harkens to a noble if much-abused ideal, that some things are worth fighting for. It was enough to get me to put on a uniform once. And you still hear conservatives banging that drum today, over Iran, at least.

But now, because we have a president who impulsively and without consulting his advisors accepted North Korea’s open entreaty to have a seat at the table of nations, and that president happens to identify (for now) as a Republican, the Pete Hegseths of the world clamor to normalize a petty dictator’s murderous impulses. Kim has to do it, you see, but he’d prefer not to. He’d rather watch the NBA semis. And anyway, if he’ll give us his nukes, he’s free to kill at home all he wants.

As Hegseth once wrote, about another war and another dictator: “Talk is cheap, but a legacy of resolve is forever.”