Social media can be a weapon, and it’s time US troops get trained on it

Leaders need to be taught the risks and rewards of social media in a new era of information warfare. 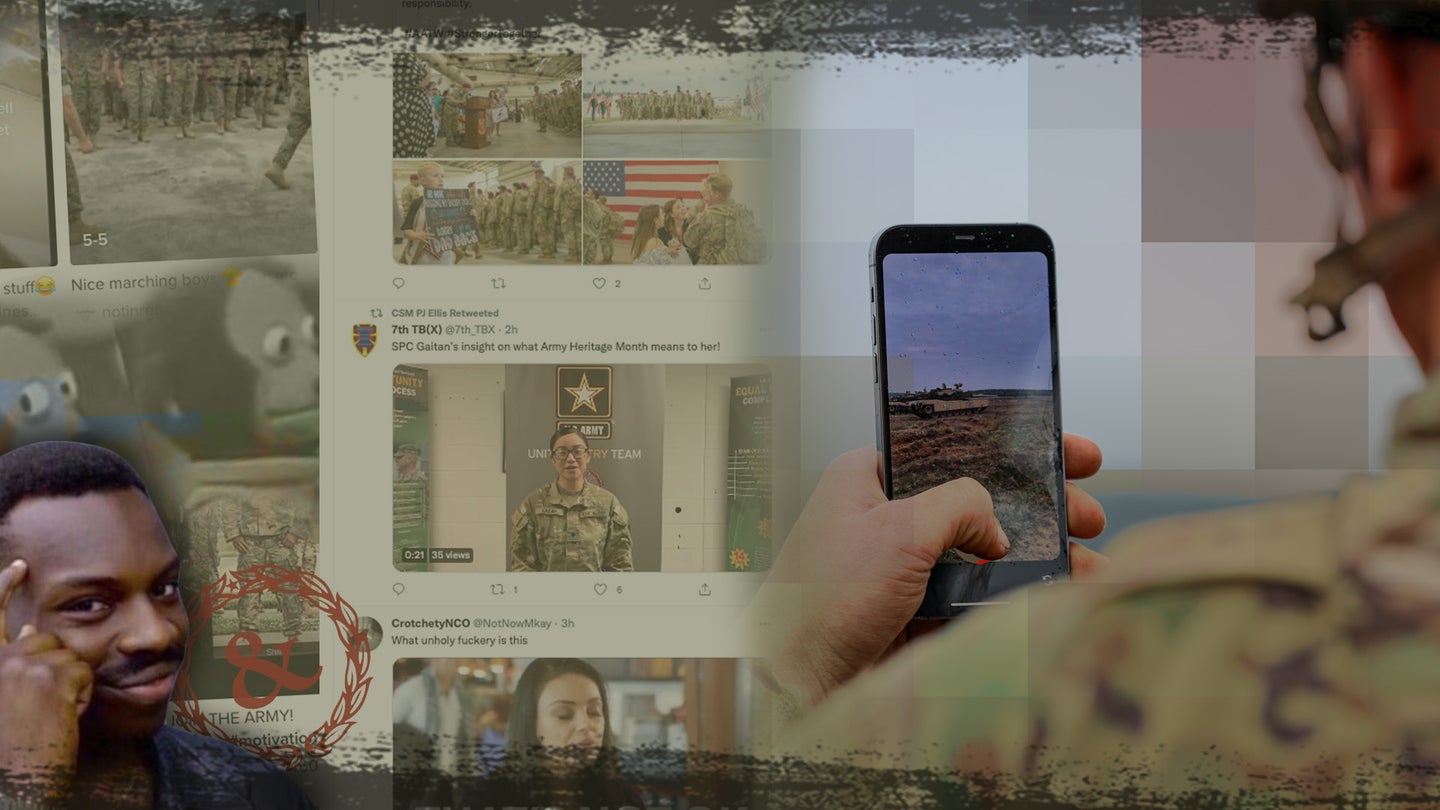 On a Saturday evening, the Twitter handle @DogFaceSoldier tweeted, “Enjoying a beautiful fall day with family in Amana Colonies, Iowa.” Five days later another tweet goes out – this time,“Moderna booster in the right. Flu shot in the left,” noting that his wife, Connie, received the same. The tweet reached 406 likes. Minutes later, @broadcastmike jokingly suggested an arm workout the next day. Within twenty-four hours @DogFaceSoldier posted “WOD dB upright rows and curls. Feeling great! In other words, get the shot.” By the following Saturday, @DogFaceSoldier is back to typical content, posting a successful trip to a newfound Korean BBQ restaurant.

Over the course of a week, @DogFaceSoldier seamlessly wove a pro-vaccination narrative through a relatable twitter diary of Americana references and images. @DogFaceSoldier’s 21,400 followers experienced the comfort of the American Midwest, the satisfaction of toughing out a workout, and the joy of finding a new restaurant, all while also consuming pro-vaccination messaging. @DogFaceSoldier is not an influencer or public affairs specialist by trade, but the content he produces and the routine interaction with followers presents a transparent and trustworthy image. This is particularly significant since @DogFaceSoldier is Gen. Robert Abrams, a retired four-star general in the United States Army.

General Abrams’ intuitive navigation of social media is an essential component of his effectiveness as a leader. Through one-on-one interactions coupled with social media amplification, Abrams authentically promotes professional ethics and Army values outside an institution that is typically rigid and hierarchical. Through social media, Abrams reaches an audience, both civilian and military, who might not otherwise have the opportunity to engage with senior military leaders. Gen. Abrams is not alone in his pivot to social media and #MilTwitter as a tool of leadership. Service members from all branches and ranks convene on social media to contribute to what Peter Singer calls “the new war college seminar room, military journal, and officers’ club barroom rolled into one.”

Despite the evolution of the military profession online, for many practitioners, social media entails potential career-ending pitfalls, self-promotion, and partisanship. Lt. Col. Joe Byerly and Capt. Dan Vigeant highlight that social media users who dismiss the significance and permanence of social media often, “share emotionally charged posts, fight trolls, or, specifically, express outrage over a hot button social or political topic.” To avoid these pitfalls, Byerly and Vigeant recommend that military leaders self-censor their messaging or refrain from using social media altogether. To be sure, these online interactions are damaging to the nonpartisan ethic and military values. Nevertheless, avoiding social media is unsustainable.

In the era of disinformation and declining institutional trust, rather than leave ‘Tweetership’ to the discretion of individual users, the DoD should establish a more comprehensive social media literacy education program. The armed forces must reframe perceptions and applications of social media from risk aversion to risk awareness. Social media will remain an essential part of society, irrespective of DoD use. By avoiding this space, military leaders miss out on critical opportunities for connection, information gathering, and leadership. A culture of risk aversion over the last two decades has inhibited the effective, innovative, and safe delivery of digital defense communications initiatives. By instrumentalizing and operationalizing the various platforms through social media literacy education, leaders will be better equipped to navigate the online space.

To ensure the armed forces are prepared for the contemporary operating environment, the Department of Defense should move beyond an ad hoc approach to online engagement and implement proactive social media literacy education at both the unit level, as well as throughout professional military education. In a 2011 HASC Hearing on Strategic Communication and Information Operations, strategic communication is defined as, “Focused United States Government efforts to understand and engage key audiences to create, strengthen, or preserve conditions favorable for the advancement of United States Government interests, policies, and objectives through the use of coordinated programs, plans, themes, messages and products synchronized with the actions of all instruments of national power.” By more effectively nesting social media literacy under a broader discussion of strategic communication, leaders will be better equipped to engage productively and authentically online with key audiences.

The information revolution has transformed social interactions the world over. Through responsive algorithms, social media platforms are retrofitted to ameliorate the user experience by facilitating communication and interaction within communities of interest. Individuals from vastly different backgrounds and physical locations can coalesce online around shared beliefs or experiences. As a microcosm of civil society, the U.S. Military is no exception. Groups such as #MilTwitter have emerged to foster community cohesion and facilitate discussion. Here, General Abrams and others use social media as a conduit to connect with the Armed Forces and understand the operating environment. Social media use by service members has become so routine and commonplace that, according to Sarah Maltby and Helen Thornham, it is “part and parcel of a wider host of unconscious, mundane and quotidian actions” in military life. By expressing the desired core military values through social media, leaders are able to integrate strategic messaging into the everyday lives of service members.

Using the aforementioned case as an example, Gen. Abrams’ appeals to popular images of American life create a relatable and accessible narrative. By establishing a connection with followers, Abrams is able to convey critical messages, such as the need for vaccination, interspersed with lighthearted content. Scrolling through Abrams’ thousands of followers, the reach of social media for modern military leaders becomes apparent. Accounts range from fellow generals to junior enlisted service members, curious civilians, and bots. For this reason, the messages published on social media by senior leaders and service members more broadly are elements of strategic communication, whether or not this is done intentionally. Unlike the traditional applications of monologue, dialogue, and collaboration in public diplomacy, social media allows the user to bypass the bureaucratic and structural obstacles of strategic communication. This is particularly important in a traditionally hierarchical organization such as the military. Social media flattens the chain of command, to the extent that a cadet can direct message (DM) a colonel for advice and likely not think twice about it.

Facebook is now 18 years old. That means the youngest recruits have only known a world where social media is ubiquitous. From a recruiting standpoint, this makes social media an essential tool to reach the next generation. Younger social media users seek out what are known as “parasocial” relationships with social media influencers. Scholars of social network development have observed that Generation Z is “accustomed to endless messages and multiple information sources around them.”  For this reason, Gen Z values authentic engagement and realness or “parasocial” relationships with other users. While the military branches run official social media pages, the lack of dialogue and understanding of the audience diminishes the effectiveness of mass broadcast. The value add of social media for the purpose of recruiting is not the content quantity, but the return on content, meaning engagement and dialogue. For this reason, an individualized approach to social media, where senior leaders are empowered to curate and personalize their pages, would more effectively reach potential recruits.

This same logic can also be applied to the civil-military dimension. The impact of social media literacy in the context of civil-military relations is twofold. Firstly, the military has a complex culture and unique culture that, according to a 2019 RAND report “can be “very inaccessible to nonmilitary audiences.” In a 2013 survey for Warriors and Citizens, Kori Schake and Jim Mattis found high levels of unfamiliarity with the military among young adults.  Historically, the services have struggled to craft content that is relevant and interesting to civilian audiences. Individual users such as General Abrams, break down the civilian-military barriers and demystify the life of a senior officer. By practicing radical transparency — or what some call oversharing — Abrams establishes credibility and trust with audiences.

In an era of declining institutional trust, consistent messaging is critical to the continued support and trust of the military. According to Capt. David Harrell, social network analysis “would add a layer of understanding to a readily available representation of a civil populace’s concerns and thoughts.” Secondly, social media literacy education is critical to maintaining the military’s nonpartisanship. In a 2017 study, Dr. Heidi Urben found that “over one-third of respondents reported their active-duty military friends used or shared insulting, rude, or disdainful comments on social media directed against elected leaders, including the president.” Social media literacy education and mentorship are essential to maintaining professional ethics online. By establishing digital communities as an extension of traditional engagement, the armed forces will be able to make clear what is tolerable behavior.

The heightened relevance of social media for the armed forces necessitates an integrated solution. A visit to the DoD CIO website for social media is indicative of the low prioritization of social media literacy. “How to Tweet” guidance was last updated in 2010. To effectively tap into the benefits of social media, the DoD must shift from a policy of risk aversion to risk awareness. The best strategy to avoid the pitfalls of social media is preemptive education and mentorship. In doing so, individual leaders will understand the risks of social media, as well as the tools for successful communication. Military-centered social media groups have evolved to become epistemic communities, where the convergence of identities, assumptions, and opinions has a disproportionate impact on policy. To account for this shift, a comprehensive social media education program should encompass everything from individualized mentorship to Professional Military Education (PME).

Within PME, the Directorate for Joint Force Development (J7) is best situated to integrate social media literacy into the curriculum. By nesting social media within Joint Learning Area 1, Strategic Thinking and Communication, officers will be better equipped for future strategic challenges such as recruitment and retention. JLA 1 language requires officers to, “demonstrate advanced cognitive and communications skills employing critical, creative, and systematic thought “ and to “persuasively communicate on behalf of their organizations.” These outcomes should be expanded to social media use, where the operationalized use of strategic communications has just as significant if not greater reach. Moreover, the J7 should establish social media literacy as a special area of emphasis. By integrating social media literacy into all levels of education, from entry to senior level PME, the armed forces will bring leaders into the more complex landscape of modern communications.

Social media is not a passive tool. Leaders need to be able to produce content while also balancing operational security in domestic and global media ecosystems that are constantly evolving. Capt. David Harrell accurately notes that “Social media is no longer a new and untested medium of war but is rapidly becoming a pillar in which insurgency groups, revolutions, or anti-government movements are built on.” A comprehensive social media literacy program generated by the J7 would teach leaders how to communicate their desired goals and messages in the fluidity of social media. This is critical for a connected force, both current and future, as well as for the restoration of institutional trust.

Hannah Smith serves as a Program Specialist for the College of International Security Affairs at the National Defense University. She is a graduate student at Georgetown University’s Walsh School of Foreign Service in the Security Studies Program.