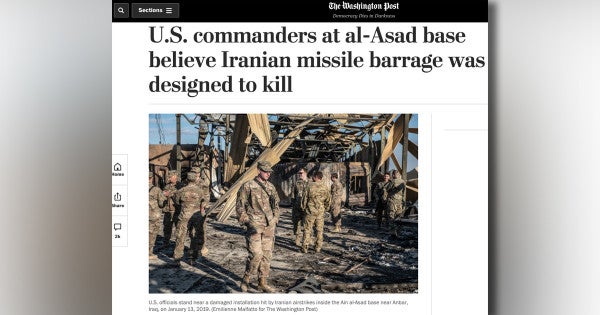 As I spend most of my day online, it takes a lot for something to truly make me gasp.

But while taking my daily stroll through the unofficial Army Reddit page today, I saw something truly spectacular nestled among the tomfoolery and general questions that litter /r/Army.

“Legendary E-2 Makes Front Page of WaPo With Hands in Pockets. Paper Refers to Him as ‘U.S. Official,'” the Reddit post’s title reads.

It’s one thing to be caught by the higher-ups with your hands in your pockets — a violation of Army Regulation 670-1 — but to be photographed and then used as the cover photo of a Washington Post story is next-level.

The Post’s caption, as Reddit points out, is just the icing on the cake: Identifying a PV2 (along with the soldiers around him) as a “U.S. official.” Everything about this is so beautiful it almost makes me emotional.

Is this private the hero service members everywhere have been waiting for? Was his ass handed to him on a silver platter upon his chain of command seeing this photo? If you know this man, I beg you to keep me updated.

I am both in awe of, and terrified for, this lad — though he’s in good company. The two soldiers to his left appear to both have their hands in their pockets as well, seemingly even joined by the third soldier behind them. Still, as one fellow journalist pointed out, that legendary private may have been just taking after his platoon leader.

These soldiers did, after all, just dodge a missile attack by the Iranians that as the Post story says is believed to have been “intended to kill American personnel.”

Surely they deserve a little slack.

Update: This post has been updated to clarify that /r/Army is not an official Army Reddit page.