Review: the Gerber Straightlace is a classy, classic pocket knife for under $50

It looks better than you do in that suit, I promise. 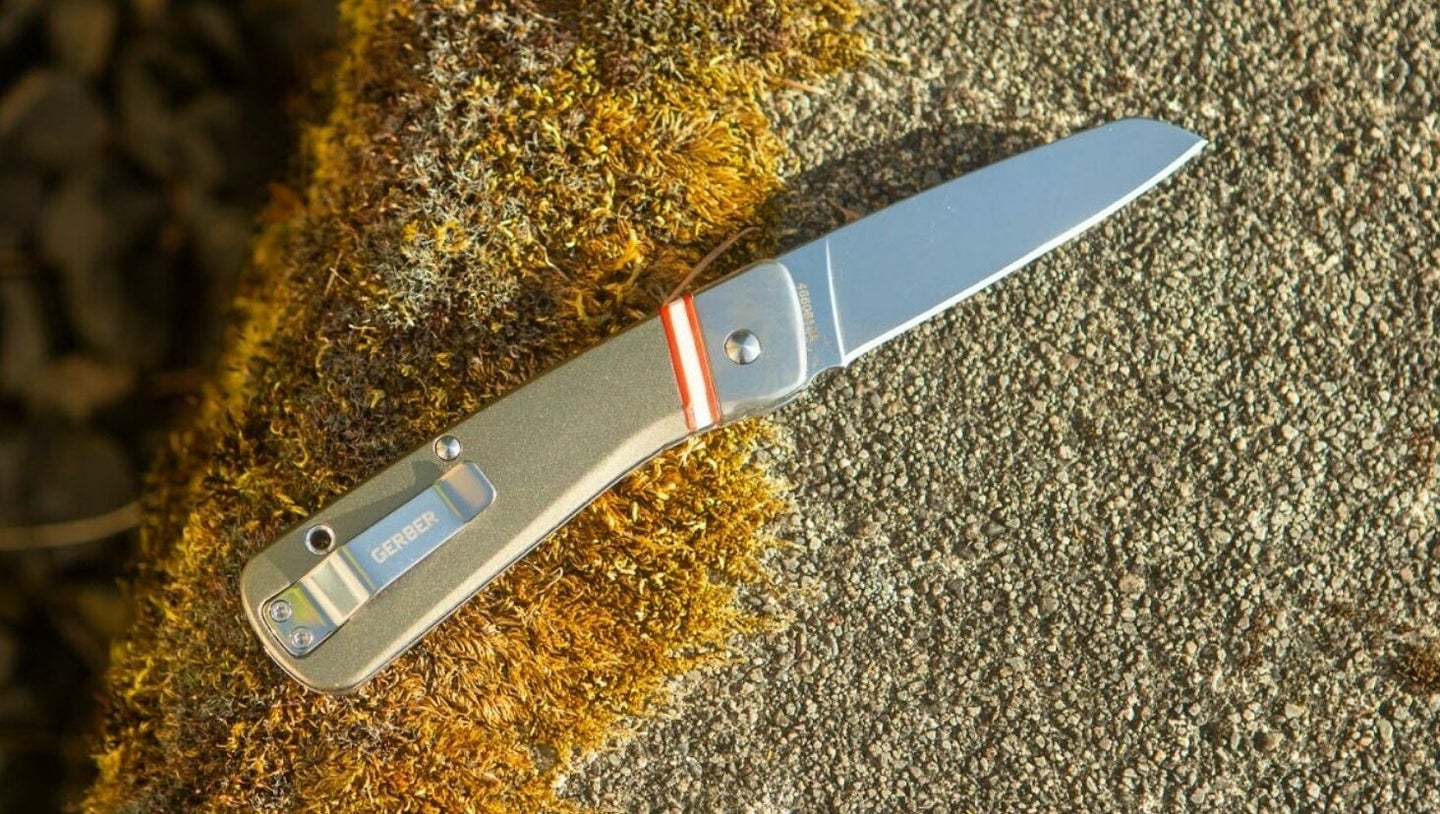 While knives were an everyday part of my life as a loadmaster in the Air Force, handling everything from screwdriver duties to opening cans of hydraulic fluid or just trimming fuzz or loose threads from a uniform item, I no longer live that life. These days, I’m going in and out of security multiple times a day, and I wear a suit while I’m at it.

I still love knives and find uses for them, and my reference for usefulness outdoors is the Mora Garberg (although mine is stainless). I keep that guy in my truck’s center console and several Mora Companions stashed in other vehicles, my range bag, and my bugout bag. Seriously, you can never have enough of those things. I can’t carry a Mora in a suit though, and that’s where the Gerber Straightlace stepped up.

Gerber makes dozens of awesome knives and I’ve loved having a few of them in my rotation. The company still makes one of my all-time favorite folding knives, the Gerber Gator (still made in America, no less!). It was a favorite of mine in the Air Force and I carried one in my flight bag for about five years. I had an opportunity to try some of Gerber’s new knives and I was super happy to take their new gentleman’s pocket knife for a test drive.

The Gerber Straightlace is about as straightforward as it gets. It’s a handsome blade that immediately reminded me of the Boy Scouts. Or the Marine Corps. Polished stainless, a light OD green, and a red and white stripe through the top of the grip. The first thing I noticed past the color scheme was the heft. The knife is mostly metal and feels like it. It smacks of quality in an unexpected and delightful way, considering the Straightlace’s cost.

I found that the Straightlace felt good in my hands right away. The only sharp detail on the knife is the edge of the blade, and I love that about the Straightlace. No sharp corners or uncomfortable protrusions to get in the way of using the knife. The pocket clip has an etched Gerber logo on it and well-rounded corners.

The clip is reversible, which is good, but I was worried that it would interfere with my grip. I’ve had problems with clips digging into my hands, so the clip being reversible was a plus. To my surprise, I found I didn’t need to switch it around after using the Straightlace for a few days.

The blade itself is made from a Chinese equivalent of 440A stainless steel and comes in the classic “sheepsfoot” shape popular in gentlemanly pocket knives for over 100 years now. Sheepsfoot blades are incredibly useful for slicing and cutting in places where a slip would be disastrous. The hallmark of a sheepsfoot blade is a long, nearly straight blade with a deliberately blunt point to avoid stabbing yourself or the object you’re cutting. It’s this anti-stabbing feature that really cements a sheepsfoot knife as the tool of a gentleman rather than a petty criminal’s shank.

Other details important to me were the overall size: a blade just short of 3 inches and an open length of nearly 7 inches. It’s nice to see a properly sized pocket knife here, one that fits my hands and isn’t comically small or uncomfortable to hold.

The Gerber Straightlace is clearly a pocket knife and doesn’t have that “tactical” vibe to it, which is great for situations where you can’t carry a Gator. It’s a knife that gives off a strong “success is 90% preparation and 10% perspiration” aura. I’d expect the person using this knife to be slicing some expensive niche fruit, like an $8 foreign pear from Whole Foods. Let’s put it to work with that same energy.

How we tested the Gerber Straightlace

I’m not much of an expensive pear guy and generally don’t have $8 for a piece of fruit. I do have a regular and recurring need to slice stuff, from pizza to beer boxes, and occasionally misuse gentlemen’s knives for camp tasks like the peasant I am.

Much like the Kershaw Shuffle II and Mora Companion I tested before, I did dirty things to this pretty prize of a knife. I hacked at firewood to see if the blade steel was strong enough for manly pursuits. I broke down the prodigious amount of cardboard that accumulates from whiskey-induced Amazon binges.

Living near Amazon HQ has its advantages, both in speed of delivery of said cardboard and the fact that I have the Cascade mountain range as a backyard to play in. I have lots of cardboard to cut and plenty of ground to explore with what I hoped would be a useful knife. My hopes were met.

While I’ve used my Mora Companion to dig around in rocky soil for tent-stake killers, I couldn’t bring myself to do that with the Gerber Straightlace. It’s too nice for that sort of work. The polished blade has a little etched Gerber logo on it and I couldn’t find any of the “made in China” stamps that usually adorn blades in this category. The thought of scratching the serial-numbered blade nearly made me break out in hives.

I thought I’d torture the Straightlace by making a feather stick, but it turns out it does it well. It was still crazy sharp after, too. I legitimately wanted to hate this knife but I couldn’t. The colors reminded me of my sworn enemies — Marines — but like a good Marine, it was simple, inexpensive, strong, and polished. It would also take a Marine to break the thing.

The Gerber Straightlace is great. It’s understated, with classic lines and a subtle yet effective color scheme. It’s sharp, holds an edge well, and is comfortable to hold and use. I was impressed with the all-metal design (save for the red and white handle trim) and simplicity.

The Gerber Straightlace is just the right size when it comes to a pocket knife. It’s neither obnoxiously large nor comically small in my hands. The knife feels solid and I genuinely liked using it. The Straightlace takes the scrappy edge off of modern pocket knife design in the same way a fountain pen differs from a “tactical” pen. They both write and both have a sense of purpose to them, but the fountain pen has a seriousness to it that begs you to write notes rather than cut seatbelts or break windows. I love that the Straightlace quietly urges you to use it without screaming about combat scenarios.

I found two things about the Gerber immediately annoying. First, you can’t open the knife with one hand. It’s nearly a deal-breaker for me, but I’m not a gentleman. I tend to think that if I need a knife to cut something, I’m holding the thing in one of my hands. That would generally mean I’d have one hand to manipulate another object, like a pocket knife. If I need both hands to open the thing, then what’s the point? I might as well set everything down and storm back to my kitchen for a cleaver. At least that would make me feel better.

Maybe it’s not fair to harp on the Gerber Straightlace for that reason — a proper gentleman, like a boy scout (or Marine) is always prepared. The true gentleman will have thought ahead and opened the knife prior to picking up that $8 pear.

Second, while the slip-joint is classic in gentleman’s knives, it’s not something I trust. Gerber did well with a very strong slip-joint, but it’s not a lock, and it feels sketchy to use in some situations. Maybe this is just me, but I tend to put my thumb on the back of the knife for extra control. That, combined with cutting pressure, meant that I had slightly more force on the back of the blade than actual cutting force. One slip of the knife, and there’s a good chance that the blade will close right onto my hand. Can’t say I’m a fan of slip-joints, although they have an arguably brilliant feature — you can close them quickly, easily, and safely with one hand.

I love this knife. It has a few things I’d change, like the slip-joint and lack of a thumb knob for one-handed opening, but overall it’s a wonderful little knife. The colors are great, I like that it’s a solid chunk of metal, and the sheepsfoot shape works well in this application. It’s plucky and classy, like a wealthy Boy Scout, and it’s the type of tool I aspire to use. I’m happy to have it in my stable, and you will be, too, provided you can get over the lack of a lock or thumb-assisted opening. For $36, you’re not going to do much better than this all-metal gentleman’s knife.

FAQs about the Gerber Straighlace

Q. How much does the Gerber Straightlace cost?

A. The Gerber Straightlace costs about $36 shipped.

Q. What is a slip-joint knife?

A. Slip-joint knives like the Gerber Straighlace have no mechanism to lock the blade in the “open” position. Slip-joint knives are much simpler than locking knives and slip-joints are most often found in non-threatening styles of pocket knives. These knives require a little more care in their use because a clumsy movement could close the blade onto the user’s hand. The main benefit (besides simplicity) to a slip-joint knife like the Gerber Straightlace is that they are legal to carry and use in places where locking knives are not. Keep in mind that it is your responsibility to know the laws where you live and that this isn’t legal advice.

Q. What is a sheepsfoot knife blade?

A. Sheepsfoot refers to the shape of the blade. Much like a tanto is designed for stabbing, a sheepsfoot blade is designed specifically to prevent stabbing while maintaining a long slicing edge. The Gerber Straightlace is a good modern example of this ancient English style of blade.

Q. Where are Gerber knives made?

A. Gerber designs all of their products in Portland, Oregon, and makes about a third of their knives and tools at their factory in Portland, with the rest split between Taiwan and China. The Gerber Straightlace is made in China.