Review: Morakniv’s Companion S gets you Swedish steel for a steal

This may just be the best fixed-blade knife under $50 out there. 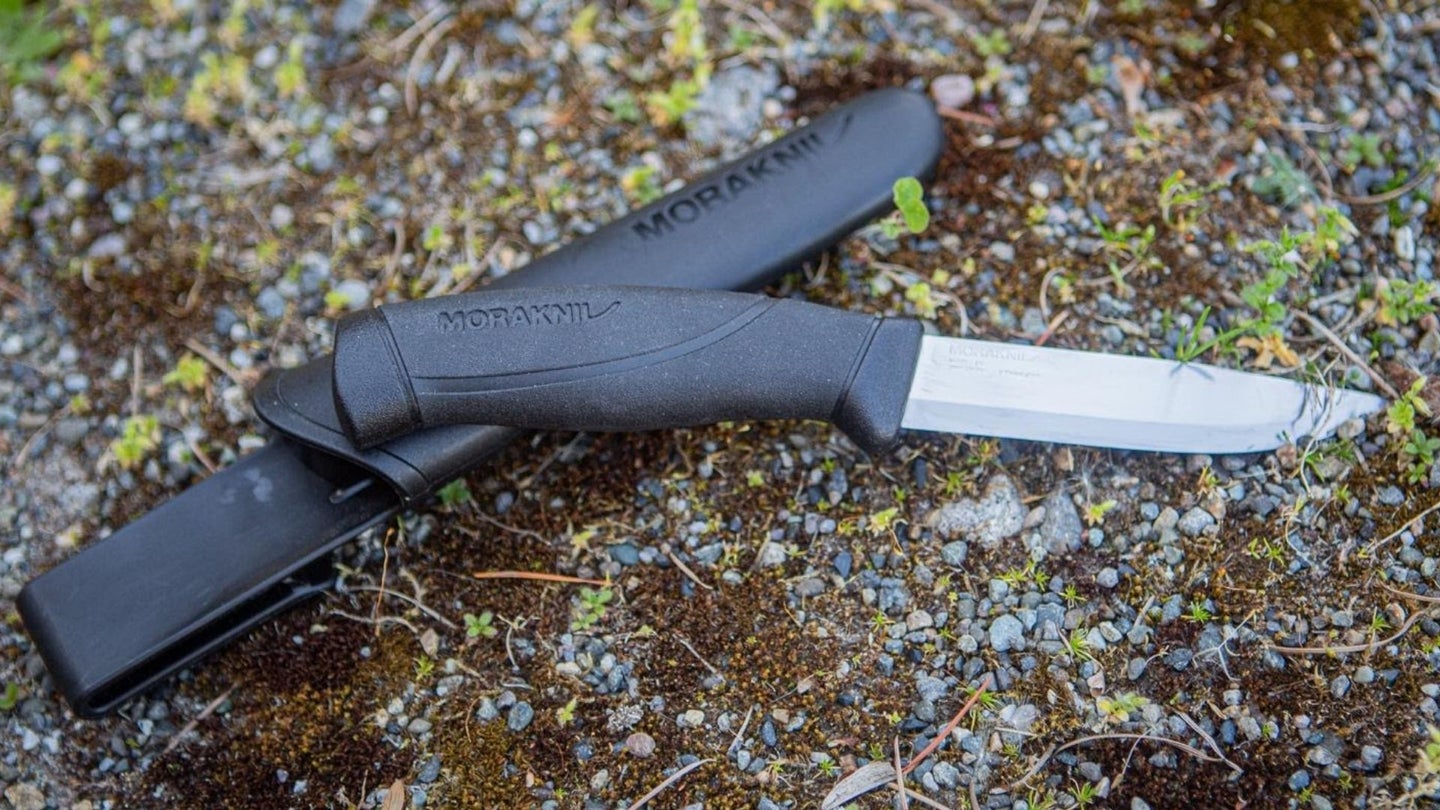 Knives were indispensable for me when I was a loadmaster on C-17s in the U.S. Air Force. During my eight years of service, I ran through a bunch of folding and fixed blades from popular brands, some issued and some purchased. I’m embarrassed to admit to some of the daily abuse I gave them. We’re talking cutting metal box seals, trimming cargo straps, prying open panels, splicing wiring, opening cans of hydraulic fluid or engine oil, and occasionally some first aid duties in addition to the regular stuff. You know, such cringeworthy, knife-destroying feats like subbing in for a flathead screwdriver, digging in sand or dirt, starting fires, and everyone’s favorite: target practice. If you didn’t learn to throw your bolt knife in SERE, you probably lied on your resume.

A good, sturdy knife is probably the best multitool you’re going to find outside of a purpose-built multitool like. I’m no longer a loadmaster, which means my work clothes don’t have a knife pocket on my thigh, but I still keep a few knives handy. My wife and I both have the Companion S. I keep one in my range bag and another in my camping gear, and she keeps one in the center console of her car. Why so many? Because they’re inexpensive. At $15, you won’t have a meltdown if one disappears (I won’t say “if you break one” because good luck with that).

And that’s exactly why you should buy one: for a relatively solid fixed-blade, you simply can’t beat this price.

Your experience might be different, but this Companion S (stainless version, the “C” version is carbon steel) shipped bare. That’s right, no box. Just a clear plastic bag with a sheathed knife in it. Holding it, you can’t really tell it’s cheap. The sheath is a thick black plastic with little shine. The tactician in me loves that when it’s sheathed, there’s nothing reflective to give it away. This one is black, but it comes in an impressive array of colors. My wife’s is neon green (“for zombies,” according to her). The one in my camping bag is safety orange so we can find it without turning on a flashlight.

The only decorations on the sheath are a debossed “MORAKNIV” toward the tip on the show side, and the back side has “Made in Sweden” stamped in. The belt loop is super sturdy and has a serious keeper hook on it. If you’ve used a good-quality paddle holster, you’ll know the type. You won’t need to worry about the knife coming off your belt if you snag on something while running around.

There’s a couple of neat features that aren’t obvious right away. On the back of the belt loop, there’s a set of openings for hanging the knife on a peg, a uniform button, or snapping into a carrying system. There’s also a little textured thumb pad for popping the knife out of the sheath.

The knife itself is surprisingly sturdy. It’s heavier than you might initially suspect  and pops out of the sheath with a very satisfying positive silent click. The Companion S blade is 4.1 inches of 1/8th-inch stainless steel and has a textured and soft TPE rubber grip section. It’s straight, to the point, and feels useful in the hand more than anything else. It screams “tool” and I love it.

How we tested the Morakniv Companion S

Everything about this knife is utilitarian, so it’s only appropriate we test its “utility.” While I no longer have a stash of boxcar seals to chew through, I have plenty of cans to open, fasteners to tighten, panels to pry up, rocky soil to dig in, wiring to hack at, 550 cord to cut, and knowing me, some first aid to apply.

Living in the outdoor wonderland that is the Pacific Northwest, it’d be a shame not to utilize a tool of this quality on an off-road adventure or camping weekend. So we did both. Bombing through fire roads in our trusty, rusty adventure rig leads to getting finger gravel and other undesirable detritus stuck in our tires. If you drive a big-ass diesel truck off of a paved surface, I’m sure you’ve worried about two and a half tons of steel pushing finger gravel through a tire and leaving you stranded. Turns out Morakniv makes an awesome little pry tool to get those rock chunks out of my tires.

When it comes to digging, nothing will save your tent stakes like probing for rocks first. I jammed the poor knife into the rock-strewn loam to search for stake-killers and immediately struck something. The knife’s 1/8th inch stainless plate blade was unfazed. Morakniv makes an incredibly sturdy blade and what my wife calls a “thicc boi.”

Next up, there’s a campfire to start or no one is eating a hot meal. Now, normally on a trip, I’d have some cotton balls soaked in Vaseline in a Ziploc as fire starters, but we’re living dangerously this time. It’s a knife test, after all, so I get to try my hand at whittling fiddleheads out of some deadfall. It didn’t really have a name when I learned it, but you might know it as a “feather stick.” It tests the knife’s ability to make fine cuts and the handle’s controllability after some (severe) abuse. The Companion S  is not only still sharp but did a great job thanks to the rubberized handle and bevel angle.

I’m almost sorry to try the next test. Mainly sorry that I’m going to have to eat canned chili, but we had to test can-opening and I don’t like to waste food. I shuddered more than the knife did punching a hole through that can, but I apologized to the knife anyway. This knife deserves way more respect than I’m giving it even though it was dirt cheap. Color me impressed!

The last trial was a bit of a let-down not because the knife failed, but because there was no drama whatsoever. I ran some 550 cord between two trees to leash the dog to and cutting through the nylon was no challenge at all. The Companion S is a champ and everyone knows it. You need one and your supply guy needs a box of them for your squad. I need five.

I can’t tell you how satisfying the fit of this sheath is, you have to feel it for yourself. It has this pop that’s perfect. The belt loop is equally solid and you’re not going to lose the knife if you’ve got it set up right. The blade is super sharp and will take a truly ridiculous amount of abuse. After jabbing around in rocky soil, the blade had a slight burr develop toward the digging tip. Touching it up on a hone got it back to new in about 30 seconds. It’s not fussy.

Finally, what you get for the price is shocking. This thing isn’t some made-in-China dreck, but a legit Scandinavian tool-grade cutter. It’d be great at five times the price. Speaking of which, I hear they have a new version, the “Garberg,” which is 3/16th of an inch thick, has a full tang, is fire-starter compatible, and comes with a MOLLE compatible sheath for about $80.

What we don’t like about the Morakniv Companion S

There are very few misses with this knife. I have big hands and found the grip to be slightly too small for me. If you wear XXL gloves, you’ll probably still love the knife like I do, but the grip barely won’t fit your hands. The grip has a nice palm swell and the texture is grippy enough but my fingers were jammed a little too close together for it to be a perfect fit.

The second issue I had is with the integrated guard. It’s really just a plastic bump that can be slippery at exactly the wrong moment. If your hand is wet and you slam the knife into something hard, you’ll likely skip the guard and get a nasty cut on your pinky. I mention this because some knives have an integrated guard that would keep your hand from sliding down if you were, say, stabbing something and the knife stops. We all know what junior enlisted troops get up to and this knife is squarely for them. As an E-3, I may have witnessed a competition to bury a knife in a table. Said knife didn’t have a guard at all, was a little slippery from drunk and sweaty hands, and said troop needed a bunch of stitches across the meat of his pinky where he cut himself to the bone.

My last criticism is a little unfair because it’s right in the description, but the Companion S is not going to work well with a fire starter. We have several reasons for it, and none of them are the myth that stainless steel won’t work with a ferro rod. The spine is factory hardened (stainless air-hardens) just like the blade, so it’s not that. Morakniv doesn’t grind or polish the spine on Companion knives, so they don’t have the super sharp edge needed for striking. You can put your own square edge on the spine with some elbow grease and medium sandpaper, but Morakniv makes some other knives that come that way from the factory.

The Morakniv Companion S is possibly the perfect deployment knife for an E-3 looking for an upgrade. It hits all the right notes. First, it’s inexpensive and readily available: you can get one shipped to your door in a day or two for the cost of three beers at your favorite watering hole. Second, the Companion S is a great all-rounder: it’s good at everything and has no glaring or obvious weaknesses. The blade is incredibly sturdy, the grip does what it should, and the sheath is secure and versatile. That makes the Companion S extremely useful in a wide variety of situations. If you need one knife to do everything, and don’t want to worry about wrecking or losing your precious $150+ blade, the Companion S is the one to have. I might have a Benchmade or Gerber around, but when it comes to my money and my tools, this is the one in my go bag or hanging off of my belt.

A FAQ about the Morakniv Companion S

Q. How much does the Morakniv Companion cost?

A. The Morakniv Companion S retails for just under $15 dollars before taxes. The tester bought this knife with his own money for $17 shipped, but you can score one for $18.34 on Amazon as of press time.

A. Morakniv primarily makes partial tang knives with a few exceptions, but you’d never know it from their durability.

A. No, Morakniv knives are fixed blades that come with excellent sheaths.

Q. Where are Morakniv knives made?

A. All Morakniv products are made in Mora, Sweden, and have been since 1891.