Review: the SOG Instinct is a mini but mighty fixed blade knife

SOG does Doc Holliday proud with a modern boot knife. 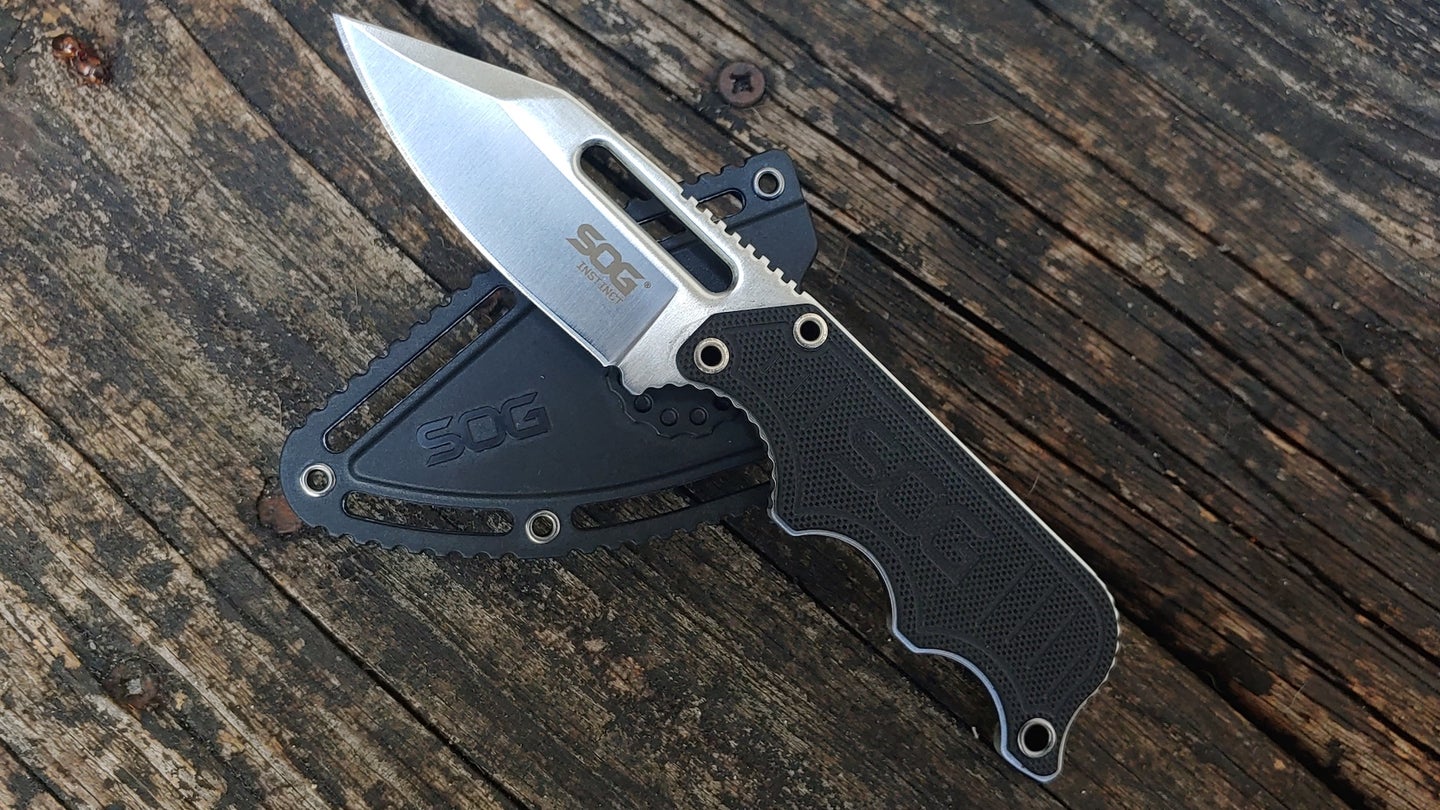 When I was a kid, I wore out the VHS tape to the 1994 film Tombstone. Parental guidance be darned, I loved that flick and the character Doc Holliday. Val Kilmer killed it, so to speak, as he did many men in the film.

I bring this up in a review of the SOG Instinct because, in the film, Holliday carried two guns and a small, fixed blade knife. In his introductory scene, he wields the little fixed blade to great effect, showing an attacker he is indeed something more than a pair of guns and a case of TB.

Since then, I’ve always appreciated small fixed blade knives. Before I purchased a high-quality folding knife, I realized a cheap fixed blade was much better than a cheap folder. Folders have more failure points in their design, from how the knife opens and closes to whatever locking system keeps the blade in place. A small fixed blade is a chunk of metal that doesn’t require any fancy mechanisms to work.

Like a folder, a small fixed blade makes for a great EDC knife. They tend to be stronger but thinner and smaller than a folding knife. Blades admittedly tend to be shorter, but that’s not a big deal for most EDC uses. Also, in a defensive situation, a fixed blade beats a folder or even an automatic knife: indeed, Doc Holliday didn’t have the time to retrieve a pocket knife and open it when a man went for his gun. A folding and automatic knife requires a moment to open it, a fixed blade merely needs to be unsheathed and it’s ready.

I’m not Doc Holliday, but there’s something to be said about the convenience and reliability a fixed blade knife provides. The SOG Instinct provides a perfectly capable small, fixed blade knife that’s useful for your average EDC task, emergency self-defense, and is completely concealable — and for just under $40, you can take one home without breaking the bank.

The SOG Instinct comes in the type of blister packaging that frustratingly requires another knife to open. Once freed, I wielded the sword in the blister packaging with ease. I admired the work; it was impressive for a $40 knife.

The SOG Instinct offers a small fixed blade knife at a great price point with a remarkable sheath. I don’t use the word ‘remarkable’ lightly, and I plan to remark on the sheath a fair bit. The knife is 5.9 inches long with a stubby 2.3-inch long blade. It weighs a mere 2.3 ounces and is .16 inches thick.

SOG uses a cheaper stainless steel called 5Cr15MoV, which resists rust rather well. It’s not super hard, so it’s easy to sharpen, but it isn’t as tough as other premium steels. It holds an edge okay, but be prepared to take it to a stone once a week to keep it razor sharp. (For a small knife like this, it’s fine steel, but for anything bigger or for a folder, I’d go elsewhere.) The straight edge uses a traditional V grind, and the blade comes to a clip point. A little swedge sits at the top to make the knife potent for penetrating and a smooth slicer.

As you’d imagine, this is a full tang knife with G10 scales riveted for extra grip. The full tang ensures the knife remains rather rugged and strong for its purpose. The grip scales keep it from being a slick piece of steel you fight to hold onto. The grip itself features finger grooves to guide your hand and improve retention. The finger groove closest to the blade features textured jimping, as does the top rearmost portion of the blade. The very rear of the grip also has a bit of texture.

The polymer clip sheath feels robust and very durable. It uses a friction fit to provide passive retention that keeps the knife in place until you want it in your hand. The clip can be removed and swaps sides easily for ambidextrous carry. Also, the clip can be mounted at a wide variety of angles. Users can mount the knife vertically, horizontally, or at nearly any angle in between.  The clip allows for both IWB or OWB carry and is quite robust and tight. One thing SOG loves to advertise about the Instinct is its carry capability, including its ability to be a boot knife. The modular sheath makes it easy to carry any way you’d want.

How we tested the SOG Instinct

I tested this SOG Instinct in two ways: I used it a lot and I carried it a lot.

As far as use goes, I did everything from little EDC tasks to bushcraft survival work. For those little EDC tasks like opening boxes, cutting cordage, and even cutting veggies, it worked without a hitch. Even though it’s small, it can cut, and most people don’t need a big beefy blade for EDC.

Next, I was showing my wife and kids how to build a figure 4 deadfall trap, and I used the SOG Instinct to carve notches in wood, sharpen wood to a point, and the like. Here the little blade wasn’t an issue, but the ergonomics were. It cramped my hand and blistered my thumb. The super-thin handle isn’t comfortable for heavy work like this. The grip does okay, but in Florida heat, my hands sweat, and I had to constantly readjust to get a grip during the heavier parts of the work. Also, the hanging pinky means I’m not using my full hand and grip strength to carve the wood. I eventually finished the job with my Morakniv Garberg.

SOG sends the blade out extremely sharp, which I was grateful for. While it holds an acceptable edge for quite some time, it doesn’t retain that razor sharpness for long. After a week of EDC tasks, it was fine, but after my day of bushcraft, it wasn’t cutting paper smoothly anymore. Luckily the steel sharpens easily, and a Lansky Blade Medic spun it back up to par.

I carried the knife two ways on my belt and on my boot. If it’s a boot knife, I wanted to see how viable and comfortable it was. I strapped it to my Doc Martens with the sheath inward towards my ankle and went on a family outing that consisted of seven miles worth of walking. Surprisingly the thin knife and sheath never rubbed me raw and stayed in place perfectly throughout the whole day. This included roughly three hours of driving and all those miles. It’s comfortable, and if you need a boot knife, I can see why SOG suggests the Instinct.

My absolute favorite thing about the SOG Instinct is the sheath. It’s very modular and allows you to carry the knife however you want. You aren’t restricted to just your pockets. It’s ambidextrous, well made, and easy to manipulate.

I love the lightweight and short design of the knife. It’s small but still handy for most daily tasks. SOG struck a good balance between size and utility with the Instinct. As I found out, it’s no survival knife, but for EDC and a last-ditch defensive option, it works. The blade design is quite versatile without getting hard to sharpen.

Sharpening also takes no time at all, which I’m grateful for when testing knives. I like keeping them mostly razor-sharp, though, and I found myself sharpening the Instinct quite a bit. Once razor-sharp, it drags its way through cardboard, 550 cord, bell peppers, and more without complaint. It’s a solid little blade design overall.

I’m not a big fan of 5Cr15MoV or typing 5Cr15MoV. It’s okay for this knife, but I find myself thinking, man, can I get an S30V model of the Instinct? 5Cr15MoV keeps the price point low, but I like my razor edge to last a little longer. As such a small knife, it doesn’t need super-strong steel, but that doesn’t mean we can’t have an Instinct premium, right?

The SOG Instinct provides a fixed blade alternative to folding EDC knives. If you want something simpler that’s not confined to your pocket, you might have a hard time finding something more affordable and effective than the Instinct. The included sheath frees you from pocket supremacy, and the blade size and design make it quite useful for EDC tasks. As a last-ditch self-defense tool, it can create distance, deal damage, and allow you to escape with ease. It’s not a dedicated fighting knife, but it’s better than harsh language and ill intentions.

FAQs about the SOG Instinct

Q: How much does the SOG Instinct cost?

A: Depending on your state, carrying a fixed blade might be illegal or may require a concealed carry license.

Q: Is the SOG Instinct a neck knife?

A: Anything’s a neck knife if you have a strong neck! But, yes, the SOG Instinct could be used as a neck knife. However, the Instinct Mini might be a better choice.

Q: Can I use MOLLE adapters/TEK LOK/OWB clips etc with the sheath?

A: Not unless it’s specially made. The ‘lashing’ holes are too small for any adapter I’ve used.