Review: Will the Wuben C3 flashlight really ‘light up your life’?

Let's see if this is nothing more than Chinese-made junk. 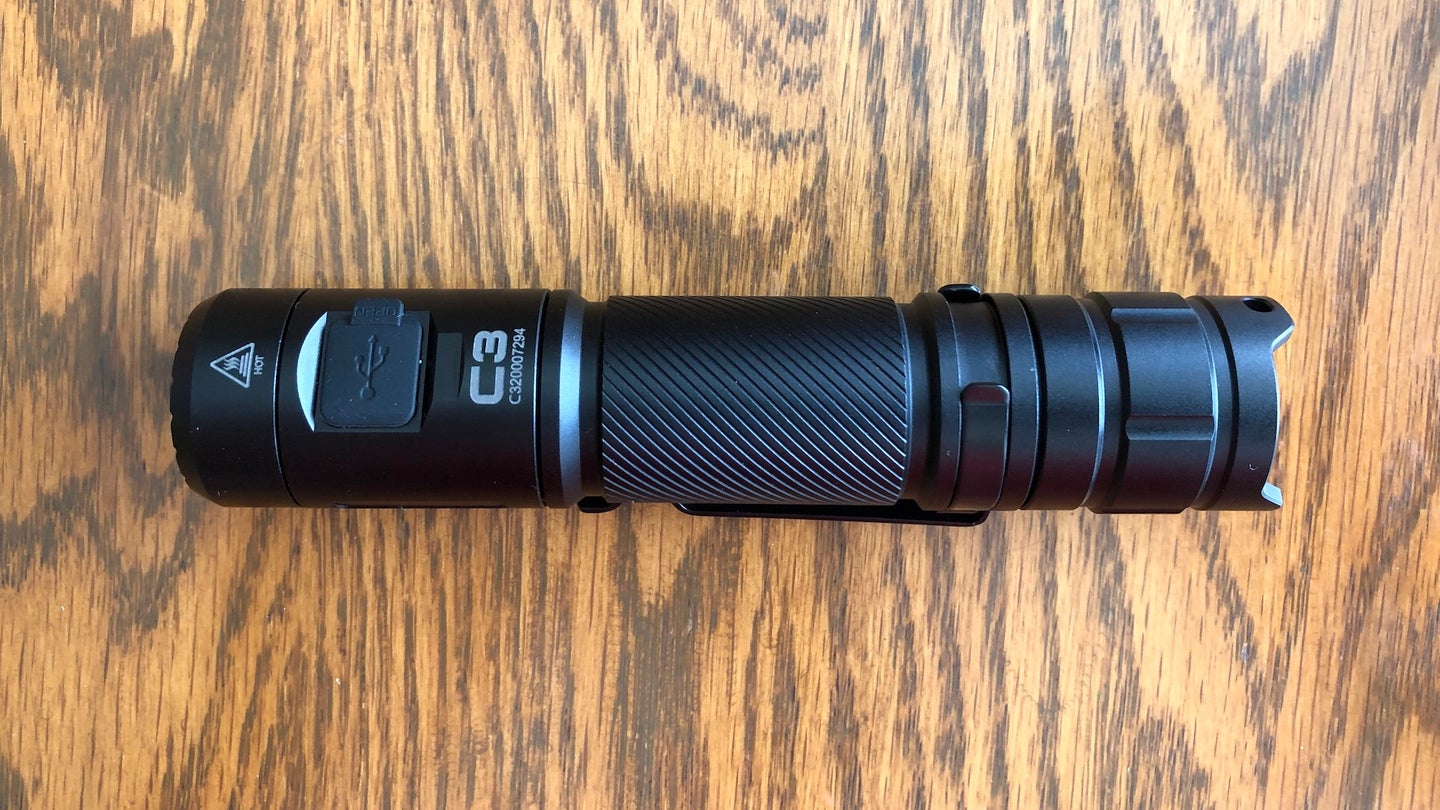 For years now, Chinese manufacturers have been flooding Amazon with inexpensive products, many of which have tended to be cheap knockoffs of quality American products. A couple of years ago, I ordered “merino wool” t-shirts from China. Roughly a month later, my shirts arrived with “Gildan” and “100% cotton” printed on the tags. After months of wrangling with Amazon on the third-party seller, I finally got a refund, but the entire experience ruined me from buying from any Chinese sellers ever again.

As such, it may not come as a shock to learn that while writing reviews for Task & Purpose, I’ve done my darndest to avoid even touching products from Chinese manufacturers and retailers. That said, every so often, my editor sends me a random product, and this month, I received the Wuben C3, a Chinese “tactical” flashlight that needed to go through its paces for you, our readers. As such, I plugged my nose and prepared to give this new hunk of metal a fair test, or at least as fair a test as I could muster.

Honestly, the C3 didn’t strike me as a terrible flashlight on the surface, and the $25ish price tag is pretty alluring. Most tactical flashlights tend to run in the $35 and up range, but on the flip side, lower cost usually translates to lower performance. Still, Chinese companies do have the advantage of skipping the American middlemen which could mean more bang for the buck. While the Wuben C3 clearly could not compete with high-end SureFires, maybe it had what it takes to challenge low-end tactical lights. I guess only time and a good bit of testing would tell.

I must admit that, while I’m not a big fan of Chinese products sold on the U.S. market, I did appreciate the Wuben C3’s packaging. It was a simple brown cardboard box with plenty of data printed on various panels in a smart, tasteful way. The flashlight inside was encased in a thin plastic sleeve and rested inside a removable cardboard frame that framed it rather nicely. Underneath the light and sleeve, I found an instruction sheet, a USB-C charging cable, a lanyard with a cinching slide, and two spare O-rings, all ready to go.

Upon picking up the flashlight itself, I was immediately struck by how heavy it was, especially compared to my Streamlight ProTac 1L-1AA. I checked the specs and found that the anodized aluminum C3 weighs 2.75 ounces empty and a weighty 4.34 ounces with the battery installed. That said, it felt sturdy and well-made, like you could actually launch it through a brick wall, and the laser-etched body provided plenty of ridges and grooves for a good grip. The lens-end bezel has subtle, swirl-pattern grooves to let light shine through when placed lens down, although in Eco mode, seeing light at the end of those tunnels is all but impossible during daylight. The USB-C recharging port and clicking tailcap switch both include silicone covers, and dual protective aluminum flanges prevent users from accidentally activating the light. The C3 also included a silicone-protected charging indicator light, and a (removeable?) rotating clip that obviously was not made for deep pocket carry.

Removing the tailcap to access the battery revealed quality threading, and while not quite on par with my Streamlight, it still provided plenty of stiffness and, presumably, protection against ingress by either water or dust (as implied by the C3’s IP68 environmental resistance rating). When I removed the recharging port cover, it demanded a bit of extra attention to seal properly. An unfocused user could easily forget to close it down all the way, providing an ingress point for dust or water.

The tailcap switch comes with a mode memory, which allowed me to keep it on my preferred setting at (almost) all times. To change to one of the six modes (Eco, Low, Medium, High, Strobe, and SOS), I only had to lightly tap the switch with my thumb, an adjustment from my EDC Streamlight. I quickly noticed that this made switching modes easier than I would prefer, and switching to Strobe or SOS took a bit of muscle memory repatterning. I also discovered that once the switch is activated, a very short twist of the tailcap will both turn off the light and allow you to cycle through each mode, including Strobe and SOS with a twist pattern corresponding with the click patterns (dual and triple clicks = dual and triple twists).

In terms of lighting, the Wuben C3 does pretty well. On Eco mode, it puts out five lumens and features a 143-hour runtime rating, While on High, those numbers change to 500 lumens and 2.5 hours. (The included documentation states that the C3 can hit 1,200 lumens for a full minute, but I was never able to figure out how to hit that four-digit number.) Max throw for the C3 hits 179 meters, while light intensity tops out at 7985 candela, a very respectable number.

At just over 4.75 inches long by one inch in diameter and over 4.3 ounces fully loaded, the Wuben C3 is no pushover. Add in an IP68 dust and water resistance rating and a 1.5-meter drop resistance rating, and the C3 certainly earns some impressive numbers.

How we tested the Wuben C3

Due to my lack of familiarity with the Wuben pedigree (and my own perverse desire to see it fail spectacularly), I decided to put the C3 through the wringer. In addition to subjecting it to standard EDC and performance regimens, I devised a couple of additional tests to see if it could live up to its tactical billing. Specifically, I decided to test it for heat production, impact resistance, and water resistance. As such, I subjected it to two heat tests, two impact tests, and three submersion tests in the following order.

Wuben did a solid job of making the C3 a solid, reliable flashlight that may just be worth your cold, hard cash. The company worked hard to brand itself as a quality manufacturer with a solid product to match. The packaging looked and felt good in hand, exuding quality with only minimal grammatical errors distracting from the overall feel. (I hate packaging with grammatical issues, especially when it comes to Chinese products.)

The lightweight Wuben C3 performed well as flashlights go, generating decent brightness, a wide variety of available modes, and a switch memory that remembers the last mode the light used. The battery/charging indicator light activates when charging or to signal the battery’s power level when the light is first switched on. It absorbs and dissipates heat better than my Streamlight, making it better for using during extended periods of time. It came with good quality extras, such as the charging cable and lanyard, and the IP68 and impact resistance ratings are another bonus. All in all, it’s a good little flashlight.

The Wuben C3 does disappoint in a few areas. Most significantly, it is NOT a tactical flashlight. While it certainly is a tough light, its impact resistance isn’t where I’d want it to be for use in a firefight, and the lack of firearm mounting accessories further handicaps its ability to compete with the big boys, like SureFire and Streamlight. Plus, the lack of a clear 1,200-lumen output mode and the lack of a momentary on feature further undermine the light’s tactical capabilities. Add in the “tactical” branding on the Amazon listing, and suddenly, the Wuben C3 feels a bit like a fake, an airsoft “pro” masquerading as an Afghan veteran.

This flashlight also lacks the necessary features one would want in an EDC light. The C3 is both heavy and bulky, and the non-adjustable pocket clip sits too low on light to allow for low-profile carry. Instead, a full 1.25 inches of tailcap sits exposed whenever the light is clipped into place.

Beyond these cons, there were a few others that, while certainly not dealbreakers, were a bit disappointing. Honestly, the warranty was less than impressive and was hidden away in fine print inside the instructions, somewhere few people are likely to look. I also found the position of the charging port, opposite the indicator light, could make it hard to see the light while charging, an inconvenient annoyance, but again, not a dealbreaker.

Overall, the Wuben C3 is a decent flashlight most at-home on a nightstand, in a junk drawer, or maybe as a backup in an emergency kit or bug out bag. It certainly can handle plenty of environmental hazards, and it has a good, sturdy construction that will absorb its fair share of abuse. That said, the C3 is no tactical light, and it probably is not the best choice for an everyday carry flashlight. In the right role, this Wuben will shine brightly, but in the wrong one, it could leave you floundering in the dark.

FAQs about the Wuben C3

Q. How much does the Wuben C3 cost?

A. On Amazon, you can snag the Wuben C3 for around $25, although the listed non-sale price puts it closer to $30.

Q. What kind of batteries does the Wuben C3 use?

Q. Where is the Wuben C3 made?

A. The Wuben C3 was made in China, not at all shocking considering Wuben is a Chinese company.

Q. Is the Wuben C3 a tactical flashlight?

A. Like the vast majority of Chinese “tactical” products, the Wuben C3 lacks the critical features to make itself a truly viable option in a tactical setting. As such, the C3 qualifies more as a tough “tactical style” flashlight than anything else.