Review: Why the Streamlight ProTac 1L-1AA should be your EDC flashlight of choice 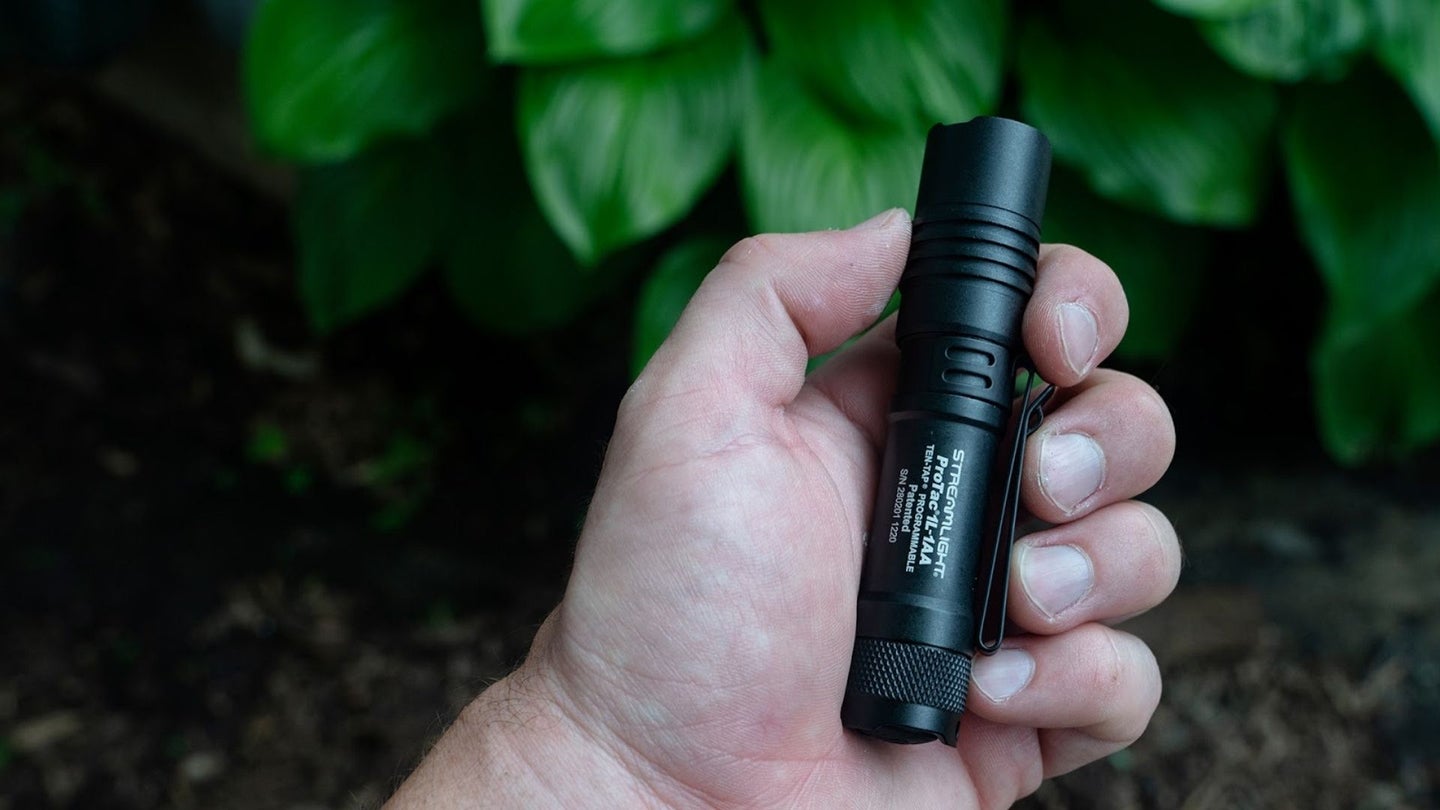 I’ve been a bit of a nerd for flashlights ever since I was a little kid. I was always saving up change to buy some new flashlight, comparing them with whatever my friends had, and running around the woods like a wild child. When I eventually turned in all my CIF gear at the end of my time in the Marine Corps, what hurt the most was giving up my issued flashlight. Turns out that wasn’t such a big deal; they’re on Amazon for like sixty bucks.

I may not need an IR strobe anymore, but every responsible adult needs at least one good flashlight––preferably more. Naturally, I became curious about the little Streamlight ProTac 1L-1AA from the same company that makes the military light I liked so much back in the day. I figured something like this was way more practical and, frankly, more useful than a dedicated weapon light and decided to give it a try.

Weight: 2.4-2.8 oz, depending on battery selection

You know how people say not to judge a book by its cover? That sentiment definitely applies to the Streamlight ProTac 1L. This flashlight comes in plastic packaging designed for hanging display racks, and it looks like all the cheap flashlights I’ve ever seen at a checkout counter. Fortunately, it’s what’s inside that counts.

Editor’s note: the Streamlight ProTact 1L-1AA also made Task & Purpose’s roundup of the best EDC flashlights of the year.

Inside the packaging is the ProTac 1L-1AA, a MOLLE-compatible soft case, one alkaline AA battery, and one CR123 battery. Either battery will work without modifications or extra pieces, which is a great option to have. They perform a little bit differently, but more on that later.

The flashlight is built from 6000-series aircraft-grade aluminum, impact-resistant borofloat glass, and rubber seals to keep water and grime outside, where it belongs. Light comes from a shock-resistant C4 LED with a 50,000-hour lifespan. The whole thing is only 4.25 inches long and less than an inch in diameter, making it about as portable as a tube of chapstick. Carry it in the case or with the metal clip. The clip is S-shaped, so you can make the light point either direction––nice touch, Streamlight.

How we tested the Streamlight ProTac 1L-1AA

What do you think, did I run-and-gun with this bad boy in a MOUT training facility? Did I go full John Wick on an unlucky set of steel plates at my local range? Sorry to disappoint you, but no. I used this light for things I would actually buy it to do.

I lit the way to take my dog, her royal highness, on early-morning and late-night walks. I scanned the sidewalks for water moccasins on my walk to the gym because apparently, that’s a thing I have to watch out for here. Ask me how I know. I also jabbed this little light into all the nooks and crannies of my engine bay in search of a small but annoyingly persistent oil leak. It was always bright enough for what I needed, and in some cases, the dim setting was just the ticket for preserving my night vision or not blinding me when it bounced off shiny exhaust headers.

This seems to be the year of eternal rain here in north Texas, so the ProTac also got plenty of exposure to heavy downpours and soggy pockets. Just before closing the books on this test, I soaked it in water for 30 minutes and tossed it in the freezer overnight. The next morning, the little light that could flashed to life on the first try. The button was a little stiff, but even with a thick coating of frost, the Streamlight still worked.

The first thing that jumps out about this light is its value. There are plenty of $40 flashlights that don’t hold a candle to the ProTac 1L. Its maximum output of 350 lumens isn’t exactly blinding, but it’s more than enough to cut through the dark. The aluminum body is a giant improvement over the cheap plastic used in most flashlights of this size, and a little bit of water resistance never hurts. The one-meter rating means that you shouldn’t go swimming with this flashlight, but rain shouldn’t be an issue.

Aside from being tough, tactical lights need to be versatile. They should provide a soft glow when you need to reference your map or check your gear, and a bright beam when you need to pierce 100 meters or more into the night. A strobe function is also important for anyone who plans on using their light on life’s two-way rifle range. The ProTac 1L-1AA does all of these things. That makes it not only a solid EDC, but also a tactical choice when you need something small and inexpensive.

Speaking of size, this little Streamlight is compact enough that I wouldn’t mind carrying it just about anywhere. There are obviously more powerful options, but if they’re so cumbersome you always leave them at home, what’s the point of having them? This is something I’d keep by my bed, toss in the glovebox, or add to my camping pack. It can even be clipped to a hat brim for a makeshift headlamp.

What we don’t like about the Streamlight ProTac 1L-1AA

Most people in the market for a tactical light will probably want to mount it to a firearm of some sort. You can certainly do that with the ProTac 1L-1AA with various attachments, but that’s not what it was designed for. If you insist on mounting this light, you’ll need to track down a mount separately and you still won’t have a pressure pad to turn it on and off. Durability is another question mark. The aluminum body and sealed threads are great for everyday use, but I wonder how this light would hold up to the shock of recoil when hard-mounted to a firearm. Streamlight makes other flashlights for mounted use, so give them a look if that’s what you want.

Battery life isn’t spectacular, either. Squeezing all the power you can get out of this flashlight will leave you in the dark in just one hour and 20 minutes. Use a lithium AA battery on the low setting, and you’ll get 14 hours of use. This is to be expected of a compact flashlight, but it’s worth keeping in mind. Having a few extra lithium AA batteries around the house is a good idea. If you prefer the extra juice of the CR123 battery, you’ll definitely need replacements frequently. Don’t even bother with an alkaline AA battery, which provides less power than a lithium AA battery and a shorter lifespan than a CR123 battery.

If there are mixed opinions on this light, I’m willing to bet they stem from its classification as a tactical flashlight. It’s durable, matte black (and available in the obligatory coyote brown), accepts multiple types of batteries, and can be toggled between high, low, and strobe settings. That should be enough to qualify as a tactical light. If people are underwhelmed, they were probably expecting a rifle-ready light with rail mounts, a pressure pad, and higher-powered illumination. Those things are also tactical, but I wouldn’t expect them at this price. The ProTac 1L-1AA earns its keep as a value option. There are cheaper and more capable options, but this hits the sweet spot for everyday use.

Should you buy this flashlight? Sure, it’s useful and the price is right. Every car should have a flashlight in it for emergency situations. So should every bug-out bag, camping pack, and nightstand. You wouldn’t be wrong for adding one to your EDC. The ProTac 1L-1AA is a solid option for all of those reasons, and having a strobe function is icing on the cake. Keep this thing in its element and you’ll be glad you have it.

It’s no secret that training and preparation are more important than the gear you bring to a fight. The best tactical flashlight for you isn’t necessarily the brightest, most durable, or most expensive––it’s the one you’re willing to train with the most. If having something small, versatile, and inexpensive will get you to use it more, I’d say you’re better off with that than a high-speed piece of gear you never get your hands on.

FAQs about the Streamlight ProTac 1L-1AA

Q. How much does the Streamlight ProTac 1L-1AA cost?

A. This is an entry-level tactical light, so you’ll only need to shell out about $40 for one. There’s a good chance you can find a discount, too.

Q. Does the Streamlight ProTac 1L-1AA have multiple lighting modes?

A. Yes, there is a low beam, high beam, and a strobe function. All three modes are accessed using the power button. Furthermore, the battery you choose will affect this flashlight’s brightness and battery life.

Q. What kind of battery does this flashlight use?

Streamlight provides a helpful graph showing how different types of batteries perform if you want to compare your options. Unless maximum brightness is a priority, I’d take a few extra hours of battery life every time.

Q. Is this light cut out for tactical use?

A. Tactical can mean a lot of different things. If you need a convenient flashlight for your nightstand or glovebox, then this should serve you just fine. It’s durable, compact, light, and has the strobe effect that you’d expect from a tactical light. I’d be just as comfortable using this light to do an early-morning brisket check as I’d be clearing my house with it when something goes bump in the night. On the other hand, if you’re regularly kicking in doors for a living, you’re better off investing in something stronger and brighter that’s easier to integrate into your existing weapon system.

As an EDC light, this is a great option. For dedicated tactical use, I’d look for something with a pressure switch and rail mount ready to go. A rechargeable option with a USB input might be worth looking at, too.

Q. Can this light be mounted to a weapon system?

A. Sure, anything can be MacGyvered to your firearm if you try hard enough. I’m sure there are even rail mounts set up for this diameter of light, and that might be an option if you’re on a tight budget. If you can spend a little more, though, I strongly encourage you to move up the food chain and get a light that was designed for that kind of thing. Streamlight has options in its catalog, and there are other manufacturers to choose from.

My advice? Let this thing do what it’s good at and make it your EDC flashlight, not your only flashlight.